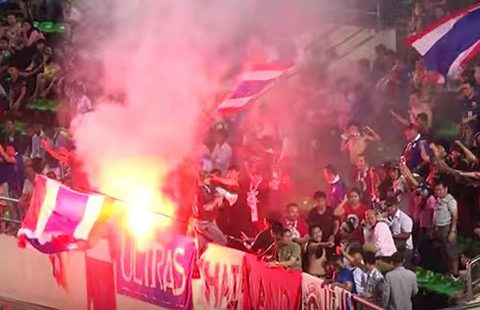 The Lao National Stadium at Kilometer 16 in Vientiane.

Clashes at a recent match between Thailand and Vietnam highlight historical rivalries and nationalist violence.

Nationalism does not “finish.” It must continually reassert itself as long as nation-states remain the world’s hegemonic political unit.

This self-reassertion often takes the form of contestation–defining the nation by who is inside and outside of it–which generally results in violence.

I was viscerally reminded of this on 4 September, when my Facebook news feed was flooded by videos of the violence that broke out at the Asian Football Federation U19 Championships in Vientiane, Laos.

Thailand was in the process of blowing out Vietnam, with a final result of six nil. In celebration, the Thai supporters began lighting and waving signal flares. A team of Lao police went into the stands, presumably to make sure that nobody got hurt, and were met with a violent backlash from the Thai supporters.

Chaos erupted, and a gunshot was fired, as you can see from the most widely circulated video of the event.

It is likely obvious to the viewer that the men in green and beige uniforms are Lao police; likewise, it is safe to assume that the other people in the filmed area are mostly Thailand supporters. As the Lao cops enter the crowd, the Thailand fans create a kind of “human wall” to prevent the authorities from accessing the Thai supporters’ space.

Many of the Thailand fans never stop cheering or clapping, throughout the whole fracas. As the clip ends, bottles begin to rain down from higher levels of the stands; according to many in the Lao Facebook-sphere, the bottles were coming from the Vietnam supporters’ section.

S├╕ren Ivarsson argues in Creating Laos that the emergence of the Lao nation state and Lao geo-body were the result of contestations between expansionist Siam and a French Indochinese government that wished to encourage Vietnamese expansionism. The link between sports–especially soccer–and nationalism is well documented; sports teams represent a form of safe, sanctioned, and regulated nationalist violence.

In this match, a Lao nationalist space (the Kilometer 16 National Sports Stadium) is host to a battle between the embodied nationalisms of Thailand and Vietnam. Thailand wins the soccer match by a landslide; Thailand’s cultural sway in Laos is apparent to anyone who visits the country.

We should be suspicious of this metaphor: although it is coherent, it is overly simplistic and does not take into account the extraordinarily complex and nationalistic violence occurring in the stands. To understand what the violence in the stands has to do with nationalism, it is necessary to consider the genesis of Lao communist nationalism in more detail–and, particularly, how Lao nationalism intersects with Thai and Vietnamese nationalisms.

As noted by Grant Evans in his Short History of Laos, one of the primary tasks of Lao nationalism has generally been to differentiate itself from all things Thai. The political structure of Laos in comparison to Thailand is one of the main axes along which this differentiation has occurred. Laos is a communist state, with a long-deposed monarchy; in Thailand, the monarchy is the backbone of nationalism.

In spite of the close linguistic and cultural ties between Thailand and Laos, the current incarnation of Lao nationalism is linked much more closely with communist nationalism in Vietnam than with Thai monarchic nationalism.

While I was living in Vientiane, I occasionally heard my friends refer to Vietnam as the “elder brother” of Laos; the political connection between Vietnamese communism and Lao nationalism begins with Souphanouvong and Kaysone and continues to the present leadership of the Lao People’s Revolutionary Party. 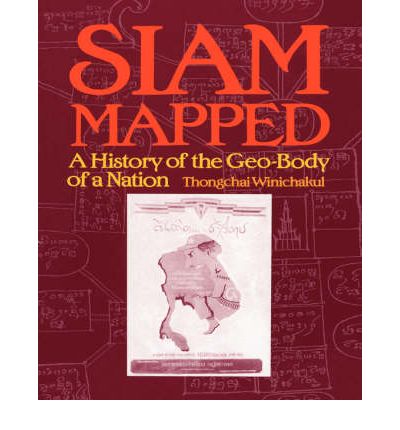 The front cover of Siam Mapped.

In Thailand, communism in all its forms has been demonised for decades. A 1970s political cartoon–now famous as the cover illustration to Thongchai Winichikul’s Siam Mapped–nicely illustrates anti-communist feeling in the context of Thai nationalist politics: Vietnam, Laos, and Cambodia are lumped together and anthropomorphised as an angry communist insurgent, taking a big bite out of the Thai geo-body.

In this cartoon, communism is a visceral threat; the caption above the cartoon exhorts, “Wake up, Thai people!”

The hooligans at the soccer match may not have had this cartoon in mind, but it is certainly plausible that the Thai nationalist sentiments expressed in “Wake up, Thai people!” were at play in last week’s violence.

The Lao police officers, in their beige and olive-green uniforms–which are nearly identical to those used by the Vietnamese police, and utterly different from Thai police uniforms–represent a threatening communist nationalism, historically foregrounded in the aforementioned political cartoon.

It is significant that the violence at the soccer match escalated considerably after the Lao police damaged a Thai flag.

Flags and national soccer teams are signs of nationalism par excellence; so are national police forces. By attempting to dampen the celebrations in the Thai supporters section of the stands, the Lao police were tacitly joining the side of the battered Vietnamese team.

By damaging a flag, the Lao police in their communist regalia damaged the sanctity of one of the most powerful symbols of the Thai state, thereby affronting the Thai nationalist cause–perhaps, in the eyes of the Thai soccer fans, aligning Lao nationalism with Vietnamese nationalism against Thailand.

The bottle salvos that came at the end of the violence are less visually intelligible as nationalistic, but it is telling that many on the Internet have been quick to identify the bottle throwers as Vietnamese.

It is possible that the Lao police were provoking certain spectators, or making unreasonable demands. It is also certainly possible that the Thai fans assaulting the Lao police were a small and heavily intoxicated subsection of the total number of Thai spectators at the event, most of whom were likely peacefully celebrating their team’s well-deserved victory over the Vietnamese side.

Nevertheless, the nationalist connotations of international soccer matches have been well documented, and I think it would be erroneous to ignore this aspect of the violence in the bleachers at the AFF Championships.

This is not the first time that nationalist violence has erupted off the field at an international soccer match in Southeast Asia; the riots that occurred after Myanmar’s loss to Indonesia in the 2013 Southeast Asia Games should come immediately to mind.

Still, I do not think that these incidents of nationalist hooliganism should be cause to end the practice of international soccer matches. Instead, they should be understood as a call to critique the violence that is inherent in nationalist sentiment. These critiques are already occurring in the Lao Facebook-sphere, and I hope that they continue.

Ultimately, 25 Thai spectators were arrested, and the Thai embassy in Vientiane issued a formal apology.

To my knowledge, no public words have yet been heard from the purportedly Vietnamese bottle-throwers. Knowing that the Lao police officers were carrying loaded firearms and were obviously ready to deploy them, I am grateful for their composure. There have been no reports of anyone being shot or seriously injured.

Nationalist events such as Asia’s U19 Championships and the multiple forms of violence that accompany them will continue for the foreseeable future, in ASEAN and elsewhere.

My hope is that nationalist violence as displayed in the above video is recognised as such, and that this particular strain of violent nationalism does not go unquestioned in the nation-states that produce it.

Mike Dunford is an MA candidate in Southeast Asian Studies at the University of Wisconsin-Madison, and a former resident of Vientiane.