Sondhi Limthongkul takes the helm of the New Politics Party

On 6 October 2009, the latest attempt to create a “real” political party in Thailand took a further step with the first general meeting of the New Politics Party (NPP), the formal political arm of the People’s Alliance for Democracy (PAD), at the Thunderdome in Mueang Thong Thani. The main purpose of this assembly of around 1,900 party members was to elect Sondhi Limthongkul party leader, and to determine the party’s executive board.

The soi leading to the venue was lined with billboards (picture 1) showing what the NPP wanted to stand for: “Dare to change – honesty, sacrifice, courageous, able to work.” The founding of the NPP included a switch from the previous yellow to green. Picture 2 shows the stall where party members could update their outfits. The PAD’s satellite TV ASTV has always been in need of funds. Donations were welcome at the stall shown in picture 3. Voting for the first party chairperson was a major organizational task, and done in a way similar to elections in Thailand. First, party members could check their membership number on alphabetically ordered lists (picture 4). As can be seen from the following detail (picture 5), Sondhi Limthongul’s membership number is 00005555.

In front of the meeting venue, tents had been erected with rows of tables carrying computers and printers, used by the staff to register arriving members and provide them with their identification cards (pictures 6 to 8). At the end of the procedure, they received the conference documents (picture 9), collected in a booklet entitled, “Agenda of the first general assembly of the members of the New Politics Party” (picture 10). According to this booklet, as of 30 September 2009, the NPP had 8,922 members, 57 percent of who were women. The regional distribution was as follows: Bangkok 19%, central Thailand 37%, North 16%, South 17%, and Northeast 11%. Most of the members seemed to be shopkeepers since 48% gave their occupation as “thurakit suan tua.” Active and retired civil servants made up 16%, farmers 14%, employees 7%, employees of state enterprises 5%, and students 1%. The remaining 9% provided no information.

The number of party members still seems to be small. However, the party’s action plan envisages reaching 500,000 members and establishing 40 branches within the year 2010. At the end of 2011, every province should have one branch, and there should be 200 district as well as 1,000 tambon centers, serving one million party members. One year later, there should be 600 district centers and 4,000 tambon centers with five million members. Thaksin Shinawatra does not seem to be convinced that this will work. In an interview with the Economist (online, 15 October 2009), he said, “I don’t think there are too many hard-core yellow shirts, if not being supported by Democrats and by military, and the reason they were supported by military is because the so-called elite instructed them.”

The NPP plans many activities to train leaders, change agents, and party functionaries. Obviously, this is an ambitious plan. It will also not come cheap. The budget for 2010 is set at 117.9 million baht, while fund raising activities are supposed to generate 214 million baht, 120 million of which should come from membership fees.

Picture 11 shows one of the 12 polling stations. The NPP seemed to have borrowed the equipment from the provincial elections commission of Nonthaburi province (see the ECT emblem on the voting booth). Before counting started, the officials were lined up on the right-hand side of the main stage (picture 12). Voting for Sondhi Limthongkul is under way (picture 13). The result at this counting board (picture 14) was clear: Sondhi: 131 votes, 4 abstentions, and 4 invalid ballots. This outcome was not terribly surprising, because (as shown in picture 15) Sondhi was the sole candidate on the ballot paper. The overall result was 1,741 to 61 to 73 (picture 16). 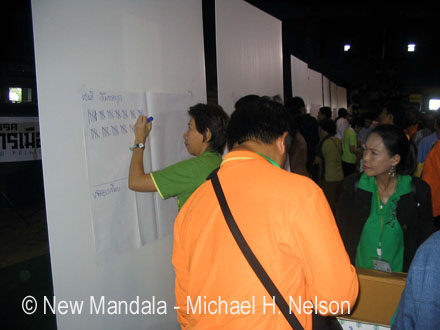 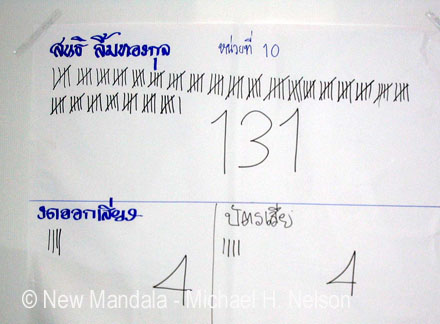 One wonders why the NPP insisted on this elaborate election procedure when it was clear who had to be elected party leader. When Sondhi went on stage (picture 17) after the “vote” people in the hall greeted him with an enthusiastic ovation. His suggestions for those party board members who he had the right to propose (others had to be elected afterwards) were approved in the most convincing form (picture 18). Picture 19 shows Sondhi on stage with “his” board members. Not surprisingly, the front page of Sondhi’s ASTV Phuchatkan newspaper of 7 October celebrated his new formal leadership position (picture 20). Dr. Michael H. Nelson is a visiting scholar at the faculty of political science, Chulalongkorn University, Bangkok, Thailand. He can be reached at [email protected].