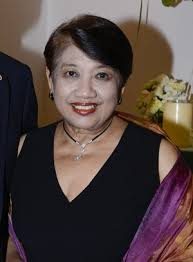 Songsuda Yodmani, a high society figure who is the current President of the American University Alumni Association of Thailand, held a much-publicized press conference on 1 June 2014 condemning what is seen as American interference in the putsch that ousted the government of Yingluck Shinawatra. Claiming that the Association was apolitical, Songsuda openly discussed politics, exploiting her position to attack the US position on the Thai coup.

Accompanying her was Suvit Yodmani, her husband, who once served as Minister of Tourism and Sports in the military government of General Surayud Chulanond. Interestingly, the Surayud government was formed in the aftermath of the 2006 coup that toppled the Thaksin Shinawatra government. A question must be raised here about whether the Yodmani, in defending the coup makers now, might have enjoyed certain kinds of benefits of past and present military rule.

It is important to emphasise that Songsuda is a daughter of one of Thailand’s most notorious despots, the late Field Marshall Thanom Kittikachorn. A staunch anti-communist, Thanom oversaw a decade of military rule in Thailand from 1963-1973, until public protests, which exploded into violence, forced him to step down. His homecoming from exile in 1976 sparked protests, which led to a massacre of demonstrators at Thammasat University. This was to be followed by another military coup.

Throughout Thanom’s period, Thailand had worked closely with the United States, in constructing Thai policies that were essentially anti-communist, pro-American and pro-monarchy. Even in his exile, Thanom ran away to settle in Boston for a while. In other words, the United States became both the Kittikachorn’s second home and a political shelter. Sadly, Songsuda seems to have lost her affinity for the United States, the very country that gave her education. She graduated from Harvard University.

At the American University Alumni Association, Songsuda made her point clear: her press conference would be conducted in an amicable spirit, as friendly advice to the United States for its continued meddling in Thai political situation. Songsuda strongly criticized the statement of the US State Department that rejected the rationale behind the coup, that questioned the vagueness of the junta’s roadmap, and that called for the coup-makers to return power to the Thai people as soon as possible.

Songsadu then began to lecture the United States about Thailand’s long and immaculate history as a nation, which has remained independent for more than 800 years. To Songsuda, Thailand is a proud nation and knows the diplomatic savoir vivre for it has never interfered in other countries’ affairs, particularly never into American domestic affairs. Thus, as the United States doubted the junta’s roadmap, it revealed that the United States took its relations with Thailand for granted. It is important to remind the State Department to treat Thailand as an equal partner. “We are independent nation. We are not colony of the United States. We will defend the pride and dignity of the Thai nation”, Songsuda reiterated.

Supporting his wife, Suvit took the media limelight by asserting that the US’s own history was also punctuated by periodic political traumas, from relentless reforms to the abolition of slavery and the civil war. This may have taken the United States some 25 years before it could find a peaceful solution. Suvit said, “The United States therefore must understand that each country has its own political uniqueness.” To say that reforms in Thailand should be shortened to less than 1 year illustrates the naivety on the part of the United States.

Suvit also added, “We lost 20 lives and more than 700 people were injured. They were our great losses. I must stress that the roadmap that will now take 1 year and 3 months will surely not be enough to guarantee successful political reforms”.

Together, Songsuda and Suvit delivered words that endorse the legitimacy of the coup. This has been the latest desperate attempt of representatives of the conservative elites in creating a discourse of Thailand’s political uniqueness which must earn some kind of respect and acceptance, without any criticisms from the outside world.

Perhaps the Yodmani might be interested in some facts regarding Thailand’s foreign policy and its intimate ties with the United States in the past decades. The claim that Thailand had never interfered in any other countries is also wrong. One clear example demonstrates how Thailand became inexorably involved in the Cambodian conflict in which the Thai troops offered different kinds of assistance to the Khmer Rouge, with the backing of the Americans.

Under the bilateral military alliance treaty, the Thai army has continued to gain most from its American counterpart, in terms of financial support, transfers of military equipment and the annual military exercise under the codename Cobra Gold. Long years of receiving benefits from this alliance have shaped the making of Thai foreign policy to be rigidly pro-US, to the point of Thailand sacrificing its own decision making power. From being obliged to support the US’s War on Terror to the surrender of Victor Bout, the Russian arms smuggler, to the US authorities, Thailand has lost a degree of its independence in managing its own affairs.

In the game of international politics and as a medium-sized country, Thailand has only some bargaining power vis-├а-vis key countries, like the United States. More importantly, as a member of the international community, Thailand will not be able to run away from criticisms or even other kinds of tangible interventions, such as in the form of sanctions, should Thailand choose to disregard democracy and adopt totalitarianism. The United States is only doing its job as the so-called defender of the world’s democracy. Frankly speaking, for most of the time, the United States has been accused of paying just lip service and lacking in sincerity in promoting democracy in countries where its national interests are limited.

Songsuda has tainted the reputation of the American University Alumni Association by taking advantage of her position in justifying the shameless coup. While the love for dictatorship might not be genetic, Songsuda’s action has proven to us that democracy has become a disgusting ideology for those old and new elites who have refused to recognize that Thailand’s political landscape has over the years changed tremendously.