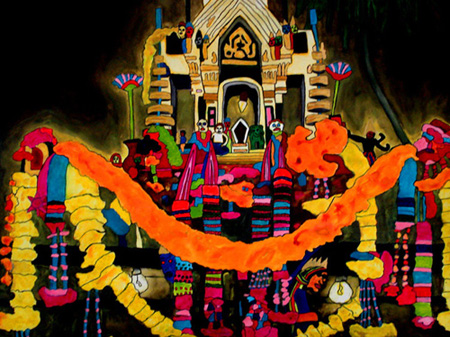 This is a post about German Expressionism and how I see its relationship to the cultural movement known as South East Asia Noir.

I’m not writing as an academic or art historian but as an artist, about what it is I find so interesting and like about the Expressionist vision and how I use it in my own Expressionist-style noir paintings set in South East Asia.

Since I can remember, I’ve always liked Expressionist art and my favorite paintings are pretty much all by the various Expressionists. I find Expressionist paintings interesting, the subjects and scenes, the use of strong and often disharmonious colors, distorted images, the use of artificial night-time lighting rather than daytime sunshine and the often rough primitive technique.

Studying Expressionist paintings has been an important and crucial element in shaping my own version of an “Expressionist style”. I think it’s interesting that Expressionist art in the 1900 to 1930 or so time frame in Germany blossomed amidst a period of tremendous social change and chaos. During a period when traditional social structures were rapidly disintegrating and in the context of the large-scale slaughter of millions of people that took place in Europe in and around World War One, much of which personally touched and dramatically impacted on the lives of the Expressionist artists themselves. All of this has created consequences, some good some bad, and has often been accompanied by very high level of violence and an immense amount of physical destruction. In the 50 year time period 1963 to the present, in Southeast Asia, millions and millions of people have been killed or have died as the result, directly and indirectly, of large-scale organized violence, fraternal, internal and external.

Clearly, there are links between Expressionist art and the social and political circumstances of the Central European world of the early 1900’s within which it was created.

Just as there are links between my own work, as well as the work of other artists, writers, musicians and filmmakers working in present-day Southeast Asia, and the social and political circumstances of the societies in which they live. That’s not to say, these links between art and the broader society and social structure are necessarily didactic, straight-forward or completely clear. Nor should they be.

But these connections are nevertheless there.

So how does the Expressionist vision I’ve been describing relate to South East Asia Noir, an artistic and cultural movement which includes various writers, musicians, filmmakers and artists who are making use of modern Southeast Asia as a setting for their books, fiction and non-fiction, songs, movies and paintings? All of these writers, musicians, filmmakers and artists seem to be drawn to and make use of at least some of the following elements, circumstances, characterizations and ambiance drawn from the noir side of modern Southeast Asia.

A widespread fatalism, a kind of passive acceptance of one’s circumstances, no matter how unjust, unfair and unpleasant those circumstances might be. A resignation in the face of unavoidable Karmic burdens acquired in past lives and deeds, burdens from which there is no escape.

An acceptance of a world and social system where power is often exercised in arbitrary untransparent ways, often in shadows, hidden by darkness, away from sunlight.

A world where endemic corruption is not only considered to be “normal” and “permanent” but even “essential”.

In most of these artistic works, there always seems to be double helpings of Impunity, disenfranchisement, South East Asia Big Men, a complete lack of any meaningful Rule of Law, almost no actual rights inherently belonging to the individual.

Whether property rights, equality under the law, the right to opportunity and social mobility, the right to “civil rights” or “constitutional” rights

Individuals are frequently and arbitrarily subject to state and Big Man violence, selective and biased law enforcement, sometimes even assassination and disappearances. In these noir stories, songs, films and paintings, the world of South East Asia is often portrayed as a world in which most of the inhabitants accept their own powerlessness or impotence in the face of arbitrary and unrestrained authority, accept that they have little or no recourse in the face of widespread injustice.

Accept that large and endemic commercial sex as well as illegal drug industries are deeply and permanently embedded in the structure of their societies and that these socially corrosive industries often operate with the complicity and are sometimes even under the control of state authorities as well as the various Big Men.

Accept that, in certain geographic areas, there are organized child or underage sex businesses accompanied by inevitable social impacts and consequences.

Accept that, even in year 2013, there is indentured and sometimes slave labor, ongoing trafficking of men, women, children and babies.

Accept that there is large-scale trafficking of illegal and counterfeit goods, of weapons of all kinds as well as various drugs and narcotics.

That there are and always will be huge disparities in incomes, living standards, asset ownership, etc. etc Altogether, for the various writers, musicians, filmmakers and artists working in Southeast Asia who are inspired by and/or looking for noir subjects and themes, there seems to be no shortage of available material.

Unlike Impressionism which often dealt mainly with sunshine, pretty flowers and the illusion or dream of “happiness”, the Expressionist vision seems to have an ability to incorporate, deal with and process all the noir stuff, the “unhappy” goings-on.

Often with an almost wild enthusiasm, using some form of the rugged, sometimes downright ugly and often impolite or rude Expressionist style, combined with vibrant, off-kilter, even putrid colors and contrast. In the early days of the Expressionist movement in Central Europe, many Expressionist paintings were scorned as being way too “ugly”, too disturbing, too disconcerting, and just all around “unpleasant”.

Art critics, government officials and even ordinary people accused the Expressionists of not only being despicable, degenerate and disgusting, but also in desperate need of “drawing lessons”.

But, over time, in some weird almost inexplicable way, these very same “incredibly distasteful, ugly and disturbing” Expressionist paintings, sometimes but not always, become “beautiful”, even “important”, and are now presented to an adoring public in some of the world’s most prestigious museums, bought and sold at auctions for millions of dollars by some of the world’s most cunning billionaires.

No one quite knows why, not even the art historians or famous art critics. It’s kind of a mystery. Maybe it’s some kind of natural and organic cultural cleansing process.

Part of what’s interesting and valuable about art is that it explores and makes accessible areas of our lives, world, feelings and perceptions that might be distasteful, ambiguous, hidden or partially hidden, not easy and, perhaps even impossible, to fully understand. At the end of the day, art provides us with a place where, for a few moments at least, we can put aside our words, daily worries and various “fixed” ideas and viewpoints and absorb the colors and shapes, the relations and possible meanings between all the colors and shapes and, without physical risk or danger, let ourselves be drawn into the world of the painting with our thoughts and feelings free to wander wherever.