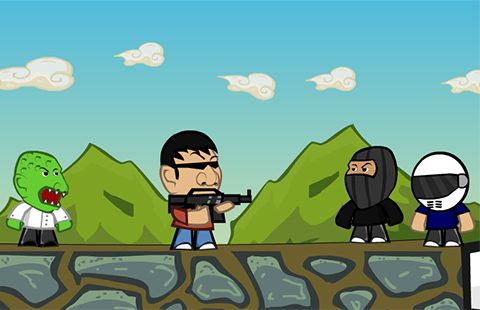 New Mandala Associate Editor Mish Khan has searched the darkest corners of Southeast Asia to bring you the wonderful, the weird and a heavy dose of the WTF?!

This is the tagline of the new gaming app, “Go Duterte”, which allows you to play as macho presidential candidate Rody Duterte as he slinks the streets of the Philippines, killing criminals and corrupt politicians while unlocking a sophisticated arsenal.

Duterte, the polarising and popular mayor of Davao, entered the Philippine presidential race at the last minute in a move which jolted all other contenders/pretenders. He is well known for transforming Davao from a crime ridden and corrupt city to one of the safest in the world, trailing only Osaka, Seoul, Singapore and Bursa (that’s in Turkey in case you hadn’t heard). A screenshot from the app.

However, some of the legend may be more fiction than fact. Duterte is also widely despised by human rights groups for his links to death squads in Davao which have been used to eliminate crime.

The game so far has 1,000 downloads and a 4.9 star rating, with reviewers stating they are happy to ignore bugs to jump on the Duterte train.

Convenience store ban to make teenage sex inconvenient
Local administration of the Islamic Luwu district in South Sulawesi, Indonesia have decided to ban the sale of condoms in convenience stores in order to combat the growing peril of casual teenage sex.

District head Andi Mudzakkar said that he made the decision after noticing that condoms were sold openly in the stores and could be easily bought by youth.

Letters will be sent to stores notifying them to cease supply within a week, followed by impromptu raids. Non-compliant stores will be shut down. Condoms are still available for purchase in pharmacies, but only to those aged 17 and over.

The decision has been criticised as misguided by activists, who say there is no guarantee banning the sale of condoms will reduce premarital sex and will instead lead to risky sexual behaviour.

Phallic tattoo too taboo for female judge
Maung Saungkha, the Yangon poet who fled from authorities after penning a verse in which the president’s portrait was tattooed on the narrator’s penis, was arrested earlier this month after attending a trial against student activists to show his support.

Now facing court, Saungkha’s lawyer and prominent legal activist, Robert San Aung, has delayed proceedings by arguing that it would be culturally inappropriate in Myanmar for a female judge to oversee the case. Given that Saungkha may have to “show evidence” he does not bear the tattoo, Aung argued that her replacement by a male judge was necessary.

The request was granted, and a male judge will preside over the next session on 4 December.

Saungkha is one of several to be charged in Myanmar for defamatory Facebook activity. This has raised criticism that Facebook should do more to warn users about self-expression in a country with vague, abusive defamation laws.

What the Phuc? Blatantly fake Vietnamese name goes viral
The Australian man behind the punny Vietnamese pseudonym “Phuc Dat Bitch” that went viral earlier this month has admitted that the status was simply a prank between friends which blew up.

Tin Le posted a photo-shopped image of an Australian passport complaining that the unfortunate phonetic reading of his Vietnamese name had caused him to be banned from Facebook several times. After the image went viral, he received an outpour of support from others. The story was picked up by major media outlets around the world, none of which bothered to confirm the veracity of the image, despite “Bich” not being a commonly used Vietnamese surname and other experts noting that the passport image clearly looked doctored.

The BBC even offered a guide to how to pronounce the name. Learn how by watching the video below.

And what did the man formerly known as Mr “Bich” have to say about it all?

“I’ve concluded not to trust the credibility of the media, it’s twisted by the hungry journalists who mask the truth … It goes to show that an average Joe like myself can con the biggest news sources with ease,” said Le.

Bungled banners in yellow
Heated protestors turned to the US Embassy in Thailand last Friday to express outrage, after ambassador Glyn Davies criticised the nation’s harsh lese majeste laws, which the ultra-royalist crowd viewed as US meddling.

Occasional New Mandala contributor Andrew MacGregor Marshall highlighted some of the funny amid the fury with his commentary on some of the protestors’ banners: Mish Khan is Associate Editor at New Mandala and an Asian studies student at the Australian National University.