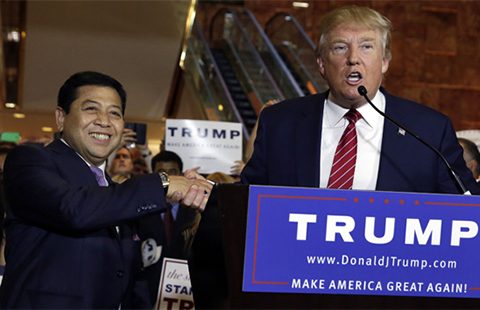 This week she runs her eye over Myanmar, the Philippines, Indonesia and Malaysia.

Colourful campaigns against camo
Doctors, lawyers and now teachers in Myanmar have donned ribbons to protest the appointment of military officers to senior positions in the health, judiciary and teaching sectors.

Teachers in Myanmar now plan to launch a “Green Ribbon” movement on World Teacher Day, 5 October, in hope that a reduced military presence in the ministry will revitalise the country’s education system. Bang bang, Bangsamoro’s dead
There is little optimism that the Philippines Congress will manage to pass the Basic Law, or BBL, on the Bangsamoro Autonomous Region before house adjourns in mid-December.

The BBL seeks to abolish the present Autonomous Region in Muslim Mindanao and create a more autonomous Bangsomoro region. Ending decades of conflict between the Moro Islamic Liberation Front and the Philippines Government hinges on the peace deal.

Critics state that this delay amid a fast approaching election campaign period, in conjunction with the BBL’s heavy dilution, render the BBL as good as dead. Earlier this month, Setya and Fadli made an unexpected appearance at New York’s Trump tower during a campaign event for the Republican Party front runner. When asked by Trump, “Do they like me in Indonesia?” Setya responded “Yes, highly.”

Their apparent endorsement of the controversial figure sparked outrage among Indonesians. The pair are now being closely investigated by an ethics committee for their appearance.

Defending his meeting with the controversial figure, Setya stated they had no interest in Trump’s intention to run and that they met as friends.

Keen to further distance themselves from any supposed political ties with the wannabe president, Fadli has handed over a Trump campaign hat and, yes you guessed it, ties, to Indonesia’s anti-graft body, the KPK. The statement was widely perceived as interference with Malaysia’s domestic politics amid heightened racial tensions between ethnic Chinese and Malays.

Two weeks ago, pro-government ethnic Malays gathered in support of Prime Minister Najib Razak, with some accusing ethnic Chinese of betraying the country’s Malay leadership in the Bersih 4.0 rallies.

The ambassador has since downplayed the incident, saying his remarks were taken out of context.

Mish Khan is a second-year law/Asian studies student at the Australian National University and associate editor at New Mandala.