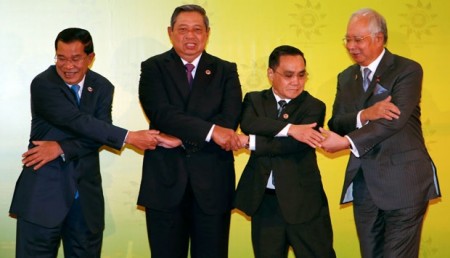 There is an interesting article on democracy in Southeast Asia over at the East Asia Forum.

Chayut Setboonsarng from the CIMB ASEAN Research Institute notes that:

ASEAN governments are not liberal democracies, nor do they claim or desire to be. Stability, an attractive investment climate and economic growth are their priorities. Expecting the ASEAN countries to become free societies may be impractical at this stage, but the current liberal momentum could usher in substantial change.

The timing of this article is interesting – as Malaysia prepares for the general elections.

(2) What should these illiberal governments do with their citizens who want greater freedom?

(3) As the citizens of these illiberal regimes become richer, would they continue to accept this trade-off (curtailed freedom in exchange for economic growth)?

(4) What about ASEAN governments who actually do desire to be more liberal such as Malaysia Mr. Najib Razak who promised to make Malaysia a world class democracy?

New Mandala readers may also be interested to know that CIMB is Malaysia’s largest bank and a key player in Southeast Asia. It is a Malaysian government linked corporation.

Its Group Managing Director/Chief Executive Officer, Nazir Razak, is the present Prime Minister’s young brother. They are both of course sons of Malaysia’s second prime minister and nephews to Malaysia’s third Prime Minister. In 2011, Nazir Razak was among the Forbes Top 40 richest people in Malaysia.

CIMB itself has a chequered history, with its evolution representing some of the worst excess in Malaysia’s financial sector (from corruption and mismanagement to forced mergers/buyout of more profitable non – Bumiputera owned banks).

All of these does beg the question, (5) What is the role of government linked corporations such as CIMB in promoting greater political freedom?