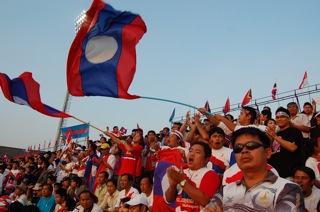 After two matches in the men’s football at the Southeast Asian Games, Laos is well positioned to advance to the semi-finals, an unprecedented achievement for the team. In its first match on Saturday, Laos drew with Myanmar after conceding the first goal while on Monday they defeated the more fancied Indonesia 2-0 in a dominant second-half performance. If they make the semis, the hosts will in large part have their home crowd to thank, for on both occasions they provided unforgettably visceral performances of their own as they willed Laos to victory (and a draw!).

Decked out in the national colours of blue, white and red and wielding masses of national flags, the local spectators packed together as one, the din of horns, drums and cheering – ‘lao su su’ (‘go Laos go’ or, more literally, ‘fight Laos fight’) – relentless and deafening. To the sight and the sound must be added the smells – the smoky twilight air of winter – and feelings of shared anticipation, joy and humour.

Besides the general revelry, a couple of scenes were especially striking in their reflection of what many might dismiss as official nationalism. First was the presence among other patriotic paraphernalia of framed portraits of Kaysone Phomvihane and Prince Souphanouvong, the men hailed in Lao historiography as leaders of the 1975 revolution. One can ponder whether these were ‘planted’ in the crowd but the cheers they provoked during and after the matches involved far too many of the crowd to have been staged.

Likewise, the cheers for deputy PM and president of the SEA Games Organising Committee, Somsavat Lengsavat, when pictures of him sitting in the VIP stand were beamed onto the giant electronic scoreboard at the Myanmar game, were spontaneous and heartfelt, at least among those sitting near me. ‘There’s Somsavat, Somsavat Lengsavat …’, enthused the man next to me, tapping on my shoulder and pointing at the scoreboard.

It is impossible to witness these events and not be struck by the fact that sporting events like these not only reflect but manifestly contribute to the resilience of the nation. What other cultural form can bring people together in such numbers with such an array of national symbols, experienced through such a range of physical senses? What other event can combine state ideology and spontaneity in such measure?

As I argued in my last post, it’s important to remember the possibility of maintaining multiple allegiances; the Lao supporters sitting next to me at the Indonesia game did not hesitate in nominating Vietnam as their team should Laos be knocked out. But rather than being some corruption of nationalism, perhaps this is another reason why sport provides such an apt expression of it, especially in Southeast Asia.

Like the crowd at the Vietnam-Thailand match, I would also caution against explaining these scenes as simply the result of people getting free tickets, following orders or fearing what will happen if they don’t. There are certainly organised cheer squads at the games and these help to create the atmosphere. But reducing crowd passion to such explanations strips supporters who are obviously passionate – whether about Laos or Vietnam – of their agency to choose a team or teams and the nation/s they represent. The people I have spoken to are obviously genuine about it.

One of many questions that remain for me is the place of the actual sport in this. Does it matter that it is sport or could something else bring people together in this way around an idea of shared destiny? I think perhaps the physicality, drama and competition of sport creates the conditions for a shared experience binding the crowd to the ideas and ideologies that are present – here (but not always) the nation. As the game ebbs and flows and the crowd responds, the crowd itself – and the nation it represents – becomes the spectacle more even than the game itself.

Another question is the relationship between the nationalist values that have dominated the football and ideas of the region that provide the formal basis of the SEA Games. Surely the games provide more than an opportunity for nationalist chest beating from each host of the biennial event. I am hoping this issue will become clearer at and after the opening ceremony on Wednesday evening.