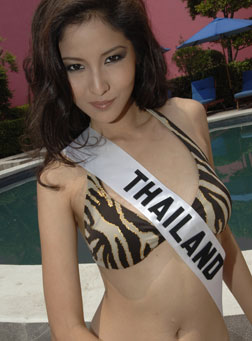 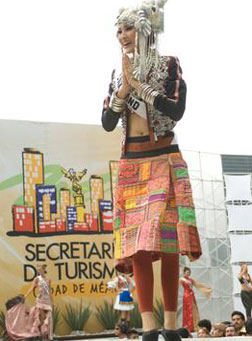 David in Siam provides this nice juxtaposition of images of Thailand’s entrant in Miss Universe, Fahroong Yutitham. The background is provided in an impassioned statement about cultural racism from the Bangkok Post’s Sanitsuda Ekachai. Here is an extract:

The exclusive quality of being Thai
SANITSUDA EKACHAI

A National Dress? This question in bold letters was placed under the picture of a Thai beauty queen who is vying for the Miss Universe crown in Mexico City. The picture, splashed on the front page of a Thai-language newspaper, shows 19-year-old Miss Thailand, Fahroong Yutitham, in a colourful, navel-displaying costume that has the ethnic Hmong look, complete with Hmong-like headgear and silver ornaments. Such a costume, the caption states, has stirred many to question whether it should be called a national Thai dress or not. The answer was quickly forthcoming from the culture police.

No, this is definitely not a Thai national dress, said Ladda Tangsupachai, director of the Cultural Surveillance Centre of the Culture Ministry. The Thai national dress, she stressed, must be Thai. It also must be in line with the official, royal designs and it must be used for proper occasions. She also criticised Ms Fahroong for failing to do her duty as Miss Thailand to show the outside world an authentic national Thai dress. Furthermore, wearing an ethnic dress but calling it Thai could confuse young Thai minds and set a bad example for the youngsters to emulate.

Don’t dismiss her answer too quickly yet, however narrow and obsolete it sounds. For hers is a prevailing mindset that refuses to budge in our society. We need to understand where it comes from, what nurtures it, and what it entails if we want to have the chance to uproot it at all. Like it or not, Ms Ladda’s views reflect the mainstream belief that the Thai identity is one and the same with the ethnic Thai. It is also linked with court culture, which entails the belief that Thai-ness is refined, sacrosanct and inviolable.

Critics blame this narrow view of Thai identity on the ethno-centric national history which deals mainly with the Thai courts, ignoring the locals’ collective memories of a rich cultural and ethnic diversity. This hegemonic history, perpetuated by all forms of popular media, has brainwashed society to believe that the country belongs to the ethnic Thai only, reducing other ethnic groups to “outsiders”. This rigid, national identity forces ethnic groups to drop their ethnic names, adopt Buddhism and learn to speak Thai without an accent in order to be accepted as “true” Thai.

Cultural protector Ladda Tangsupachai (pictured below in traditional dress) has featured in New Mandala before with the enlightened statement that “Coyote Girls have to be in the right place, like an animal has to be in the zoo.” Well my suggestion is that Ms. Ladda belongs well and truly out of any position of public influence. She is a cultural dinosaur and it’s time for her to go.