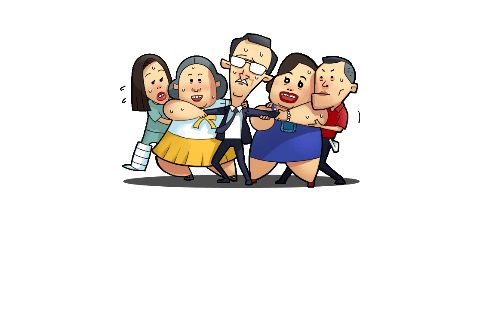 Sticking it to the crown Thai police are now investigating the Japanese company, which has since apologised for the stickers’ publication.

The set called “Silly Family” featured 41 stickers cleverly poking fun at the politically controversial clan. In Thailand, critical public discussion of the family has been banned under the nation’s notorious and harsh lese majeste laws.

The satirical set depicts Crown Prince Maha Vajiralongkorn and Princess Sirindhorn competing for their father’s attention and squabbling over the throne. It also portrays Princess Chulabhorn next to a chemistry set underneath the caption “Trust Me”, referencing her numerous and questionable honorary degrees in the field, as well as featuring the Crown Prince’s spoiled poodle Foo Foo.

In Thailand it is a crime punishable by up to 15 years imprisonment to insult the Crown. A source has sent New Mandala the following comment from the creators:

We are a group of Thais who support democracy and freedom of speech. In Thailand, reverence for the royal family has sometimes been exploited to silence political debate. We wanted to create some light-hearted stickers that show the Thai royals as just like any other family. In progressive countries, people can make jokes about their leaders. The furious reaction of Thai police shows Thailand is still far from democracy and freedom of speech.

Readers feel free to comment with any other specific references caught from the package, featured below (click on the image for a larger version or download a copy of the stickers here).