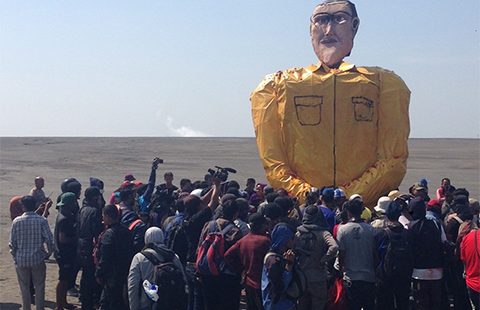 Stuck in the mud in the shadow of Bakrie The effigy of Bakrie at the protest marking nine years since the Lapindo mudflow disaster. Photo by Phillip Drake.

The ninth anniversary of the Lapindo mudflow eruption shows Indonesia needs to urgently change its thinking on disaster management.

On 29 May protesters gathered in Sidoarjo, East Java, to commemorate the ninth anniversary of the Lapindo eruption; the world’s largest mudflow, and which is attributed by some to natural gas drilling.

At the protest, local victims and human rights activists paraded a giant effigy of prominent Indonesian politician and businessman Aburizal Bakrie. The oversized oligarch wound through the streets towards its final destination atop a section of the levees containing the mud, which continues to flow today. As it moved up the levee, the effigy began to collapse on itself and its carriers.

As the procession stalled for several minutes, it was hard not to view the moment symbolically: the weight of Bakrie’s power and influence overwhelming ordinary people. While this interpretation is perhaps apt, Bakrie is not the source of all the trouble in Sidoarjo.

The history of the Lapindo case is well known. Nine years ago, a geyser of hot mud suddenly burst from the ground next to a gas exploration well owned by Lapindo Brantas, a subsidiary of the Bakrie Group, a conglomerate controlled by the Bakrie family. The mud accelerated in the months that followed, eventually displacing over 40,000 residents, killing dozens, and causing numerous cases of illness, and extensive environmental, economic, and infrastructural destruction.

As head of the Bakrie family and a prominent, and controversial, political and economic figure in Indonesia, many observers suspect that Bakrie’s influence is behind many of the controversies related to this disaster. Most famous is the dispute over what triggered the mudflow, drilling by Lapindo Brantas or the Yogyakarta earthquake that occurred two days before the eruption, over 200 kilometers away.

Scientists with connections to Lapindo Brantas uniformly blame the earthquake, while independent scientists tend to point to the drilling. Other Bakrie-related controversies include media manipulation, a contentious land-purchase program meant to function as a compensation scheme, the program’s underfundung, and attempts to sell and dismantle Lapindo Brantas to protect investors.

Despite widespread concern over Bakrie’s influence, I think it is more important to focus on questions of disaster governance. Of course, Bakrie’s role should not be ignored, but his spectacular figure tends to distract from considerable mistakes in the national government’s handling of the mudflow.

In 2007, then President Susilo Bambang Yudhoyono (SBY) issued a decree that established the BPLS (the Sidoarjo Mudflow Agency) to oversee disaster management operations, from handling the mudflow to providing aid to victims, with funding support from Lapindo Brantas. This two-headed disaster management apparatus suffered from bureaucratic inefficiencies that slowed the implementation of response projects, caused confusion between different governing bodies, facilitated corruption, and led to the dissemination of misinformation, all of which alienated victims.

Subsequent revisions to the decree eventually phased out Lapindo Brantas’s financing role, except for requiring that the company satisfy its debt to victims: the remaining payments from the land-purchase program that were supposed to be delivered in 2008.

To this day, the national government continues to oversee disaster management projects in Sidoarjo via the BPLS, but the conceptualisation and execution of its policies have shown little evolution since 2008. Thus, while the BPLS has been fairly successful in handling the physical mudflow (maintaining the levees and pumping excess mud into nearby waterways) and regional infrastructure (developing new roads and buildings), it has done little to address environmental concerns (like pollution to air, land, and water systems) and rifts with victims (even adopting Lapindo Brantas’s land purchase program to administer aid as the expanding mudflow has displaced additional victims). A plea to the President: “Pak Jo, help us get out lives back.” Photo by Phillip Drake.

In recent months, much of the news related to the mudflow has focused on President Joko Widodo’s plan to use federal funds to cover Lapindo Brantas’s debt to victims. While payments are expected to begin rolling out on 26 June, and should be completed before Idul Fitri (Indonesia’s festival marking the end of Ramadan taking place in mid-July this year), the nine-year anniversary is an opportune time to rethink the entire disaster management apparatus in Sidoarjo.

Experts estimate that the mud will continue to flow for years to come. Rather than repeating mistakes that not only continue to alienate ordinary residents in the surrounding neighborhoods and ignore the environmental effects of the mud, but also have proven to be financially inefficient, it is time to integrate lessons from the past and develop a new disaster management strategy in Sidoarjo.

In disaster studies, it is well known that top-down, centralised disaster management strategies tend to be inefficient at best. When victims are excluded from the planning and administration of disaster management policy, when they are not provided with clear information about the causes and effects of a disaster, when they are not informed of their legal rights, and when there are no clear lines of accountability through which victims may act on these rights, a disaster management institution can actually intensify victims’ hardship and vulnerability to hazards. Beyond occurring in Sidoarjo, similar problems with top-down, technocrat-led disaster governance have occurred in New Orleans and Haiti, to name some infamous examples.

By opening up disaster management operations to be inclusive of local residents, whether through civil society groups or via local governing institutions, to freely share both “technical” and “informal” information, to establish clear roles and responsibilities and a means of evaluating performance, and to move beyond the spectacle of Bakrie and media stunts by victims, all sides should benefit. On the outskirts of Indonesia’s city of mud. Photo by GokuPhoto on flickr https://www.flickr.com/photos/putu/

“Lapindo says it has spent 2.7 trillion [rupiah] to help victims,” a displaced resident explained between photographing the effigy, “but no one saw where it went.” This man, who now lives in central Sidoarjo, said he brought his wife and daughter to the anniversary protest to remember their lives before the disaster.

But after nine years, as a new generation of children grow up in the region with no memories of life before the mudflow, many current and former residents fear that nothing will change, regardless of the government’s planned delivery of land-purchase payments.

Atop the levee, an activist with JATAM (the Mining Advocacy Network), which organised the parade, explained that the event is crucial for countering the sense of hopelessness that frequently arises. Beyond the parade, victims read poetry, fell into trances, danced, and sang, all for the sake of demanding justice.

Given these feelings and the ongoing problems with disaster management in Sidoarjo, there is no reason to proceed along the current course, unless the weight of Bakrie or other figures masked in his shadow are truly as great as the symbol of the collapsing effigy would suggest.

Then again, after a few minutes, which included some minor adjustments and the addition of many new hands, the effigy was on the move again, eventually finding its place on the wall. Perhaps this is a sign that Bakrie’s influence can be overcome.

Regardless of my divergent readings of the effigy’s symbolism, there is now an opportunity to focus on capacity building, and on empowering local communities both in Sidoarjo and those vulnerable to social and environmental disasters elsewhere. History teaches that empowerment and capacity building is always cheaper and more effective than response and reconstruction projects.

In a region famous for its political and environmental turbulence, it would be wise for Indonesia’s government to apply these lessons as various other social and natural hazards loom.

Phillip Drake is an Assistant Professor of English at the University of Kansas. His research and teaching focuses on environmental literature, political ecology, and disaster studies.