Student Politics in the Selfie-Age As an evening breeze sweeps across campus, I’m chatting to a group of students from Universitas Gadjah Mada (UGM), in Yogyakarta’s north, glasses clinking with es teh and es cendol. Kretek cigarettes crackle into the air as the student radio station hums in the background. We’re just blocks away from the main gates of UGM, the red-roofed Graha Sabha building sitting heavy like a prop at the back of a stage, Merapi in shadow in the distance.

This could be any warung across Indonesia right now: students drinking tea, talking politics, hedging bets about their next president. And yet history hovers in the streets of this university, once such a hot bed of political activism throughout the New Order, as student demonstrators streamed down the boulevard in 1998 calling for Suharto’s resignation. As Suharto’s face adorns the t-shirts, stickers and pins now worn by many UGM students around Yogya, I wonder what their thoughts are for the upcoming election, and whether we’re seeing a conservative shift in student politics.

“I think Jokowi’s got a good campaign, and he’s everywhere in the media, but that doesn’t mean he’s a good candidate,” says Hilda, 20, from the Agricultural Sciences Faculty. “I think he’s breaking his promise to Jakarta by not seeing out his term as governor, and that’s not a good way to start as president.”

“I don’t think he has enough experience yet,” adds Diar, 20, a Medicine student. “We don’t know his track record and I worry that he just does whatever Ibu Mega tells him to. He’s not firm enough in his decisions yet- we need someone who takes a stand.”

Arief, 19, at a nearby table joins in: “Sure, he’s on Twitter, he’s on Facebook, and he goes to the kampung, he hangs out with the people – but what I’m wondering is, is that just what he’s been told to do? You know, has he just been shaped by PDI to do that so it looks good, so that it makes him look like a ‘man of the people’?” 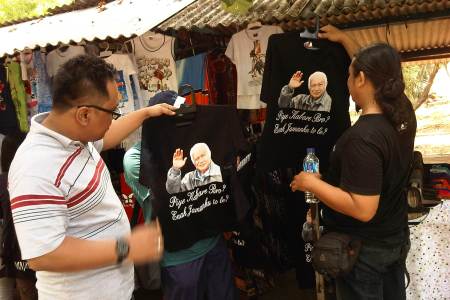 “How are you? It was better in my time wasn’t it?” In Yogya, shops and kiosks do a brisk trade in shirts and buttons evoking nostalgia for the Suharto era.
Photo credit: Hendry Ginting

In the week that saw Jokowi announce Jusuf Kalla as his running mate, and Prabowo step up his media campaign around town as the ‘Asian Tiger’, the students are quick to compare the two candidates.

“Prabowo is definitely more experienced,” says Business student Intan, 19. “He’s not being told what to do by anyone – he doesn’t need a fancy media campaign because he has more substance to him.”

“He has a better track record in politics, and because he’s from the military it means he can make firm decisions,” adds Bowo, 18, from UGM’s Vocational School.

The students don’t seem too perturbed by Prabowo’s track record on human rights.

“Prabowo has all those allegations against him because he’s been in politics for so long, and that’s part of it. It’s part of being in government,” adds Hilda.

“I think it’s just part of being in the military and you have to accept that things happen. He was a general – he had to make some tough decisions,” says Arief.

The students’ comments seem to echo the calls from Camp Prabowo, arguing the need for a more ‘tegas’ (‘firm’) president this year. Yet, when asked about whether Prabowo would actually make a better president than Jokowi, they’re a little more ambivalent.

“Well, I guess- but how can we be sure? I don’t think it really matters who we choose. Prabowo might have more substance, but at the end of the day, I don’t really see either candidate changing things for us,” says Hilda.

“That’s true – education prices continue to rise and no matter who you vote for, nothing really seems to change,” says Ario.

“It doesn’t matter who you choose – once they get in, they become corrupt,” says Intan. “You start by paying off your campaign debt, and then it’s just an ongoing transaction – you can see how the ‘wrong’ kind of money could get exchanged along the way,” says Intan.

“No way!” they scream unanimously.

“Corruption is inevitable,” says Diar. “You can’t avoid it.”

“It’s just absolutely not possible,” says Intan. “Because it’s so ingrained. We learn it at school, at university, on the streets. A small coin, a note, given to the police at the traffic lights. Rich students getting into degrees here because they can pay. People paying their way out of jail. So it’s the same in government, just on a much, much bigger scale. Jokowi will become just the same.’

Sobering comments from the under 35s whom I had thought would be among Jokowi’s key supporters. These first-time voters, representing 80% of Indonesia’s Twitter and Facebook users, have access to a wide range of information outside the mainstream Metro, TV One, and MNC channels. They’d easily sit within the growing middle class driving up Indonesia’s GDP: educated, well off, able to access different ideas online and challenge their parents’ view of the past. But is it simply, as The Jakarta Post suggested some time ago, that these young voters, not knowing life under the New Order, just don’t care? Or does it reflect a deeper conservatism among Indonesian student politics?

Former UGM Law student, and head of the National Youth Secretariat for Jokowi in Jakarta, Cahyo Nugroho, views these comments as symptomatic of a sweeping conservatism across the university sector.

“I think one of the biggest factors in all this has been the privatisation of universities – not just UGM, but everywhere in Indonesia,” says Cahyo. “Students now pay more but are expected to complete their degrees in less time, and I think this has a real impact on the time they have to engage in politics or other extra-curricular activities.”

I ask Cahyo whether he thinks the students’ comments represent a ‘generational’ shift in politics, whether students now could be considered more conservative simply by comparison to the previous generation of New Order activists.

“When you compare student activism now with back in the New Order, the most obvious difference to me is a lack of repression, and therefore a lack of ‘reactive’ politics. We had no choice back then: we couldn’t gather on campus, we couldn’t demonstrate, we had no say in politics, our activism had to be reactive.

“Perhaps people don’t feel ‘repressed’ now. You can talk about privatisation, you can talk about fee increases, you can have those discussions on campus, so politics is less reactive now. A crucial point is that there seems to be no regeneration among student activists today, no mentoring from past activists. And so as a result, universities become fertile ground for parties like PKS and other conservative Islamic groups to sow their ideas and encourage a compliant, conservative student body.”

I put these ideas to a group of students from the Political and Social Sciences Faculty (FISIPOL) the next day. During the 1990s, when student activism flourished, UGM students–FISIPOL students among them–were some of the most active across the country. Their strength came from the underground networks they built across campuses but also across sectors, linking up with underground farmers’ and workers’ networks. I ask the group whether they feel these comments on UGM’s rising conservatism hold true.

“I think you can put it down to a rising apathy more than anything else,” says Rena, 20, from the School of Politics and Government. “It’s like students just don’t care about what’s happening around them or about the future of our country. And the biggest factor affecting that? Technology.”

I ask Rena to elaborate.

“Well maybe back in ’98 they sat and had discussions about politics, actually talked about how to change things. Now, we finish classes and we’re sitting at the canteen, like this, but everyone’s on their phone, everyone’s updating their status, uploading selfies. People have become so inward-looking it’s like they’ve forgotten the bigger picture.”

“I think people are becoming victims of mainstream media,” adds Rena’s friend, Eni, 20, also from the School of Politics and Government . “When I hear the comments of those other students, I feel like they’re parroting what’s coming straight out of MNC, and TV One. They’re just nodding their heads and saying, ‘Yeah, yeah, I agree.’ They’re not thinking critically.”

I ask this group of students how important an issue corruption is for the upcoming election.

“It should be number one!” Sociology student, Vida, 19, shouts. “There are plenty of politicians, or candidates, who want to fight for this, and to fight for the KPK. I think both candidates need to do more to emphasise the importance of the KPK. Corruption hurts everyone.”

“I wouldn’t rank it above Health and Education as issues,” says Eni, “but I do think it’s important to be firm on this. To be ‘tegas’, she says, poking fun at the overused word. “I think it’s important that we interrogate this notion of ‘tegas’- what does it mean, exactly? Is it just about being militaristic? Or does it mean having the courage to actually lead a democracy? Leading the people is not the same as leading an army.”