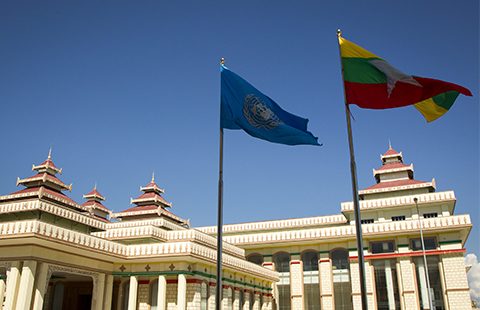 The NLD and NPT This column was published in The Myanmar Times on Monday, 18 January 2016

Month by month, Naypyitaw has become the accepted centre of politics and policy, one where the ordinary business of government is transacted without fanfare. This means the National League for Democracy will be taking charge of a capital quite different than the one that greeted their predecessors in early 2011.

While there are still big holes in official capacity, the fact is that most of the ministries, the Union Assembly and other Naypyitaw-based government agencies are more able than ever to support a democratic regime. That official capacity – from the lowliest clerk to the most distinguished permanent secretary – should make life easier for the NLD’s newbie administration.

At the same time, for eager party apparatchiks fresh from the campaign trail, Naypyitaw will initially be a jarring experience. Few will be mentally prepared for the monotony of legislative life or the discipline imposed by their party’s central executive committee.

Even though the NLD prides itself on a democratic spirit, it will maintain strict control over its people. It makes sense to keep certain strategic manoeuvres secret from potential opponents. Even some of the tactical details of the NLD’s first months in office are likely best kept to themselves. Yet there has long been an authoritarian tendency in the party. It is a mistake to consider it a liberal vehicle for liberal ideas.

With the party’s senior members calling the shots, rookie legislators will find that most days require a great deal of waiting, watching, sitting and listening. The solemn pace of political action will frustrate those who have binged on The West Wing or, even better, House of Cards.

Eventually, it will be the pressure to deliver results for the people that will test the NLD novices. In this early phase of political re-arrangement they know there is a mountain of work to be done. Of course the new legislators in Naypyitaw will also want to build their reputations. Some will eventually go on to become famous figures, even household names.

It is tempting to want to put the cart before the proverbial horse.

Daw Aung San Suu Kyi herself – in an acknowledgement of this problem – has already issued a rebuke to those angling for senior positions. She counselled that ministerial slots will be awarded on merit and that people should not waste time presenting their bonafides.

I do not doubt that some will already be planning for decades of NLD rule. For now there is not much competition from ethnic parties, disadvantaged in the first-past-the-post electoral system. And the Union Solidarity and Development Party’s initiatives to craft an electable platform are in their infancy. It could be a long time before anybody else gets close to the NLD’s ballot box success.

This is where the turbulent situation across the border in Thailand is worth looking at closely. When the Thai Rak Thai Party of deposed former Prime Minister Thaksin Shinawatra was riding high, the telecommunications-tycoon-turned-political-entrepreneur talked about ruling for a generation. The electorate was comfortable with that suggestion, delivering bumper majorities at every opportunity.

Yet Thailand’s royalist and military elites grew increasingly concerned by the notion of Thaksinite dominance. They tried on a number of occasions to reboot democratic practice and each time the people voted for the Shinawatra clan.

Thailand’s most recent coup, in May 2014, returned the country to a familiar pattern of entrenched military rule. The Myanmar people need no tutorial in what that looks like. Sadly, Thailand’s General Prayuth Chan-ocha and his subordinates show no signs of looking to surrender power. By comparison, Myanmar is now a beacon of democratic potential.

What Thaksin failed to adequately reconcile was the distance between his own resounding popular mandate and the countervailing perspectives of the armed forces and their palace patrons.

Even with last year’s booming electoral endorsement for the NLD, Myanmar still faces the risk of similarly unstable medium-term outcomes. These situations are more likely if the NLD mismanages its relationship with current Tatmadaw commanders, or with the cronies, or with the growing cohort of retired generals who seek to remain politically active.

These groups are powerful, motivated and well-resourced. In ideal circumstances, some of their influence should diminish in the years ahead. But that will be difficult to encourage unless the NLD legislators readying themselves for life in Naypyitaw take the time to fully understand the system they want to dismantle.

I continue to be surprised by the naivety of hardened pro-democracy warriors who rarely make the effort to appreciate the subtleties of the system they long opposed. Thankfully, as the NLD will learn, there is no better place to understand Myanmar’s old powers than in the belly of the beast: Naypyitaw.

Nicholas Farrelly leads an Australian Research Council Project focused on the political cultures of Naypyitaw. He is also the director of the Myanmar Research Center at Australian National University, and co-founder of New Mandala.