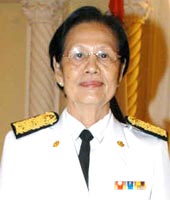 Minister for Culture in the Surayud regime, Khunying Khaisri Sriarun, is leading the charge against inappropriate coyote dancing. Khunying Khaisri has impeccable cultural and royal connections. She is reported as being the former President of Silpakorn University, serves as secretary of the Princess Maha Chakri Sirindhorn Foundation (and sits on the committee of the Princess Maha Chakri Sirindhorn Anthropology Centre) and she is President of Naresuan University and Silpakorn University Councils. She is co-author of a book on the art of Sukhotai. She has responded promptly to the challenges of post-coup cultural renovation. Thai Rat reports on a ban on coyote dancing for girls under 20. Here is a summary of the article:

The ban was a response to Her Majesty the Queen’s concern over a popular racy dance by “Coyote Girls” as seen in the news of the celebration of the end of Buddhist Lent in Phonphisai, Nong Khai Province, bordering Laos, where people came to celebrate the Naga fireballs from the Mekong River. Very close to the temple grounds, a local motorcycle shop hired coyote girls to promote its wares. The practice seems inappropriate for this location. Different authorities involved (culture, religious, education, social development, family, women and children) have responded in different ways to reinforce the rules and regulations to prevent this practice. There is a need to protect young girls under 20; to protect the good image of the country; and to prevent crime provoked by sexy dancing.

Short-term and long-term measures have been launched to deal with the matter. The local administration and police were ordered to prevent the shows in public places. The Culture and the Education Ministries will enact a Ministerial regulation banning students aged below 20 from working as “Coyote Girls” or “Pretty Girls”. For the long-term solution, the Ministry of Culture will hold meetings and workshops with parents, academics, young people and entrepreneurs, to focus on what are the appropriate behaviors in society. These will lead to the solution in a sustainable manner. The scheme will be promoted as a national agenda. (Thanks to Ai Man for the summary.)

The Nation reports an “informed source” as saying that “as a solution, part-time jobs will be made available for students during their school holidays.” But in another Nation report there are already signs of cracks emerging in the campaign:

Education Minister Wijit Srisa-an said Tuesday that he disagreed with the plan by the Culture Ministry to ban girls under 20 years old to make living from dancing. Wijit said the ban should have nothing to do with age but should instead focus on manner of the shows in public places. “I think the issue is getting weird. The ban should focus on improper behaviours in public places instead,” Wijit said.