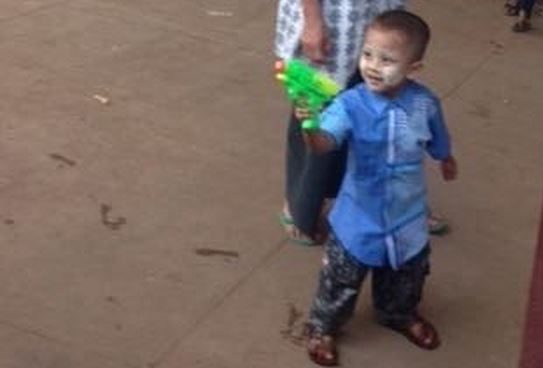 With Myanmar now readily open to the world of travellers, intriguing local customs and experiences are on offer for those with a sense of adventure. For citizens from over one hundred countries it is now incredibly easy to visit Myanmar with the new e-visa. Numerous budget airlines fly into Myanmar from Kuala Lumpur, Singapore and Bangkok, and hostels and budget-style hotels are springing up everywhere.

Myanmar is still on ‘the road less travelled’ and numerous traditions and customs will confuse, intrigue and excite those daring enough to visit the mysterious and enchanting country. One of the yearly traditions that will also involve all those who venture into the country in mid April, is that of Thingyan. Similar to Songkran in Thailand, the so-called ‘Water-Festival’ celebrates the Burmese New Year holiday. A religious festival, Thingyan has its origins in Buddhist mythology, and symbolises the washing of ones sins. Although there are important religious rituals that accompany Thingyan, to the youth in particular, it is an enormous street party that literally takes over cities and towns. 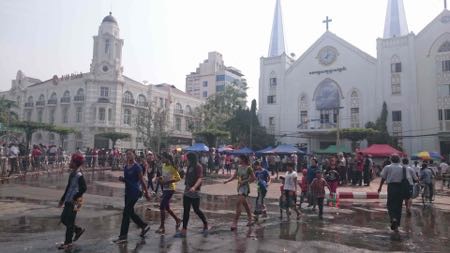 At approximately 7am children, youth and willing adults set up buckets, hoses, tables, water pistols, and anything that can be used to wet those that dare walk or drive pass the incredibly enthusiastic participants. The day long water fight begins. In Downtown Yangon stages are set up for water themed rock concerts and large tucks are positioned in strategic locations with large fixed hoses placed on top in order to soak the crowd. Usually the rock concert commences at 8am with the crowd already fully wet. 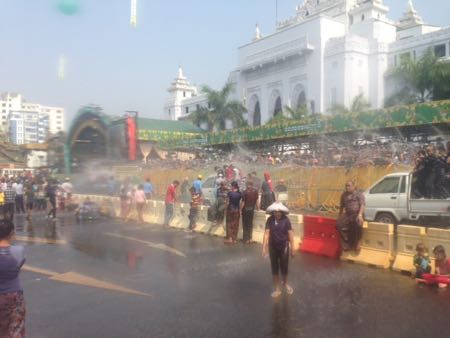 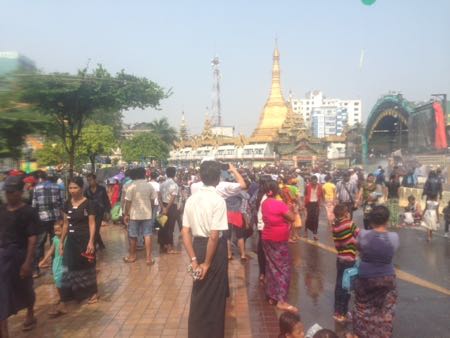 In front of the stage there is room for trucks and cars to slowly drive through to get a close up look of the performer and to get soaking wet. There is a line over one mile long with trucks, vans, and cars dangerously full with dozens of hyped-up youth jumping and singing either on the roof or in the back of the truck. They all want to get wet, thus the crowd, using numerous methods, drenches them with water and the large hoses stationed atop large trucks fires water all over them. The cheering is loud, the music is louder. It is now 9am.

Beer is breakfast during Thingyan. Kids, teenagers and adults are all downing copious amounts of Myanmar branded beer. Offal seems to be the party delicacy, with literally every part of the pig on display or boiling in a large broth. There is a religious need to binge drink in order to facilitate additional fun. As the day goes on, it is obvious the beer takes hold and basically the whole city falls into a giant drunken party. If you don’t want to get wet, you stay indoors. Throughout the day small children run after tourists with small buckets of water, taking amusement and delight in soaking them. The laughter is deafening, and their smiles are a mile wide. Vans and trucks circle the city full of drunk party-goers who never lose interest nor excitement in getting wet. The city is out of control and the normally conservative society is off its chain.

A small child, no more than 3 years old, with dyed red hair and a smile so large it instantly melts your heart, chases me down the street holding a small water pistol. When he reaches me he lets the pistol off, soaks my shirt whilst producing a uniquely genuine and enthusiastic laugh. Similar things happen, constantly, all day. There is no safe nor dry place during Thingyan. Whilst on the train from Yangon to the Kyaikto Pagoda, with the old colonial train going no more than forty kilometres an hour, children and adults alike use hoses, water pistols and buckets to wet all those onboard. Businessmen roll their eyes, other passengers scream, however it is taken well and with a sense of excitement. From the window of the train one can see numerous dance parties, all conducted under large makeshift hoses, with alcohol flowing and hardcore dancing to tunes from American RnB stars.

If there is one thing about Thingyan that will stay with you forever, it is the laughter and enthusiasm the children have for drenching people, and the satisfaction they get from completely soaking a random person. There is nothing quite like Thingyan and one needs to experience it in order to fully understand what is going on. All day I constantly ponder ‘what on earth is going on’ and take delight in how much enjoyment water can bring. It is chaotic, intriguing, exciting, and unrelenting. To a first time visitor, perhaps overwhelming, but I can guarantee it is an experience you will never forget.

Mat Carney is a Research Fellow at Chiang Mai University.