From the Sydney Burma Network: 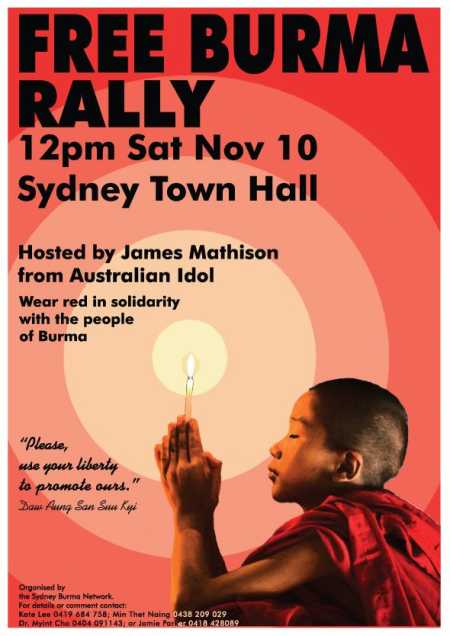 The recent crack down on peaceful protests in Burma has a personal resonance for Australian Idol host James Mathison. “The violence used against monks and peaceful demonstrators was terrible. It made me become involved in the Burma campaign. Things have to change,” James said yesterday. “My grandmothers’ family were in Burma in 1962 when the Government was overthrown by the military. There was widespread panic and they fled the country with nothing. They had to leave everything behind. Sadly, 45 years later the military is still in power in power and things have gone from bad to worse.” James believes it is time for action. “The violence used against peaceful monks and demonstrators in September highlights the ongoing human tragedy on our doorstep. Thousands were detained and dozens, maybe hundreds, killed. I think its time for change in Burma so that people can live without fear and go about their day to day lives in freedom as we do in Australia.” “I believe that its important for me to be involved in this cause and for all Australians to take a stand for the people in Burma who don’t have the luxury of being able to speak freely in their own country. I hope that being involved in some small way will help lead to change that is sorely needed in Burma.” James Mathison will host the Free Burma Rally on 10 November at Sydney Town Hall. The rally, organised by the Sydney Burma Network, will demand an end to an Australian aid project where Australian Federal Police are training Burmese police who violently suppressed the peaceful demonstrations. The rally will also highlight the plight of over 2,000 political prisoners in Burma.