Despite the oppressive heat, thousands of Gerindra supporters gathered at Gelora Bung Karno Stadium at Senayan, Jakarta in late March. They were waiting for their party leader and presidential candidate, Prabowo Subianto. He arrived on a helicopter, and began to inspect Gerindra’s paramilitary forces while riding from his two billion rupiah horse, wearing keris on his waist. What is the significance of riding a horse and wearing a keris? 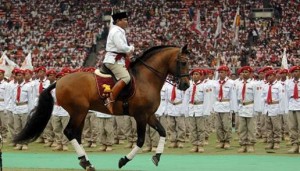 Symbols have often been used during the 2014 electoral campaign. Political parties and their presidential candidates try to embrace voters through various ways of symbolic communication. Prabowo wanted create an image that he is a truly Javanese warrior. Based on tradition, there are certain conditions to be fulfilled to be a Javanese warrior, such as a house, woman, horse, bird, and keris. Each of these symbols has a particular meaning. A horse is a symbol for vehicle that can bring a man anywhere. It represents improvement and progressiveness. A Keris is a traditional Javanese weapon. It is a symbol of preparedness, alertness, and a man’s ability to protect. 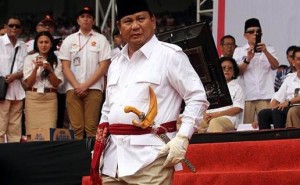 There are several reasons why Prabowo wants to create a Javanese warrior image. First, voters with Javanese ethnic background are the majority in Indonesia. Javanese voters are not only limited to the island itself, but are also spread out to other regions of Indonesia. Second, Prabowo must compete with his toughest rival, Joko Widodo. And ‘Jokowi’ is already popular as a person who has a strong connection with Javanese culture.

In order to compete with this lower priyayi from Solo, Prabowo must demonstrate his Javanese nobility. Prabowo wants to be seen as an official descendant of Javanese aristocrats. Prabowo’s father, Sumitro Djoyohadikusumo, was a high Javanese aristocrat. He has kinship lineage with one of Diponegoro’s commanders and the Mataram Kingdom.

Jokowi is also clever in terms of using the political symbols. He declared the presidential candidacy at Si Pitung’s house in Marunda, North Jakarta in mid-March. When asked why Jokowi chose Si Pitung’s house, he just said because this house is a ‘symbol of resistance’. 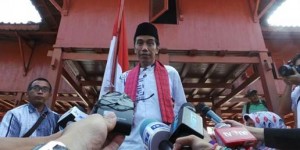 The story of Si Pitung is similar with Robin Hood from England. Si Pitung was legendary hero from Betawi who lived in the colonial period. His resistance to the colonial regime become one of the most popular folk stories in Jakarta. With his fellows, Si Pitung robbed greedy landlords and Dutch colonial officers and then distributed to the poor people. Si Pitung was notorious criminal for the Dutch but he was respected hero for the local people. The story of ‘Si Pitung’ was brought to cinema in the 1970’s and has been broadcast on the television. Therefore, it is not surprising if the story of Si Pitung remains popular, especially for Betawi people.

The message is: if Si Pitung resisted colonial repression, Jokowi will defend the people’s rights for social justice in the market liberal age. Furthermore, Jokowi wants the public to see him as a leader that emerged from ordinary people. Si Pitung is a symbol of common people – he did not come from aristocrats. Jokowi is also eager to create an image that he does not belong to one group exclusively. Even though he is a Javanese, Jokowi respect history and culture of other ethnic groups. Furthermore, given that he would no longer be governor of Jakarta if elected as President, Jokowi wants to send appreciation and gratitude for Betawi people’s support during his government.

Political symbols have been used in previous decades in Indonesian history. Javanese ‘indirect’ speech is influenced by Javanese feudalism, and uses metaphors as a way to express a point of view. The text that be expressed has ambiguous meaning. It can come in the form of satire, sarcasm, and “reminder” messages.

The use of symbols and metaphors in Indonesian politics is a common practice. Prabowo and Jokowi are contemporary examples. They hope that Indonesian people vote for them because of the symbols they use. However, are these symbols effective to gather the vote? The Presidential election result is the final answer. But keep a look out for other Javanese symbols during the Presidential campaign. They will be subtle, but can be highly effective.

Yogi Setya Permana is a Masters student at the College of Asia & the Pacific at The Australia National University.