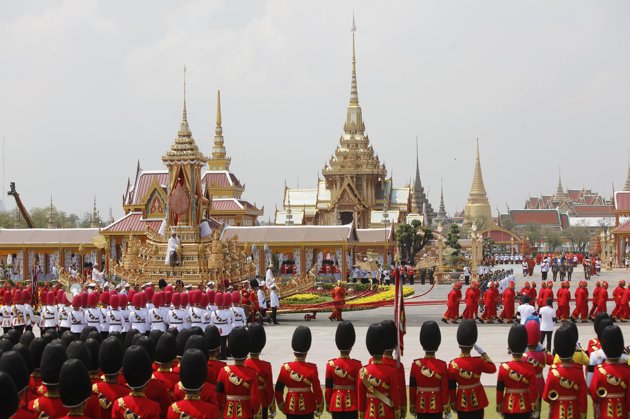 An upcoming talk at the Siam Society will be of interest to many New Mandala readers. Thanks to a very long-time contributor for drawing it to my attention.

The details on the talk are:

It is universally known that the Thai people believe that their sovereign king is a god-incarnate – the avatar of Lord Vishnu on earth to protect and look after the welfare of his people. Members of the Royal Family are also earthly manifestations of angelic beings from heavenly realms. When they come to end their earthly sojourns, their souls return to heaven leaving the physical remains on earth. It then becomes the duty of the Thai people to mount a royal ceremony to cremate the royal remains with the proper procedure as prescribed by the ancient royal tradition.

This lecture lays out the traditional beliefs that had been accumulated through time and had formed the basis of the Thai belief system: animism, ancestral worship, Brahminism, Hinduism and Buddhism. The Buddhist Cosmology as described in detail in “Traibhumikatha : the Three Planes of Existence” is introduced as the source for all artistic creation and expression pertaining to the Ceremony. There will be a historical account of the Royal Cremation Ceremonies from the Ayudhya Period to the present. The lecture will be illustrated with explanatory charts and photographs that date back to the time that photography was introduced into Siam.

M.R. Chakrarot Chitrabongs is a Distinguished Scholar of Chulalongkorn University, The Former President of the Siam Society and the Former Permanent Secretary of the Ministry of Culture. A grandson of Prince Naris and Prince Damrong, he has been a lifelong advocate of classical Thai culture. His publications on Thai culture and other issues include Selected Articles by M.R.Chakrarot Chitrabongs (2004) and Approaching the Last Quarter of My Life (2004). He has also been an active patron of Thai arts, leading tours of classical Thai musicians, dancers and puppeteers to countries around the world. An architect by training, he has been an influential figure in Thai architecture. Now retired from public service, M.R. Chakrarot continues to be actively engaged in Thai cultural promotion and recently received a decoration from the French government in recognition of his work.

The Siam Society is deeply grateful to the James H.W. Thompson Foundation for its generous support of the 2011 – 2012 Lecture Series

The above image is from this website — it has a large number of other outstanding photographs of the April 2012 cremation ceremony of Princess Bejaratana Rajasuda Sirisobhabannavadi.