Tear-gas grenades in Bangkok on 7 October 2008 Today is the first anniversary of one of the more important days in recent Thai political history: 7 October 2008.

Soon after the bloody clashes of that day, a photographic chronicle of events was produced by regular New Mandala contributor Nick Nostitz. It provides a graphic overview of the injuries that resulted when the People’s Alliance for Democracy protesters confronted a Border Patrol Police (BPP) and Metropolitan Police effort to disperse them. One of the key issues emerging from those protests centers on the use, or misuse, of CS tear-gas grenades.

Here we hope to summarise the role of tear gas in the events of 7 October 2008.

Trawling the source material it appears that six types of CS tear-gas grenades were used by BPP and Metropolitan Police officers in Bangkok on 7 October 2008. Most (about 70 per cent) were fired by Chinese Norinco [North Industries Corporation] 38-mm tear-gas guns, which are 818 mm long, have an effective range of 130-140 metres, and discharge tear-gas canisters at a velocity of about 60 metres a second. According to eye-witnesses, and this video footage, some grenades were fired by M-79s and others were hand-thrown. Four types were manufactured in China, including both gun-fired tear-gas canisters and hand-thrown grenades; the other types were made in the United States and Spain. The BPP were issued only with the Chinese types, while the Metropolitan Police used the US grenades.

The Chinese types use a small amount of RDX explosive to burst the gas container open and hence disperse the gas faster, more uniformly and across a larger area than most other grenades. They are also cheaper. However, the RDX can also make them lethal, especially when they are fired into crowds at short distances. Most of the casualties on 7 October were caused by the 38-mm aluminium canister-type, which had been ordered from China in 1993 and delivered in 1995. They are a variant of Norinco’s NF-02 ‘explosive projectile’, which has a length of 125 mm, carries 40 grams of CS agent, and has five grams of RDX explosive.

Pornthip Rojanasunand, director of the Central Institute of Forensic Science, said on 13 October, after viewing tests of each of the grenade types, that the canisters should be ‘considered weapons, not crowd control devices’. Pornthip also said that ‘the police and military generally use American [rather than Chinese tear-gas], but it’s expensive – much more expensive. But comparatively, the American [tear-gas] is safer’. The BPP had no training whatsoever with the Chinese grenades. Most had probably never fired or even handled the Norinco 38-mm guns and NF-02 rounds before 7 October. Yet the NF-02 canister is clearly marked with a warning, in English, that it is to be used only by ‘qualified personnel trained in riot control tactics’. It also says: ‘Do not fire directly at persons as serious injury or death could occur’. The Norinco specifications for the NF-02 state that it has a shelf-life of five years from the date of manufacture, and that it should not to be used if it has been ‘stored longer than eight years from the date of manufacture’ – i.e., after 2001. The NF-02s used in Bangkok were 15 years old.

On 14 October, the commander of the Royal Thai Police Ordnance Division, Police Major General Phuwadol Wuttaganok, said that approximately 2,000 Chinese-made tear-gas grenades had been recalled from the BPP and the Bangkok Metropolitan Police the day after the fatal crackdown on the protesters; they were being stored at the Ordnance Division, and he expected that the ‘entire supply’ would probably be destroyed. Moreover, he said that police units had been ordered not to use US tear-gas grenades because they had also been found ‘to be deadly’. He also said that the police in charge of dispersing the protesters were unaware of the explosive impact of the Chinese canisters, and that: ‘I guess they just thought all tear-gas canisters were the same. They were told to fire — and they simply fired’.

Since the events of October 2008 the government of Somchai Wongsawat has fallen and the Democrat-led government of Prime Minist Abhisit Vejjajiva has come to power. What, then, is the legacy of 7 October? Since that fateful day Thailand has seen other efforts to disperse protesters. Most have involved violence but tear gas has not been a key part of the weaponry used. The East Asia Summit in April 2009 was abandoned, ultimately, because the Red Shirt protesters could not be controlled. Days later, the Thai Army displayed its preferred method for clearing protests in Bangkok, as it moved across the city. The BPP and Metropolitan Police have continued to be involved in policing subsequent protests, although they have not been called upon to fire tear gas in the same way again.

In September 2009 there were reports that Thailand’s National Human Rights Commission will file charges against former Prime Minister Somchai Wongsawat, former Deputy Prime Minister Chavalit Yongchaiyudh and former National Police Chief General Patcharawat Wongsuwan. With legal proceedings on the horizon this episode of Thai political drama is not over yet. 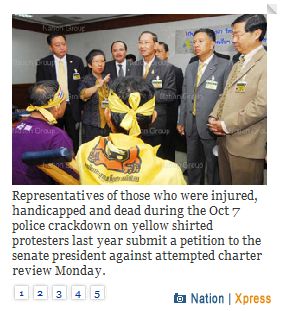 In fact, while there is still partisan mileage to be made from revisiting 7 October 2008 we will probably be hearing much more about the events of that day. We hope that our modest effort to consolidate the public information on the use of tear gas will assist New Mandala readers as they revisit this topic.