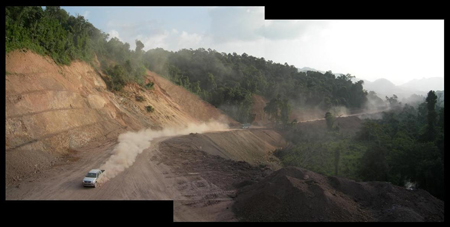 1. The Northern Economic Corridor — Laos’ national Route 3, shown here under construction in late 2006, is the final stretch of what is sometimes called the Singapore-to-London Highway. Funded by loans from the Asian Development Bank and the governments of China and Thailand, Route 3 is part of the ADB’s regional economic corridors project. Route 3 comprises the Lao section of the Bangkok-to-Kunming Northern Economic Corridor (NEC), running through the provinces of Luang Namtha and Bokeo. When ultimately finished with a bridge over the Mekong, the NEC will connect Thailand and China through this rugged and once-remote corner of northwest Laos. Even without the bridge, the otherwise-completed highway (photo 5) has already opened northwest Laos to an agribusiness investment boom, mostly from China. Focusing on rubber planting (photos 2-4), this photo essay documents a few of the NEC’s changing agrarian landscapes.

2. Producing available land — Attempting to compensate for the country’s lack of ports and highways, Laos’ investment boosters focus on promoting the availability of an increasingly scarce commodity in Southeast Asia: cheap and accessible land for export-oriented agricultural development. This photo, taken a few kilometers outside a rural district center along the NEC, shows two key ingredients for the production of available land: secondary roads (in the background) and fallow land (in the foreground). Tax policy and zoning-based efforts to sedentarize shifting rice cultivation have weakened village claims to lands which are rich in forest products and wildlife, rendering fields like the one shown here into economically “available” land for rubber development (on the horizon).

3. Capitalizing on tenure ambiguity — Negative experiences with large land concessions to Vietnamese and Malaysian agribusinesses in central and southern Laos led northern officials to embrace an investment policy based on the recognition of “village land” tenure in 2005. Nonetheless, plantations like this one, about ten kilometers up a dirt road from Route 3, have exploited both ambiguities in policy language and ongoing tenure debates in upland villages to achieve the practical equivalent of rubber concessions: large company gardens that nominally meet the requirements of the government’s 2007 moratorium on agribusiness concessions.

4. Re-territorializing the northwest — Local government is also taking advantage of newly-established Chinese rubber nurseries to enroll traditional economic powerhouses like sawmills and the army in their efforts to operationalize the national development policy of “transforming land into capital.” In this village, whose residential area lies along Route 3 (on the horizon), newly-planted rubber fields (in the foreground) show a partnership between local government and a nearby sawmill. In exchange for renewed logging rights, the sawmill owner provided economic development to villagers in the form of rubber seedlings. As Luangnamtha develops its eco-tourism industry, provincial officials are zoning roadside areas between conservation and rubber (glossed as “reforestation”) — and pushing logging, and with it road-building, deeper into the interior.

5. Infrastructure and observation — The paving of Route 3, shown here in late 2007, has shortened travel times and created year-round access to the villages along the NEC. With improved road access come not only new opportunities and risks for development intervention and state regulation, but also new possibilities for rapid assessment. As a powerful form of rapid assessment, documentary photography exemplifies this dilemma of opportunity and risk. If this essay has been successful, it will have put into concrete visual form a few of the possibilities, as well as a few of the hazards, that together comprise the project of development in a hard-to-access and hard-to-read landscape.

Mike Dwyer is a doctoral candidate in UC Berkeley’s Energy & Resources Group. He conducted fieldwork in Laos during 2006-08. His research was supported by the Social Science Research Council (International Dissertation Field Research Fellowship, with funds provided by the Andrew W. Mellon Foundation) and the National Science Foundation (Doctoral Dissertation Research Improvement Grant in Geography and Regional Science). He is currently writing his dissertation.