Note: All times are Thai times

7:36 pm: Any confirmation of reports of very low turnout in parts of Isan?

7:24 pm – Earlier today East Asia Forum published an essay (by Nicholas Farrelly) on today’s Thai election that will be of interest to some readers.

6:35 pm – For a while commentators were predicting a much narrower Pheua Thai victory than the exit polls predicted. But in the last half hour or so, as more votes are counted, the Pheua Thai lead seems to be opening up a little more.

6:35 pm – Reuters has expert comments on the exit polls.

Professor Thitinan Pongsudhirak said that a margin of 80 to 100 seats should give Puea Thai an unassailable victory. If they won over 250 seats it would be a clear mandate, while more than 280 seats could be considered a landslide. “If they win at all it’s a big statement,” he added. “[It means] the ideas and policies that made [Thaksin’s] original Thai Rak Thai party so electable are unstoppable and indestructible … This is a party that has been dissolved twice; its leading politicians have been banned twice; it’s being led by a deposed exile and former prime minister a six-hour flight away.” He said that a landslide would be “not just any landslide – it would mean we have a truly new country. Whether people accept that will determine how much pain and grief we have to go through.”

5:50 pm – Plenty of commentators on Twitter predicting Pheua Thai will get closer to 250 than to 300.

5:45 pm – The national [party list] count so far. Looks pretty close, but we are told that there is an over-representation of results from the south. 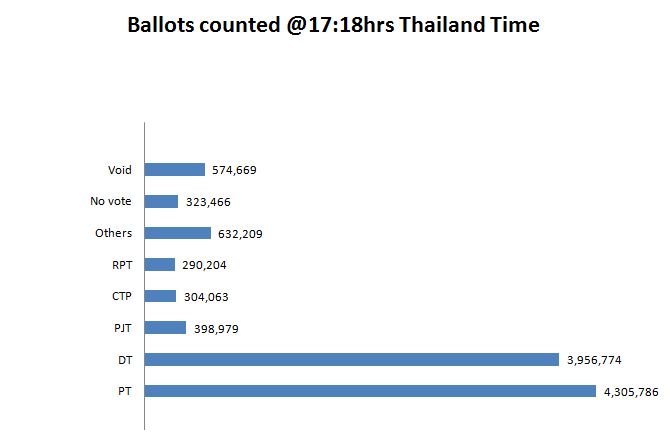 5:30 pm – Important point made by Jon Ungphakorn: “Whats so concerning about Thai MS media is the readiness to appease whoever gets into power like Chinese media after change of leadership”.

5:24 pm – Current official figures may be tilted towards Bangkok and the southern provinces. The exit polls provide one story. The formal vote count seems to be giving another. We watch-and-wait for more numbers from across the country.

Democrat’s spokesman Dr Buranat Samutarak said the party is waiting for official results of the general election. “At the moment, the party could not comment on the exit poll as we are now waiting for the official results,” he said. Prime Minister Abhisit Vejjajiva will talk to people in the evening, he said. Supporters of Democrat Party gathering at the party headquarter are still in high hope. They were heard shouting “Democrat, fight, fight.”

4:01 pm – Looking for some background on the 2011 Thai election? New Mandala offers details on the voting rules, the main parties, and the minor parties.

3:51 pm – Some of the #Thaielection Twitter coverage makes for very interesting reading. Saksith reckons “[t]his election day looks like it’s going to be the day of clear winners and clear losers!”

3:30 pm – In 2005 Thaksin won 375 to the Democrats 96 and 29 to minor parties. This won’t be as dramatic, but it doesn’t look like the coup, a new constitution, two party disolutions and scores of political bannings have damaged his electoral brand very much.

3:21 pm – All of the numbers we are seeing seem to be pointing to a very strong Pheua Thai showing. Current indications suggest Thailand will see a new government by the end of the night, with a resounding victory for (Prime Minister?) Yingluck Shinawatra and her Red Shirt allies.

3:01 pm – ABAC has published its exit poll. Early indications will put smiles on Pheua Thai faces. Word to New Mandala is that it predicts 313 to Pheua Thai; 153 to the Democrats. As our well-informed informant says “wow”.

3:00 pm – Polls have closed around the Kingdom of Thailand.

A few notes from sources in the mid-south and border provinces, as of “the night of the howling dogs” (kheun ma horn – night before election day).

CONSTITUENCIES TO WATCH IN THE “DEMOCRAT SOUTH”

Several former Democrat strongholds in Songkhla/Satun are in jeopardy, as follows:

Satun Constituency 1 is being contested by Thanin Jaisamut, former Democrat MP who swtiched to Chart Thai Pattana after Suthep Theuaksuban allocated him a low ranking on the Democrat’s party List. He has a strong local following in Satun, and two days ago Sanan Kachornparsart, CTP heaveyweight, visited the constituency to add weight to Thanin’s campaign, and was greeted enthusiastically.

In Songkhla’s Constituency 7, the Pheu Thai candidate is Asawin Suwit, son of a widely-respected former Muslim Democrat MP (Wichit Suwit) and fortmerly Deputy Presdient of the Province Administrative Organization. Asawin’s elder brother Naracha had succeeded his father as MP for Constituency 8 in the 2005 Democrat landside victory. However, he was never a satisfactory local member and was removed as candidate for the 2011 election by the Democrat Party candidate committee of Songkhla, which chose Surin Panare to contest the constituency. The Suwit family has now turned against the Democrats. Aswin has a strong following in Constituency &, which comporises the Muslim-majority districts of Nathawi, Sadao and Saba Yoi.

Aswin’s Democrat opponent is the standing member Sirichok Sopha, a parliamentary firebrand (and close associate of PM Apbhist) who contributed to the bringing down of the Thaksin government. However, he is
not locally-born, and people in the district comnplain that he is rarely in the constituency. Thgis author’s informants empohasize that in an effort to contest the force of Aswin’s popularity among local Muslims, DP
vote canvassers are ditributing large sums of money to voters. This is a standard tactic of the DP is hotly contested districts. In response, Aswin’s team, including his father, have distributed leaflets throughout
the constitutency condemning vote selling as a sin against Allah.

CHUWIT AND THE NO-VOTE IN HAT YAI

Voters in Constituency 2 of Songkhla (encompassing the city of Hat Yai) are reportedly dissillusioned with the Democrat Party for replacing the lacklustre local Sino Thaiu MP Larpsak Laparotakit with his son, who has no political experience. Many Democrat voters in the city are reportedly going to excercise a “no-vote” in protest. More interestlingly is that the mercurial Chuwit Kamonlawisit (The Love Thai Party)is favoured by voters for selection in the Party List vote. Chuwit’s popularity is also shared among numerous Democrat voters in Nakhon Sri Thammarat.

VOTE-BUYING IN THE THREE PROVINCES

Vote camvassers have been actively distributing cash for votes in the three provinces, as is the extablished custom. In Pattani, local informants report that Pheu Thai and Bhumjai Thai have been distributing
500 baht per individual. In Narathiwat Province, in one tough contest between the Mathuphum Party and the Democrats, the amount being distributed to voters is 1,000 baht per head.