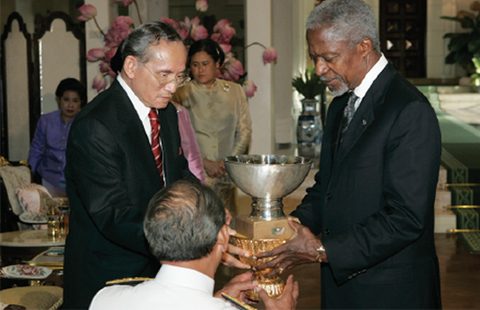 When I glanced through a Thai newspaper recently, I found almost everyone in the limelight of Thai society had a decorative name — be it military, police or academic rank.

This includes people with royally bestowed titles like Thanpuying Chanut Piyaoui, owner of the Dusit Thani Hotel chain and whose main hotel in Bangkok sits on land belonging to the royal family.

Another is Thanpuying Naraporn Chan-ocha, wife of General Prayuth Chan-ocha, the self-appointed prime minister of Thailand and junta chief. Earlier this year she was labelled as the ‘most able’ woman in Thailand.

And of course, there are lower royal rankings where a title can be purchased from a donation to various royally sponsored projects. This category includes Khunying Sasima Srivikorn, owner of the President Hotel chain who has donated millions and millions of baht to royal projects.

This penchant for prestigious titles is also typical of Thailand’s military.

Retired generals often fail to mention in any print media that they are a retired general, whereas in the UK, Australia or in the US their counterparts’ names are customarily followed with the word “retired.” Such practice is fair and decent so that people who may be dealing with the general know that he is no longer in active service and thus no longer in a position of power.

Because of the prevalence of Thailand’s latent caste system, even low raking military and police personnel often refer to themselves with a title.

These examples reflect the prevalence of Thailand’s hierarchy, which places the royal family at the top of the pyramid.

As if their names and titles weren’t long and prestigious enough, through royal lobbyist efforts the royal couple have been bestowed with a number of honorary doctorate degrees from foreign universities, mainly in the USA.

For example, the Thai king was bestowed honorary doctorates in law from Tufts University and Ohio University in 1985 and 2000 respectively.

This is quite a feat of scholarship; even more remarkable when it’s considered that King Bhumibol has not finished a bachelor’s degree from any college.

The Queen was given an honorary doctorate degree in Humane Letters from Tufts University and Georgetown University in 1981 and 1993 respectively. She received the same degree from Johns Hopkins University in 1995. The queen has never finished a bachelor’s level degree either.

As for Thai universities, the royal couple have been given honorary doctorates in all fields of knowledge by every university in the kingdom.

And in the world of Thai politics, politicians would also feel naked if she or he has no title preceding their name. Foreign universities’ doctorate degrees are the most sought-after by Thai politicians or other elitist individuals in the limelight of Thai society.

A number of Thai politicians shamefully call themselves “Doctor,” even though they purchased an “honorary” degree, not the conventional doctorate degree that requires them to conduct new research and complete a dissertation. Such behavior reflects the low quality of Thailand’s key leaders in Thailand.

Fortunately most decent universities would not sell their accreditation to any elitist Thai even when offered a huge amount of money.

I applaud the Australian National University for refusing to grant an honorary degree to King Bhumibol Adulyadej in August 1962, despite massive lobbying efforts by Thai diplomats and the country’s ambassador to Australia at the time.

Chatwadee Rose Amornpat is based in London. She was charged with lese majeste by the Thai junta in July 2014. For previous New Mandala coverage of her situation see this post.