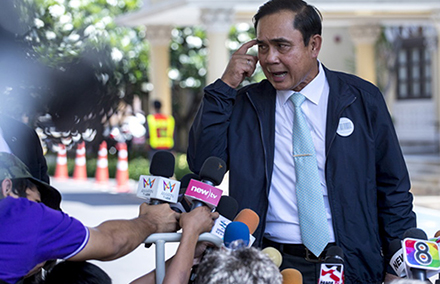 In the aftermath of the Bangkok bombing, all we’ve seen is an investigation characterised by inconsistency and incompetency.

As sympathetic as everyone must be towards the Thai and other victims of this week’s bombing at Bangkok’s Erawan shrine, we must also recognise that the Thai authorities’ response is turning a tragedy into a farce.

The host of contradictory statements emanating from police and, especially, from the erratic and incompetent dictator, General Prayuth Chan-ocha, suggest severe internal disarray, making it unclear whether the perpetrators will ever be caught.

There have been at least three major sources of confusion. The first is the nature of perpetrator. Initially, they were supposedly Thai: Prayuth instantly linked the bombing to an ‘opposition’ (ie Red Shirt) group based in Thailand’s northeast. The regime’s spokesman quickly rowed back from this, saying they could be foreigners.

Following the release of extremely grainy CCTV footage showing a yellow-shirted figure leaving a backpack at the shrine, police quickly declared – on no apparent basis – they were seeking a ‘“Caucasian” or “Arab-looking” man’ (sic).

However, the advisor to the deputy prime minister for security later stated it was unclear whether the figure was even a man or a woman. The release of an identikit apparently confirms his sex, but certainly not his ethnicity. Police still admit he could have been a Thai in disguise.

Secondly, how many culprits were they? Police initially declared that yellow-t-shirt man was ‘not just the suspect: he is the bomber’. Now they say they are only ‘more than 50 per cent sure’.

They subsequently identified two others in the CCTV footage as his accomplices. They then backtracked, saying that subsequent footage proved their innocence since they reacted ‘girlishly’ to the blast – truly a deduction worthy of Sherlock Holmes. (The two terrified men later handed themselves into police and were swiftly cleared of involvement.)

Even before that, though, other police spokesmen were saying that at least 10 people were involved in a ‘network’ – apparently pure guess work.

Third, were there any international linkages and motives? Initially it was implied that the supposed ‘network’ of 10 involved foreigners – though it took three days for Thai police to file the case with Interpol. However, international terrorists were then ruled out – apparently solely on the basis of discussions with allies’ intelligence agencies.

Prayuth again boldly declared this, while also dismissing any link to the recent deportation of 109 Uighurs to China (which might explain why Chinese tourists were apparently targeted). Yet, it was simultaneously reported that the police had been pursuing this as their main lead, with Special Branch having specific forewarning of a possible attack on Chinese tourists after 11 August.

Nonetheless, this was apparently scotched by Prayuth and his allies, who are still trying to refocus attention on internal oppositionists. Others in the police are suggesting an organised crime link – though why the Thai mafia should want to bomb the Erawan shrine is anyone’s guess.

Obviously, any attack of this sort, which catches security forces entirely unaware, creates confusion and panic, and a wide range of hypotheses must be investigated to narrow down an investigation. But the Thai response is particularly chaotic.

Yesterday, BBC reporter Jonathan Head found fragments of the bomb near the shrine and was unable even to hand them in to police – who instead subsequently criticised Head’s own knowledge of explosives.

Indeed, the haste with which the shrine has been swept and repaired may have seriously compromised the investigation. Prayuth and his allies have obviously prioritised the restoration of superficial calm and ‘happiness’ over apprehending the culprits.

This is all redolent of the 2006/7 New Year bombings in Bangkok.

Then, as now, the military ruler, Surayud Chulanont, instantly (and baselessly) blamed the Red Shirts. Then, as now, the sites were rapidly swept and repaired, undermining the investigation.

Then, as now, the regime seemed to be caught in complete internal disarray, with suspects ranging from Thaksin’s friends, to Thaksin’s enemies, to the police, to factions within the military regime itself.

Then, as now, Thailand’s Muslim separatists were instantly discounted as suspects – yet the best guess of Thai intelligence today is that the Pattani United Liberation Organisation was responsible (possibly with external assistance from Jemaah Islamiyah). This is consistent with the fact that no one ever claimed responsibility – a hallmark of separatist bombings in the South.

It also refutes the suggestion, repeated today, that the separatists have never struck outside the South and have never harmed tourists (10 foreigners were among the 38 injured).

Ultimately, no one was ever caught for the 2006 attacks. This could well be the outcome this time around.

The Thai police’s professionalism, competence, expertise, political independence and moral rectitude have not noticeably improved in the intervening nine years; they appear well out of their depth. Prayuth is even worse than Surayud: paranoid, bombastic, loose-mouthed, erratic, idiosyncratic and ignorant.

Having presided over a security disaster, he now has every incentive to direct investigators away from anything for which the military could also be blamed – notably the escalating Southern insurgency and the Uighur deportations.

Unsurprisingly, Prayuth immediately refused offers of external assistance – including help from the British government – as attempts to ‘intervene’ in Thailand. His brilliant solution was instead to urge Thai police to watch the US crime drama Blue Bloods to get ‘tips, ideas and insights’.

Many Thais see all this as a national disgrace. They are right.

Lee Jones (@DrLeeJones) is Senior Lecturer in International Politics at Queen Mary, University of London. He is author, most recently, of Governing Borderless Threats: Non-Traditional Security and the Politics of State Transformation (CUP, 2015).