It would be interesting to compile a list of Thai media coverage of the recent Wikileaks cables concerning Thaksin, Samak, the Queen, the Crown Prince, the King, Privy Councillors etc. A quick search by a colleague found the following, some of which have now disappeared.

1. Prachatai: (http://www.prachatai.com/journal/2010/12/32293) reports that Samak mentioned the involvement of a “high profile” person in the 2006 coup including the subsequent chaotic events in the country and the overthrow of the governments that had a link with Thaksin. It also reports the conversation between Gen. Sonthi and a former US Ambassador a day after the 2006 coup, and communications between the current US Ambassador and people in the Royal Household Office.

2. Bangkok Post (http://www.bangkokpost.com/print/211410/) reports that Samak accused the Queen of responsibility for the 2006 coup. The cable states that Samak “showed disdain for Queen Sirikit, claiming that she had been responsible for the 2006 coup d’etat…,” and “viewed himself as loyal to the King, but implied that the Queen’s political agenda differened (sic) from her husband’s.” It also reports the response from the Thai Ministry of Foreign Affairs regarding this cable and its authenticity and their reiteration of the non-partisanship of the monarchy. However, a US diplomatic memo also analyses the Queen’s attendance at the funeral of a Yellow Shirt member as a taint on the monarchy’s neutral position. It also states that the King told the military not to launch another coup in 2008. The report also mentions the Thaksin assassination plot.

3. ASTV Manager Online (http://www.manager.co.th/Home/ViewNews.aspx?NewsID=9530000176188) is almost exactly the same as that in Bangkok Post as they also took it from AFP.

Please post links to any other Thai media coverage here. Given that reports may disappear from on-line sources, it would be wise to save a copy.

As for the international press, this sort of coverage (from the Sydney Morning Herald‘s main page) won’t be making some people too happy. 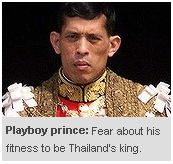