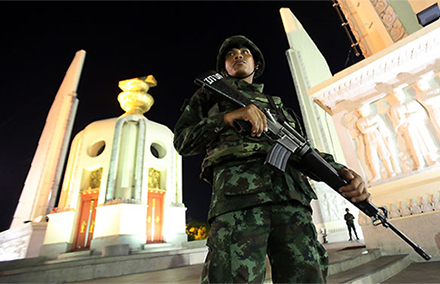 To draft an acceptable constitution for Thailand the junta must learn key lessons from past failure.

The decision came after directions from the ruling National Council for Peace and Order (NCPO), which took control of the country in the aftermath of last May’s coup. It has further delayed elections.

The NCPO is now recruiting a new CDC to draft another constitution. But this next draft is also destined to fail. Only a miracle will save the new CDC from the shame and humiliation suffered by former CDC head, Borwornsak Uwanno, and his team.

This constitution will not be a document of unity and prosperity as claimed by the junta. Those opposed to the NCPO will reject it, regardless of its content. Those who are pro-junta will embrace it without even glancing at what is has to say.

Thus, it is crucial that the CDC appeal to Thailand’s silent majority. The draft may then be accepted and drafters dismissed with grace, while possibly ensuring somewhat better governance than the current regime.

However, if a miracle is to happen, lessons must be learnt and the following advice should be taken seriously.

First and foremost, the drafters matter and the team must be well balanced.

Having conservatives in the CDC is not a problem as long as there are liberals too. The more problematic figures are those who actively appeared on the People’s Democratic Reform Committee stage during the ‘Bangkok shutdown’ of January 2014. Or those making contemptuous remarks publicly about the “uneducated lower class.” These radicals will see the drafting’s demise.

The opposite problem is that of deadwood; those who look for fame but contribute nothing to the task at hand. This excess baggage, mostly military generals out of touch with the world, is an obstacle to the drafting process. If they must be appointed for political reasons, it is better to “hide” them in the reform council where their incompetence is better concealed.

Second, be careful with spending. While former CDC members publically aired grievances about their terrible assignment, they forgot to mention that they were paid exorbitantly well.

Why should a man with three income sources mope? Many of them bagged a lot of cash serving the junta. Combined with the news of the junta’s wasteful spending, the former CDC was criticised for getting too highly paid in exchange for mediocre service. When the draft was rejected, critics suggested they should return these gains.

By drafting the constitution, the drafters often claim they are “serving the country.” But, if you volunteer to serve the nation, you must keep your monetary reward to the minimum. It should not turn into a for-profit enterprise.

Inventing non-democratic mechanisms is a sure way of getting the draft rejected. Thai constitutions are getting lengthier, more complicated, and less functional. The CDC should avoid discussing a third-party prime minister or the powerful crisis panel – the 23-member panel to take over government during a “national emergency”.

Anything undemocratic should not be bluntly replaced with the tag “Thai-style” or “Thailand only.” These tags are only pretext for arbitrariness and the people know it.

Fourth, be transparent. The former CDC drafted what was to be the supreme law of the land but the people knew nothing about its making. Often, the press was not allowed to observe the constitutional debate.

The only source of information came from the CDC spokesperson and sounded like propaganda, rather than the beginning of a dialogue. Secrecy entails that the wisdom of the Thai majority cannot be trusted. It outright insults Thais’ intelligence.

Finally, involve the public. Meaningful participation is vital for the legitimacy of the CDC and the draft constitution.

The CDC boasted that it conducted public hearings throughout the country, and was blessed by several groups of well-wishers. The CDC must stop fooling itself that the school children, college students, and civil servants who came to give support to the CDC signified genuine public acceptance.

The few formal public hearings never worked because they were too brief and came too late. These meetings simply served as rubber-stamping processes. The CDC should listen more to its critics, who, due to the junta’s suppression, communicate via less formal means such as social media.

Will the miracle happen?

The junta has already put forward some names with doubtful credentials. Certainly, the CDC will not be able to act independently from the NCPO, and it is likely to honor the junta’s wishes. That implies many undemocratic features that should be avoided in any constitution draft.

The junta will not relax its grip on Thailand anytime soon and unfortunately the oppressive atmosphere will only cloud the drafting. The fear of attitude re-adjustment programs renders any attempt to bring in sincere participation fruitless.

Let us wish the new CDC luck; they are really going to need it in the six months ahead.