There are rumours circulating in cyberspace that the health of Thailand’s crown prince, Vajiralongkorn, may have deteriorated significantly during a trip to Europe. Do any New Mandala readers have informed comment to make on this?

UPDATE 1: I have been told that press have been invited to a “public” event (at a Bangkok university – perhaps Kasetsart?) that will be attended by the crown prince on Friday. As one press representative commented “presumably this is a deliberate attempt to scotch the rumours.”

UPDATE 3 (26 July): It will be interesting to see if the prince makes his expected appearance tomorrow. New Mandala has received a number of off-line emails that make it clear that these rumours about the prince have been circulating extensively in Thailand and abroad. And they do appear to be more than run-of-the-mill royal gossip. Well-connected and well-informed commentators have taken the rumours seriously enough to investigate them in detail. And, of course, some have attempted to blame Thaksin for starting the rumours. The official line seems to be that the prince has been undertaking flight training in Sweden (how much training does he need?). But the rumours of some sort of medical crisis are not yet abating.

UPDATE 4 (27 July): This snippet from The Nation should put some of the more extreme rumours to rest (and what, exactly, does a Masters degree in Home Economics involve?): 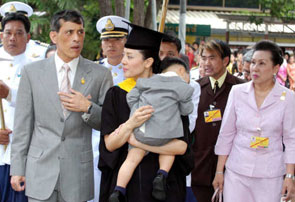