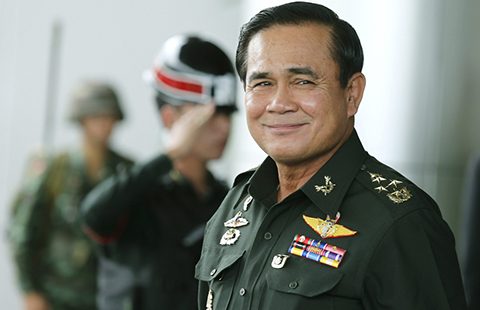 Outspoken critic Pavin Chachavalpongpun outlines the threats made to his family by military rulers due to his academic work and criticism of the monarchy.

On 24 February, just a few hours before my lecture at Oxford University began, I received a message from my sister who lives in Bangkok, requesting me to contact her urgently. She informed me the military had sent four officers to my house in Bangkok.

This is not the first time that the military have intimidated my family. Army officers visited my house twice last year, seeking to intimidate my family so that it would prevent me from challenging the authorities back home. Because I have long been critical of the military and the monarchy in the aftermath of 2014’s coup, the junta decided to summon me, twice, to have my attitude “adjusted”. I rejected the summons since I did not accept the legitimacy of the coup. Shortly afterwards, the junta issued a warrant for my arrest and revoked my passport. This situation forced me to apply for refugee status in Japan.

But punishing me is inadequate. The military has continued to harass my family in Bangkok. And what happened on 24 February could be considered the most daring move by the junta against my family and me. Apart from sending officers to my home, the military also called up my sister at her workplace twice.

The military ordered my sister to inform me that, should I not stop discussing the issue of the monarchy, my family would face serious consequences. Some of my family members would have to “pay the price” for my activities outside Thailand. The threats against my family have been made despite the fact that my family had nothing to do with my academic work or my personal views on Thai politics and the monarchy.

The army told my sister that she and other members were responsible for my actions since we are in the same family. The military also stressed that unless I leave the Thai monarchy alone, the military would not stop harassing my family. In other words, the military has held my family hostage.

What is totally absurd and unacceptable is the fact that the military demanded my entire family in Bangkok report to an army camp. Should they not respond to the summons, the military will revisit our home again, supposedly to continue to intimidate my family.

My sister felt that the threat this time was real. There are fears that my family members could be hurt, or their jobs affected. Undoubtedly, the military will be most likely responsible for such actions. In the past, there have been examples where those who are considered enemies of the monarchy have been punished and even killed – the case of the famed fortune-teller Moh Yong highlights this possibility.

I am in the process of contacting key international organisations working on the issue of human rights in Thailand, including those within the United Nations, as well as foreign ambassadors and diplomats in Bangkok, and international media, keeping them informed of this crime against my family. I also contacted local lawyers to represent my family members should they need legal assistance.

For a long while, I have been working on the issue of the future of the Thai monarchy as part of my academic research. My position on the Thai monarchy is somewhat perceived as a threat to the stability of the royal institution. It will not be surprising if the junta would charge me with lese-majeste for what I have been studying and lecturing about the monarchy.

During my lecture at Yale University on 1 December 2015, three hyper-royalists invaded my lecture and started to yell at me using foul language. They called me “son of a bitch”, described me as “full of shit” and accused me of being paid by former Prime Minister Thaksin Shinawatra with the mission seeking to defame the monarchy.

As the era of King Bhumibol Adulyadej comes to an end, a sense of anxiety has risen among the old elites. Anyone viewed as a menace to the royal institution has been dealt with harshly. Now that Thailand is in the custody of the military, a key partner of the monarchy, the situation for those criticizing the monarchy has become even more precarious. What has happened to my family and me could happen to anyone. Unless the international community realises the seriousness of the human rights violations in Thailand, small people like myself will continue to fall prey to the brutal regime that has exploited the monarchy for its own end.

Pavin Chachavalpongpun is an associate professor at Kyoto University’s Center for Southeast Asian Studies. He is currently a Beaufort Visiting Scholar at St John’s College, University of Cambridge.