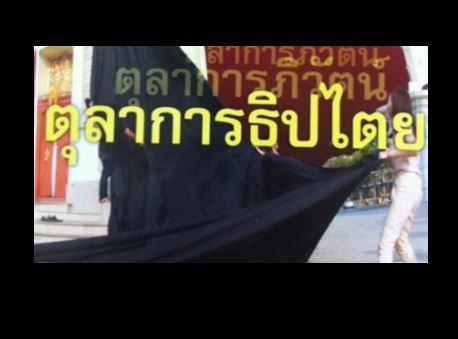 On 10 May 2014, three days after caretaker Prime Minister Yingluck Shinawatra was dismissed by a Constitutional Court ruling, royalist PDRC leader Suthep Thaugsuban issued a press release calling on the presidents of the Constitutional Court, the Administrative Court and the Supreme Court to consult one another to recommend a name to the King for appointment as non-elected prime minister. This proposal is supposedly made possible by article 7 of the 2007 Constitution, which states:

“Whenever no provision under this Constitution is applicable to any case, it shall be decided in accordance with the constitutional practice in the democratic regime of government with the King as Head of State”.

Article 7 has a long history. It was first added to the Thai constitution in 1959 after Sarit Thanarat’s coup d’état to allow authorities a level of discretionary power over how to interpret what was at the time a short constitution. Thereafter it became a traditional feature of post-coup Constitutions. In the 1972, 1976, 1977 and 1991 (1) Constitutions, it only referred to “the constitutional practice in the democratic regime of government” but starting with the 1997 Constitution onwards, the expression “with the King as Head of State” was added. From this point, customary constitutional practice became entrenched with a royalist reading of the country’s history- a history that places the monarchy as the main agent of Thai democratization and the savior of the nation whenever political crises threaten its survival.

No wonder then, that since 2006, article 7 has been interpreted by the royalists as meaning “direct intervention by the King to solve a national crisis”, based on previous royal interventions to solve national crises. Respected legal scholar Amon Chantarasomboon, one of the founding fathers of such innovative legal thought, cited the 1992 crisis as the precedent for such customary law. In 1992, after pro-democracy movements led to state repression and the downfall of the Suchinda Kraprayoon government, the King appointed his own choice, Anand Panyarachun, to become prime minister. References can also be made to 1976, when in the aftermath of the Thammasat massacre of 6 October, the King appointed Thanin Kraivichien, former president of the Supreme Court of Thailand, as non-elected prime minister. Three years before that, in 1973, after the crushing of the democracy movement in Bangkok, the King appointed another former Supreme Court president, Sanya Thammasak, as non-elected prime minister of Thailand. Supreme Court presidents have always been held in high esteem by the King.

No wonder then, that royalists call on the Supreme Court president to solve the current crisis. The proximity between the institution of the judiciary and the institution of the monarchy has been reinforced since 1997. As far as we know, Thai judges have always ruled “in the name of the King” and sworn an oath of allegiance to the King. But it is only since 1997 that the oath has been enshrined in the Constitution. Meanwhile, elected representatives swear an oath to the Constitution. Judges are put in a higher position than elected representatives.

The King, in his speeches to judges, often reminds them of the special relationship that unites both institutions:

“You have sworn an oath of allegiance, according to which you must perform your duty in my name. If you do it right, I’ll get the favour of your work performed in the public interest. If you don’t do it right, I’ll be dishonoured. (…) If there is no justice, it means people can cheat [kong] and do wrong, and if the courts do not perform their duty to support good people, the country will not survive.” [1]

No wonder then, that the royalist coup of 2006 established a juristocracy in Thailand through the 2007 Constitution. The drafters of the 2007 Constitution precisely intended to create a juristocracy in order to fight against “cheating” politicians. Proof that there was some degree of responsiveness in the constitution-drafting process is that constitution-drafters were forced to revert some of their initial juristocratic ideas after facing public opposition. A good example is the fate of paragraph 2 of article 68. In the draft of the 2007 Constitution submitted for public hearings in April 2007[2], article 68 para. 2 stated that in case of a national crisis, judges would act as the main agents to resolve it.

Like what happened to article 107, paragraph 2 of article 68 was opposed by many and was finally rebuked. Its advocates argued that it would prevent a coup d’état, while its critics said it would create a juristocracy.

“No person shall exercise the rights and liberties prescribed in the Constitution to overthrow the democratic regime of government with the King as head of State under this Constitution or to acquire the power to rule the country by any means which is not in accordance with the modes provided in this Constitution.

In the case where a person or a political party has committed the act under paragraph one, the person knowing of such act shall have the right to request the Prosecutor General to investigate its facts and submit a motion to the Constitutional Court for ordering cessation of such act without, however, prejudice to the institution of a criminal action against such person.

“In the case where the Constitutional Court issues an order dissolving the political party under paragraph three, the right to vote of the dissolved political party’s leader and executive committee members at the time of the commission of the offence under paragraph one shall be suspended for the period of five years as from the date of such order of the Constitutional Court.”

On 20 November 2013, the Court ruled that reverting the 2007-model of half-appointed Senate back to its 1997-fully-elected model was an attempt to overthrow democracy. The Constitutional Court, whose members Jaran Phakdithanakul, Suphot Kaimuk and Nurak Mapranit were also 2007 Constitution-drafters, became the guardian of an “un-revisable” 2007 Constitution and a key defendant of its inherent spirit, namely that of oxymoronic countermajoritarian democracy, based on fears of “parliamentary dictatorship’.

No wonder then, that popularly-elected Yingluck Shinawatra soon became the target of judicial attacks, some of which led to her dismissal by an unanimous ruling of the Constitutional Court on 7 May 2014.

Events seem to follow the same pattern as they did in the lead-up to the 2006 military coup. In 2006, when the PAD demanded royal intervention and called for a royally-appointed prime minister to replace Thaksin Shinawatra, the King replied:

“I am very concerned that whenever a problem arises, people call for a royally appointed prime minister, which would not be democratic. If you cite Section 7 of the Constitution, it is an incorrect citation. Section 7 cannot be cited. Section 7 has only two lines which says that whenever no provision under this Constitution is applicable to any case, it shall be decided in accordance with the constitutional practice [in a democratic regime with the King as Head of State] But asking for a royally appointed prime minister is undemocratic. [I] affirm that Section 7 does not empower the King to do anything He wishes[3]”.

So, the King refused to intervene, but empowered the courts to do so. A few days later, the Constitutional Court annulled the 2006 elections, caretaker PM Thaksin Shinawatra was called upon to resign, but he did not. Elections were scheduled for October 2006 but a military coup was staged before they could take place. These elections would have seen yet another victory of Thaksin Shinawatra and the 2007 Constitution empowering an insulated judiciary would never have existed.

No wonder then, that a revision to reverse the 2007 charter to a 1997-like Constitution, providing for a strong executive not tempered by an half-appointed Senate, was ruled unconstitutional by the Constitutional Court. Legal practitioners – judges sitting in courts and independent organizations but also most of the jurists – have an inherent interest in the preservation of the current juristocracy.

Over the course of the 2006 crisis and through the 25 April 2006 King’s speech to judges, a new customary rule had emerged: the judiciary is mandated by the King to solve the crisis by resorting to extra-constitutional powers. (If necessary, the military can also step in using the pretext of preventing violence).

All in all, Thai politics is very coherent.

Eugenie Merieau is a fellow of the Southeast Asian-German Center of Excellence for Public Policy and Good Governance, Faculty of Law, Thammasat University in Bangkok and a lecturer of Southeast Asian public law at Sciences-Po in Paris.

[2] The draft I am referring to can be downloaded here http://www.thprc.org/book/node/2.htm