Thailand’s law of the mob

Why Thailand is at risk of being trapped in festering cycles of forgotten violence.

On 14 October 1973, some 500,000 students, activists and intellectuals took to Bangkok’s streets to protest Field Marshal Thanom Kittikachorn’s military regime, demanding a new constitution. The peaceful demonstration ended in terror. But so did the junta’s reign: popular uprising prevailed against an apparatus of draconian laws, arbitrariness and other tools of oppression.

Forty-three years later on 14 October 2016, a mob 500 strong descended on Suthee Arammetapong’s soymilk shop in southern Phuket, demanding the arrest of the shop owner’s son. The mob accused the man of violating Article 112 of the Criminal Code — the lèse-majesté law — in having shared the Buddhist-themed Facebook status, ‘Being born, existing, and dying is normal. Why do you have to be so alarmed?’ Video footage of the protest has been viewed more than one million times on Facebook.

The soymilk incident was the first public act of political mobilisation in Thailand since King Bhumibol’s quiet passing on 13 October. But similar cases where crowds call for strict applications of Article 112 — dubbed by some as ‘black shaming’ — are multiplying day by day. The very next night an angry mob in Takua Thung district marched on a roti store to demand the arrest, once again, of the shop-owner’s son for lèse-majesté. Alarmingly, Thailand’s Justice Minister has since commended group vigilantism as the best way to protect the monarchy.

This month, we are witnessing the opposite of popular protest breaking down oppressive laws. Mob justice has demanded the enforcement of Thailand’s lèse-majesté law — even in the face of authorities’ objections that there was not yet adequate proof of a crime to warrant arrest. Law acted as a point of mobilisation as the mob called for immediate prosecution. The contrasting demonstrations seen in these two Octobers, strewn across almost half a century of Thai history, unearths a clearly complex relationship between popular protest and the country’s laws. 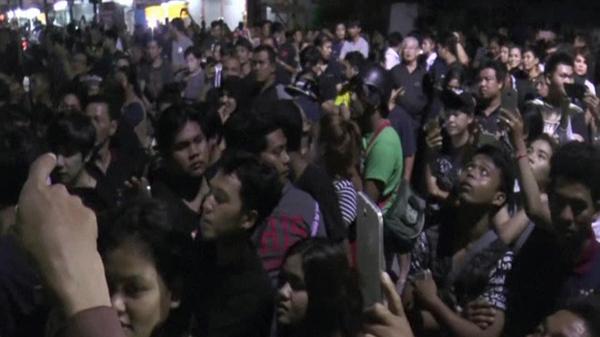 A mob gathers outside Mr Suthee’s shop in Phuket.

Protest in authoritarian societies is conceived conventionally as a phenomenon in tension with law. Among other triggers, it emerges — as it did in 1973 — in opposition to unjust laws, sometimes in the form of defunct constitutions. In both closed and democratic conditions, protesters take to the streets when formal legal processes for change are viewed as ineffectual. Oppressive regimes attempt often in turn to control public unrest through further legal restraints. In Thailand, we see this through a ban on political gatherings of five or more people, additional regulations on public assemblies enacted in 2015 and, of course, Article 44 that offers the junta limitless authority if all else fails.

Crowds mobilised in support of Article 112 since King Bhumibol’s death challenge the conventional view of protest as subversive. To some extent, ‘black shaming’ may be the impulse of a grief-stricken citizenry, a nostalgic desire to keep the memory of King Bhumibol alive turned violent, or the actions of a body politic that fears the instability of their future. There are surely grains of all of the above at play. But another cause for escalating public unrest is written in the letter of the law.

The point is not merely that that the mob justice unfolding in Thailand is seeking to promote and uphold Article 112. It is that lèse-majesté has itself long promoted collective violence in Thailand. Virulent outrage outside Suthee’s soymilk shop was not just the expression of individual mourning. Such reactionary aggression was connected to a law that has for decades shaped Thailand’s histories of social conflict and political violence and massacre.

Crucial to our dialogue of Octobers then is 6 October  1976, a tragedy made all the more so by it having been erased from history textbooks and the probing of social memory. Forty years ago, pro-democracy student protestors were gunned down at Thammasat University. The massacre began after students were accused of staging a mock hanging of the Crown Prince, though the performance was likely a re-enactment of the hanging of two student activists who had been beaten after distributing anti-junta posters.

The timing of this month’s ‘witch-hunts’ are one reason why they are so chilling. 6 October is being commemorated with the very acts of political violence — performed however much out of love for the monarchy — that the date should serve as a warning against. At Thammasat University’s commemoration of 6 October this year, speakers asked the question of whether Thailand has gleaned enough historical lessons from the disturbing massacre for such an event to never occur again. Just a week after its 40th anniversary, their questions receive a brute answer.

Article 112 has stifled the voice of Thai history so that the past fails time and time again to warn against the dangers of violence in support of the monarchy. For decades writing and speaking openly of 6 October was out of the question, due also to other limits on freedom of expression enforced by Thailand’s various juntas. Raising questions over the role of the monarchy in the massacre remains even further out of the realm of possibility. Yet while King Bhumibol’s image as the nation’s protector rests considerably on his sheltering of student protesters on 13 October 1973, no reprieve came from the palace three years later.

As the wisdom of the past is muffled, the voices of ultra-royalists grow louder. In this way, lèse-majesté is a law that breeds hatred and legitimises violence. It nurtures community conflict, obstructs reconciliation and nurses discontent. On top of all this, Article 112 is now also a law that stands on dangerously infertile ground. Its sustainability in light of the Crown Prince’s reputation is questionable. Thailand ignores the mutually re-enforcing relationship between Article 112 and public unrest at its own peril — ironically, this is true also for the National Council for Peace and Order (NCPO).

Military regimes can be sustained by primordial histories for only so long. Juntas in Thailand since the era of Sarit Thanarat have legitimised themselves through narratives of stability maintenance and protection of the monarchy. The NCPO’s legitimacy rests considerably on it seeing the succession period through smoothly. This explains its active, and somewhat out-of-character, attempts to constrain ultra-royalism this month, with the junta’s spokesperson having repeatedly condemned group vigilantism while calling for citizens to use legal process to report lèse-majesté cases instead.

The NCPO needs to recognise that relying on Article 112 as a control mechanism is self-defeating. Thailand is unlikely to see peace without the removal of its lèse-majesté law — the country’s historical mating of royalist fervour and violence needs to be laid bare. For the NCPO, subduing unrest in relation to the monarchy will be best achieved not through the promulgation of more laws, regulations and restraints, as has been the traditional impulse of the regime. The opposite is the case.

The nature of ‘black shaming’ is conservative in its upholding of the legal status quo, making this manifestation of political mobilisation an unsuitable basis for ‘moving Thailand forward post-Bhumibol. In contrast, the 1973 activist generation was at its time an academic avant-garde and the flame of liberty burnt bright. Only this form of protest, existing in an uneasy and subversive relationship with the law, can contribute to the breaking of Thailand’s cycles of authoritarianism, violence and unlearned lessons.

It is hopeful then that retaliations against ‘black shaming’ have already begun. A petition condemning the behaviour that took place outside Suthee’s soymilk shop was launched the very next day, with over 1,700 supporters and counting. These events represent an important dialogue around the question of whether there are limits to royalism, and what role there is for the public in negotiating these limits.

But unless Thailand’s lèse-majesté law is removed, historical wounds will for the most part fester and political violence will continue. Thailand risks not moving on after its period of mourning, trapped in its old cycles of forgotten violence.

Shui Yu and Elias Ross are pen names. The authors are research students based at the Australian National University studying Thailand and contemporary Southeast Asian politics.