The key findings on Thailand from the World Bank’s East Asia and Pacific Economic Update (May 2012) highlight the resilience of the Thai economy, despite political uncertainty and massive natural disasters:

In 2012, Thailand’s real GDP is predicted to be at 4.5%. Growth is due to lower global prices, government corporate tax reduction, a strong banking sector, and high international reserves. China’s considerable economic growth and signs of recovery in Japan and the USA have also had a positive effect on Thailand’s economy.

The Government of Thailand’s flood recovery and rehabilitation programs, as well as its income support policies, have helped boost confidence. Reconstruction and public investments will help the GDP growth in 2012, but imports will also rise.

The challenges the Thai economy will encounter in 2012 are: (1) The Eurozone crisis may affect exports; (2) Fall in rice exports due to uncompetitive prices; (3) Inflation, estimated at 3.5%, is due to Government income/consumption support policies, and reconstruction needs; (4) The threat of floods, which may affect consumer and investor confidence.

Thailand will need to be prepared in the event of the severe global economic slowdown by ensuring adequate fiscal space while quickly improving productivity and competitiveness of Thai exports.

The Yingluck government has every reason to be satisfied with this assessment. The significance of the post-flood recovery is highlighted by this World Bank graph showing growth rates in 2011. In 2010 Thailand’s growth rate was 7.8 percent. This plummeted to only 0.1 percent in 2011. The World Bank’s prediction of 4.5% for 2012 puts Thailand somewhat below the East Asia average of 6.3% but it is a strong return to growth considering the massive economic dislocation of the 2011 floods. Yingluck’s handling of the flood’s themselves attracted a lot of criticism, but in macroeconomic terms at least the post-flood recovery has been much more impressive.

One other issue warrants comment. In the wake of Yingluck’s exceedingly generous rice price support for farmers there were concerns, echoed in the World Bank’s assessment, about the reduced competitiveness of Thai rice exports. According to FAO forecasts, Thailand will remain the worlds largest exporter in 2012, though with a significant drop from 2011 (from over 10 million tonnes to about 7.5 million): 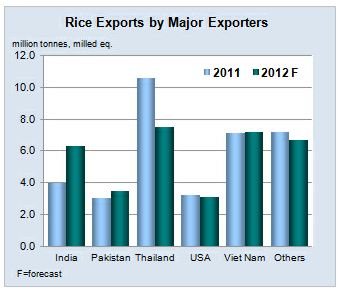 The Thai government has a more upbeat assessment:

The permanent secretary expected rice exports would total at least nine million tonnes this year. “Thailand will be able to maintain its world number one rice exporter status. In the past we focused on export quantity in keeping the championship post. But now we will also emphasise our rice’s quality standard and are looking at more premium markets,” Mr Yanyong said. He said his ministry expected the world market price of Thai Hommali rice would increase by five per cent to US$1,200 a tonne and by 15 per cent to US$700 per tonne for white rice. This would allow the domestic price of paddy to stand at 15,000-20,000 baht per tonne.

However this is contested:

Kobsuk Iamsuree, chairwoman of the Thai Rice Exporters Association, disagreed with the ministry’s rice exports projection for 2012. She said her association still predicted rice exports for the year at only 6.5 million tonnes. If the government is to increase rice exports to nine million tonnes, as planned, it would have to get it done through a government-to-government selling agreement, said Ms Kobsuk.

In other words, its too early to tell what the outcome for 2012 will be.

The big winner in the global rice trade is India:

India’s resumption of non-basmati deliveries, after it lifted its 3-year export ban last September, is instigating growing competition and falling prices, a trend that is hitting Thailand’s exports most negatively. Reduced availabilities may also depress sales by Argentina, Brazil, China, Myanmar, the United States and Uruguay.