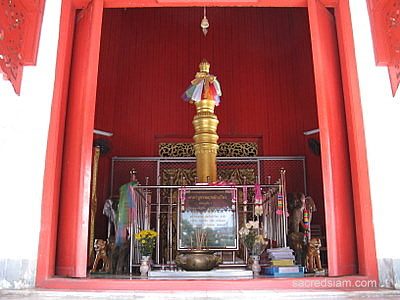 In a recent post on New Mandala I wrote of the relative success of the Thai monarchy in displacing other sources of royal power within Thailand. For all monarchies, this displacement is crucial for survival. Not only are rival royals a threat in military and political terms, but a proliferation of royalty would raise questions about how one particular royal lineage had managed to achieve symbolic primacy.

In recent months I have been working on the Shan rebellion which erupted in Phrae in July 1902. One of the principal victims of the rebellion was the royal chief (jao muang) of Phrae, not because he was overthrown by the rebels but because he was accused by the Siamese of collaborating with them.

According to Tej Bunnag’s account, a band of Shan bandits attacked Phrae on July 25 1902. They destroyed the police station and the post office, cutting the telegraph connection with the outside world. Joined by several hundred Shan residents of Phrae, they destroyed the residence of the Siamese commissioner, eventually capturing him and executing him along with twenty other Siamese officials.

The rebels then tried to march on Lampang, but they were repelled by a combined force of provincial police and local militia. The leader of the Shan was killed, sapping the nascent rebellion of much of its energy.

Siamese forces were quickly mobilised and they arrived to re-occupy Phrae in late August 1902. The rebels had scattered.

Among the key findings of the commission of enquiry established by the occupying general was that the jao muang of Phrae had actively encouraged the rebellion. The evidence for this was circumstantial: the jao muang had made no attempt to mobilise local forces against the Shan; there were reports that he told villagers to supply the Shan with rice; and one of the local nobles told the Siamese forces that the jao muang had been aware of the rebellion several days before it actually took place. There were also compromising communications with the jao muang of Lampang, seemingly encouraging him to join the anti-Siamese movement.

Tej Bunnag argues that the jao muang of Phrae was threatened by expansion of Siamese power in northern Siam. The establishment of a Siamese administrative presence, underlined by the presence of a Siamese commissioner in Phrae itself, greatly reduced his financial power and his control over manpower. Being somewhat remote from the northern centre of Siamese administration in Chiang Mai, the jao muang decided to chance his arm at rebellion. He allied himself with Shan bandits operating between Phrae and Lampang and, according to Tej’s account, tempted them with the prospect of 40,000 baht being held in Phrae to cover the costs of Siamese administration.

The jao muang of Phrae was found guilty of rebellion, sentenced to death and all his property was confiscated. Somehow he managed to flee to Luang Phrabang. Phrae was totally incorporated into Siamese administration. The jao muang died seven years later.

One less royal for Chulalongkorn to deal with!

Against the odds, there are some who seek to defend the reputation of the unfortunate ruler of Phrae. A 2003 article in the Bangkok Post quoted Ratana Wangsai, “whose grandfather served Jao Luang (King) Priyatepawong, the last king of this northern town.”

The Jao Luang’s role in the 1902 rebellion, he said, was actually designed by King Chulalongkorn himself. The King orchestrated it so Bangkok could use the revolt as a reason to eradicate the Ngiaws or Tai Yai, the power base of the British in Phrae, and derail British plans to take over the northern kingdoms. Only a few people knew of this plan to save Siam from being carved up by colonial powers, Ratana said. All of them had taken a sacred oath of silence or risk being doomed to a painful death at the wrath of the spirits.

One such person was Jao Wangsai, Ratana’s grandfather who served the Jao Luang. Wangsai later enlisted his son, Jao Noi Mok (Ratana’s father) to help out with the logistics. But Jao Noi Mok told Ratana’s mother, Jao Sanggaew, the secret because he needed her to be in charge of the food supply during the operation.

Although Jao Noi Mok spilled the secret out of necessity to carry out the royal plan, and even though his mother later took the sacred oath of silence, Ratana said his father still suffered a terrible death. He was crushed by an elephant during a ceremony to subdue it. Ratana was only eight months old at the time.

“When I was a little boy, I often asked my mother whether it was true that the Jao Luang committed treason. She always said no and insisted that the Jao Luang made deep personal sacrifices for a great cause. But she never elaborated,” Ratana said.

Until she was 78 years old, that is. “At that age, I guess the death threat from the sacred oath no longer bothered her. She decided to tell me what really happened because she didn’t want the truth to go with her to her grave,” Ratana said…

Ratana broke his silence recently at a civic forum on how to revive local pride and culture to instil a sense of identity among Phrae youngsters.

According to Ratana, the late Jao Luang Piriyatepawong believed that modern administration was necessary for Phrae to develop. Therefore, he did not oppose King Chulalongkorn’s policy to introduce a new administrative system even though it meant his own loss of power.

When the Jao Luang was contacted by the Ngiaws who were under British protection about working together to rebel against Bangkok, he actually reported it to King Chulalongkorn, said Ratana.

The royal advice was that he should go along with the plan. For had Bangkok arrested or killed the Ngiaws or Tai Yai without firm justification, the British colonial power would have had a reason to strike at the Bangkok court and force it to give up some northern territories for British occupation.

Ratana said his grandfather’s house actually served as a hiding place for some Thai officials and their families when the Ngiaws struck.

The gun that Phrae policeman and historical hero Taad used to fight the Ngiaws to his death also belonged to his grandfather who gave it to Taad to defend himself, knowing that the courageous officer would not run away to safety. The gun was later returned to the Wangsai family, who recently donated it to the provincial museum for public display.

Whether or not jao muang Phrae was an anti-Siamese rebel doesn’t really matter.

What does matter is that stories of regional, provincial and local royalty can add colour, nuance and historical context to Thailand’s dominant royalist narratives.

These stories raise many more questions than they answer, and the cultivation of doubt and uncertainty may well be the best way of tackling the challenge of royal power that Thailand now confronts.