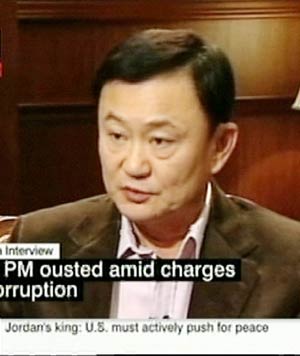 Thaksin’s interview with CNN is available here (but don’t tell the junta you are watching!). And a full transcript is available here (and reproduced at the end of this post). The Nation has written about the interview and reports the decision of some Thai TV stations not to broadcast it. And the Bangkok Post has an article about Thaksin’s travels upsetting the military regime. Apparently, if it was not for the travels (and now the CNN spot) all those gormless Thaksin supporters would have forgotten all about him.

Deposed Prime Minister Thaksin Shinawatra’s movements overseas are making the interim government uneasy, according to Air Chief Marshal Chalit Phukbhasuk, vice chairman of the Council for National Security (CNS) which deposed Thaksin. Thaksin was in New York attending UN meetings when the CNS deposed his government in a bloodless coup last September 19. Since then he has made “personal” visits to Britain, China, Indonesia, and most recently Singapore, and Thai officials have said they feel he is doing so to keep himself in the news so his supporters will not forget him. Thaksin’s travels, including his most recent to Singapore, have made the military-appointed interim government uneasy and the government needs to come up with some actions. Last week the government revoked Thaksin and his wife’s diplomatic passports, giving them two weeks to transfer any visas to a regular passport.

UPDATE: In case anyone is having trouble accessing the CNN site, here is the transcript of the interview:

SINGAPORE (CNN) — CNN’s Dan Rivers spoke to ousted Thai Prime Minister Thaksin Shinawatra. The following is a transcript of the interview. Rivers began by asking Shinawatra about his alleged involvement in New Year bombings in Bangkok.

Shinawatra: It’s baseless allegations. No one believes so. Because everyone knows who is, who am I. I come from election, I come from the people. I owe gratitude to our people. I do everything for the good of the country and the people. I don’t do something that’s stupid.

Rivers: So you had no involvement.

Shinawatra: Not involvement at all. But I would like to express my deep sympathy, deepest sympathy for those who lose, lost their loved ones and also all those who are injured. And the individuals who are involved must be brought to justice.

Rivers: This is the first time you’ve spoken since the coup of September the 19th, first of all, you were in the United States, in New York at the U.N., when this happened, how did you find out that this was going on?

Shinawatra: Well I find out just about four, five hours before, before it happened, but I trying to get into the television station but it’s very difficult at that time I cannot get into it until I can get into channel 9 briefly, but you know, which I, it’s a rumors at that time but I don’t believe that this can happen again in the 21st century.

Rivers: So it was surprise when it happened?

Shinawatra: It’s very surprise because you know, but anyway 70 years in Thailand, 17 coup happened is very unfortunate but it’s, it’s an event that happened here in Thailand.

Rivers: Will you go back to, back to politics?

Shinawatra: No. No. (DR: Go back as a private … ) Enough is enough. Six years you serve the countries. You been working hard. You sacrifice your time even your life. And, even your family life. So it’s, it’s time for me to go back as a private citizen. And contribute to the Thai society outside political arena.