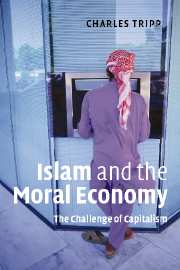 Anthropologist Grant Evans has written an interesting review (for the Bangkok Post) of Charles Tripp’s Islam and the Moral Economy [evans-on-tripp.doc]. He links Tripp’s argument about an Islamic moral economy, with Thailand’s ongoing southern violence:

In his erudite examination of Islam Charles Tripp shows that Muslims have a long scholastic and legal tradition that attempts to grapple with issues of economic justice, and which forms the core of their thinking about economic action in the modern world. “Thaksinomics”, therefore, was more than “just economics” for the Muslims in the South. Its raw, abrasive version of capitalism aggravated long-standing cultural dilemmas felt by Muslims.

The argument is intriguing, but it raises the question of how Thaksin’s “raw, abrasive version of capitalism” was actually experienced in local economic and cultural systems. Evan’s points out, quite rightly, that “in terms of economics, Muslims are not totally free to act amorally or immorally.” But are Thaksinites, or the diverse implementers of Thaksinomic policies?

In his conclusion Evan’s suggests that the common “moral economy” ground between Islamic economic theory and royalist sufficiency economy provides some basis for engagement between Thailand’s Buddhist majority and the Muslim minority.

… even if the elaboration of an Islamic economic theory is a chimera, it projects a set of Islamic idioms and moral meanings that modify the terms in which Muslims engage with the modern global economy. In a similar way the Thai monarch’s speeches against greed and for people to be conscious of their needs, now elaborated as the “sufficiency economy”, also injects a moral discourse into Thai developmental thinking – even though the “sufficiency economy” is no more likely than “Islamic economics” to succeed as an economic theory. But it does provide an idiom of engagement with southern Thai Muslim cultural concerns in a way “Thaksinomics” never could.

I suppose it’s a matter of how credible such a sufficiency based idiom of engagement may be. For the residents of at least one model sufficiency village it may be a bit hard to swallow.