Hindsight is generally defined as “the ability to understand, after something has happened, what should have been done or what caused the event”. In few disciplinary areas is hindsight as useful–and as frequently exercised–as in the study of elections. Thus, the following discussion offers a number of preliminary lessons from the 2014 parliamentary elections for scholars, pollsters and politicians–all with the benefit of hindsight.

First, the lower-than-expected result for PDI-P (19 percent instead of the envisaged 25) puts to rest the idea that a hugely popular presidential candidate can pull his party to a level of support that is congruent to his own. Of course, there had been precedents: in 2004, Susilo Bambang Yudhoyono won the presidential elections with 61 percent of the votes, while his Democratic Party had gained only 7 percent; five years later, Yudhoyono again obtained 61 percent, while his party received 21 percent–with the full advantage of incumbency and following a massive hand-out of cash to the poor. However, many observers–and PDIP politicians–believed that Jokowi’s popularity in 2014 was so unusual and the hype surrounding him so widespread that he had the potential to do what Yudhoyono failed to achieve: to lift his party into the spheres of his own electability ratings. That he was unable to do so should make analysts and practitioners alike more careful about establishing links between parliamentary and presidential elections on the one hand, and the popularity of presidential candidates and that of their parties on the other.

While this analytical insight into the fundamental differences between legislative and executive elections led to a disappointing election night for PDIP, it also holds the continued promise of a convincing victory for the party’s candidate in the July presidential elections. While some commentators were quick to announce the end of Jokowi’s aura of invincibility, and predicted that Prabowo would now have a chance to overtake his competitor, the voters had a different view. Ignored by most media outlets, the exit poll conducted by Cyrus Network and CSIS at the polling stations found that a Jokowi-Jusuf Kalla pairing would beat Prabowo-Hatta Radjasa with 41 to 22 percent, with Wiranto-Hary Tanoesoedibjo coming in third with 14 percent and Bakrie-Pramono Edhie Wibowo with 10 percent. 13 percent of respondents refused to answer. Given that the July elections are likely to see only three pairs contesting the presidency, this result puts Jokowi still in close reach of a first-round triumph. Thus, the parliamentary elections have not so much cast doubt on Jokowi’s ability to win–rather, they have changed the dynamics of the coalition with which he will be forced to govern. Initially aiming at a smaller alliance that could break the tradition of oversized coalitions begun by Abdurrahman Wahid in 1999, Jokowi now faces the prospect of having to include parties that he would have preferred to ignore.

The second major lesson from the elections concerns the validity of polling experiments that try to project election outcomes under different candidate scenarios. Almost invariably, polls that had seen PDI-P at over 30 percent were projections in which respondents were either told that Jokowi was the party’s presidential candidate or were asked to assume that this was the case. This experimental polling created a counterfactual situation–the real ballot sheets made no such connection between party and presidential candidate. In polls that exclusively explored a voter’s party choice–without a “leading” question that tied parties to presidential nominees–PDI-P’s vote share was much closer to its actual result. A CSIS poll taken in late March, for example, had PDI-P at 20 percent if only the party symbol and name were shown to voters; when voters were asked to imagine a scenario in which Jokowi was PDI-P’s presidential candidate, the party’s vote share shot up to 33 percent. An Indikator poll published only days before the elections showed similar patterns. Clearly, such polling experiments will have to be seen with much more skepticism in future elections. 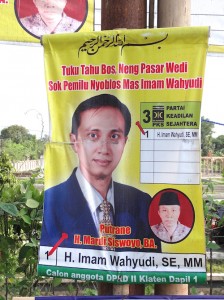 Third, Indonesia’s PR system with an open party list has made it much more difficult for national parties to run coherent campaigns and to anticipate their results. The 2014 elections have seen this system implemented for the first time in all of its aspects–in 2009, it had been abruptly introduced through a court decision. While some researchers previously noted that the open party list system–which shifts the focus of competition from parties to candidates, and creates incentives for heavy intra-party rivalries–has a significant influence on the way campaigns are conducted, few observers had anticipated that it would change the national power constellation. But this is precisely what happened: with campaign posters dominated by the faces of candidates instead of party symbols, many voters prioritized a candidate’s performance, religio-ethnic identity, family and clan connections, offer of material rewards, and so on, over abstract national party profiles. As a result, the balance between the various parties has been much more even than in any other Indonesian election: seven of the ten parties that gained seats in the 2014 parliament are in the five to ten percent range, while the largest party fell under 20 percent for the first time since 1955.

This individualization and fragmentation of electoral politics–described by Edward Aspinall in an earlier blog–is reflected in the gradual decline of party identification numbers (i.e., the percentage of voters who feel close to a particular party). While that number stood at 50 percent in 2004, it fell to 15 percent in March 2014. In those ten years, Indonesia had moved from a partially open party list system to a fully open one, introduced direct presidential elections, and launched popular ballots for local government heads. In all of these cases, the role of parties has been systematically weakened, and the significance of personalities strengthened. In this context, 2014 marks the year in which the personalization tendencies in legislative elections reached their peak, and the implications of this development for the future study of Indonesian elections are hard to overestimate.

Fourth (and related to the point made above), pollsters will have to move increasingly from nationwide polls to surveys based on electoral districts, or dapil. In many candidate-centered democracies, this has already happened, and Indonesian pollsters will have to follow suit if they want to achieve better levels of accuracy in their opinion polls. In the polls conducted for Indonesia’s 2014 elections, voters were invariably asked which party they would vote for if the elections were held on that day, effectively asking them to evaluate a party’s national reputation and attractiveness. On the actual voting day, by contrast, voters made their choice to a large extent based on the quality (or generosity) of the candidates that stood in their electoral district. This gap between nationally focused preference polls and locally grounded votes for candidates goes a long way to explain the discrepancy between the pre-election opinion surveys and the actual election result–in particular, the better-than-anticipated outcomes for NasDem, PAN and PKS.

While these structural trends in Indonesian elections help to contexualise the apparent failure of the “Jokowi effect”, they do not suggest that PDI-P couldn’t have achieved a better result by managing the Jokowi nomination in a more effective way. With the benefit of hindsight, it was na├пve of the PDI-P leadership to believe that it would be a good idea to nominate its presidential candidate only two days before the start of the national campaign. Naturally, there was almost no time to develop an effectual campaign infrastructure, hire professional staff, come up with a coherent timetable as well as a list of areas that needed to be targeted, and conduct substantive discussions on what message to convey (hence, it was ultimately decided that Jokowi would not address programmatic issues at all). Given the sudden announcement of Jokowi’s nomination, there had also been few discussions on how the various layers of the party would interact with Jokowi’s personal team, leading to communication problems and disagreements over who was in charge. Clearly, these issues could have been avoided had the party nominated Jokowi in January, as had been suggested by his supporters at that time.

Overall, then, the 2014 legislative elections offer much food for thought – for scholars, pollsters and politicians. There are long-term trends in the elections that will need to be researched by scholars and pollsters in more detail in the years to come – but also short-term lessons for practitioners (most notably, Jokowi and PDI-P) that could help them to build a more effective campaign apparatus for the upcoming presidential ballot.

Dr Marcus Mietzner is an Associate Professor at the Department of Political and Social Change and the Australian National University. His research focuses on political parties, democratisation and civil-military relations in Indonesia.