Universal history has no theoretical armature.
Its method is additive; it musters a mass of data to fill the homogeneous, empty time.

Walter Benjamin, ‘Theses on the Philosophy of History’

Memorising dates is one of the worst things about doing history. As its practitioners, we would rather study the past in terms of its great personalities, its sweeping themes and its intricate chains of cause and effect. But thanks to our reliance on chronology, we sometimes end up as mere musterers of data, as passionless traffickers of fact. We get bogged down in trying not to forget the utterly forgettable combinations of day, month and year that label each event. We look at dates as lifeless things, as arbitrary sets of coordinates in the homogeneous, empty time of history.

Javanese tradition does things differently. Dates are given their own beauty and significance with a device called a chronogram, which is a method for encoding a year numeral as a sequence of symbols. Each digit is conventionally associated with some set of verbal or pictorial symbols. To create a chronogram, you choose a symbol for each digit of the year and string them together. For example, the year 1980 can be encoded in the Javanese phrase muluk ngesthi ngambar ing budaya, which means ‘elevate and reflect upon the fragrance of culture’. This rather pretentious chronogram adorns the entrance to the main museum of the Beautiful Indonesia in Miniature Park, a pet project of the late dictator’s wife.

The symbolic correspondences are:

Javanese chronograms are usually written in this backwards manner, but not always. For each digit there are a whole range of symbols to choose from, so I could write a more down-to-earth chronogram for the same year: ilang (0) ula (8) ing song (9) bumi (1), ‘the snake vanished into a hole in the ground’.

The correspondences between digit and symbol tend to fall into semantic groups. For example, words for ‘ear’, ‘eye’ and ‘hand’ always encode the digit 2, since such things usually come in pairs. Some correspondences are less obvious because they are based on Indian cultural images that were borrowed into Javanese literature: words to do with fire symbolise 3 (associated with Indic fire rituals), references to the sea or water mean 4 (since Indian geographies recognised only four oceans), and anything about horses represents 7 (because in Sanskrit texts, the sun god’s chariot is driven by seven horses).

Expressing the year as a chronogram imparts a special quality to that interval of time. Sometimes the symbols are chosen simply to make the date memorable, thus reducing the mental burden for the historians who composed them. This mnemonic advantage could be the reason why the earliest historical texts from Java are in the form of long chronogram lists.

The particular symbols used in a chronogram are often selected to express the significance of events in the corresponding year. For example, many texts record that the fall of the great Hindu-Buddhist state of Majapahit occurred in 1400 of the Shaka era (equivalent to the year starting from March 1478 CE). The catastrophe resulting from the disappearance of Majapahit’s authority is described in the emotive chronogram: sirna (0) ilang (0) kerta (4) ning bumi (1), ‘the well-being of the world was completely destroyed’. The apocalyptic quality of the chronogram is strengthened by the fact that it represents a threshold year, which is associated in many cultures with destruction and chaos. Think of the medieval European belief that the Apocalypse would arrive in the year 1000, or our own panic about the Y2K bug.

But since chronograms consist of meaningful symbols, their emotional effect is best seen in their pictorial forms. Pictorial chronograms were used to commemorate the inauguration of temples, mosques and palaces throughout Java. A famous instance is in the Yogyakarta palace, which was established in 1682 of the Javanese era (1756 CE) as a breakaway court of the Surakarta kingdom of central Java. A gate to the palace yard is ornamented by a pair of snakes with their tails entwined.

This pictorial chronogram can be verbalised as dwi (2) naga (8) rasa (6) tunggal (1), ‘two snakes with the same feeling’, a clear allegory for the Yogyakarta and Surakarta courts. These snakes shared the same feeling of anxiety about the partition of the kingdom, because Javanese political ideology could not accommodate the idea of two legitimate kings in coexistence. The chronogram illustrates the ambivalence of this historical moment: the joy of founding a new palace, soured by the disappointment of having to divide the realm. Its placement at the entrace to the yard allows anyone entering the palace to share in this emotion, as long as they can recognise that the sculpture is an embellishment not just of the palace’s gate, but of its history as well.

Chronograms create a sort of time that is completely unlike the empty time that Benjamin condemned. By encoding digits as symbols, each year can be given its own character and life. The complexity of the symbolic system gives the historian or the architect a wonderful freedom in commemorating the past through illustration. Rather than clinically positioning each historical moment in the featureless grid of calendar time, a skilled chronogram artist can fully realise the affective power of that moment. Or at the very least, they may help students to more easily memorise crucial dates in preparation for their Indonesian history exams. 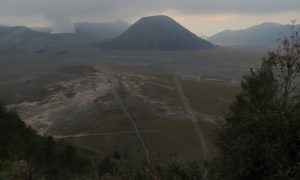 Mount Bromo shows its darker side at this haunting Hindu festival.