10.45 PM. This referendum is a lot closer than most people, including myself, expected. Given that there was no real choice the size of the no vote is striking. Here is a graph of the results based on the votes of about 20% of those registered to vote. The overall yes vote is running at 57.6% and the no vote at 40.5%. That’s enough for me for tonight! (PS – with 23% counted the yes vote has dipped slightly to57.1%. There seems to have been a bit of a downward trend in the yes vote for about an hour. I wonder if this reflects votes from more remote booths coming in. PPS – with much more up-to-date figures the Election Commission has the yes vote on 57.52%. Their figures indicate that the votes of 44% of those registered to vote have been counted.) 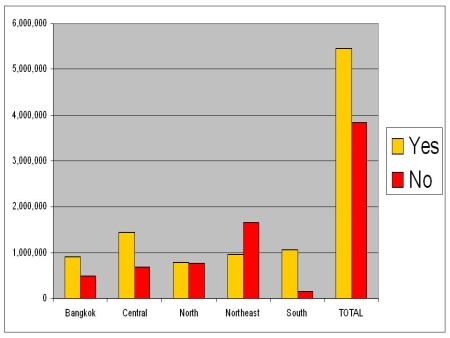 9.50 PM. Ex-PM Banharn talks about the likelihood of a future coalition government.

9.30 PM (Canberra time). Head of the Democrat-except-when-you-can’t-win-an-election-and-then-a-coup-is-OK Party, Abhisit, interviewed. He wants to look forward. The referendum has been conducted well and the result has been accepted well. He will have to campaign hard. One commentator comments that the vote does not so much reflect acceptance of the constitution as a desire for political change.

9.15 PM. Chaturon Chaisaeng (in a red shirt) has thanked those who voted against the draft constitution. He accuses the government of blocking the no campaign and creating the impression that if the constitution did not pass there would be no election. But he and his colleagues will accept the result. General Sonthi interviewed. He just wants things to return to normal. Everyone should accept the result. He said that December is the month of “fathers’ day” [the kings birthday]. And there will be celebrations. Setting the date for the election is a matter for the Election Commission. He did not state clearly when there will be an election. He does not want to answer if he will be going into politics or not. Come back and ask him after 30 September. Sonthi thanks the people for accepting the draft constitution. The country will be in good order. We will get good politicians for sure!

8.20 PM. The overall count has about a 60% yes vote. But there are striking regional differences. In the south there is a 90% yes vote. In the north the count is about equal. But in the northeast there is a 60% no vote. Given the size of the population in Isan this could make the final vote close.

7.40 PM. Channel 11 reports that with about 2.5% of the vote counted the yes vote is 57.56%. Surayud has appeared on television to thank people for voting.

7.05 PM (Canberra time) Voters in Thailand have just finished casting their votes in the country’s first constitutional referendum. From my quick perusal of the news it seems that the voting has gone smoothly. There have been reports of protests in Chachoengsao, which should come as no surprise to regular New Mandala readers. In some provinces protesting voters who tore up ballot papers were arrested. There have also been claims of (shock! horror!) gambling on the referendum outcome in Isan. Those northeasterners just don’t know how to behave. Perhaps most important is the report that General Sonthi, after casting his vote, refused to rule out future military action against the constitution. As we know, according to the tenets of sufficiency democracy, voters’ decisions are only valued when, as in the case of this referendum, they have no meaningful choice. An ABAC survey predicts a 70:30 yes vote.