The cost of clean politics

Corruption has become a central issue in Thai politics in recent times. To many, it is seen as the cause of all that has gone wrong in the country. The consideration of the 2.2-trillion-baht loan bill in late August 2013 by the House of Representatives is likely to bring about further discussions on the topic. For now, this piece aims at unveiling alternative insights about corruption in Thailand. It also points to the need to reconsider the Thai vision of “clean politics”: the politics that is free of corruption.

The 2.2-trillion-baht loan bill proposes major development of transport infrastructure in Thailand. While the proposal to build the high-speed rail network may seem to be the highlight of the bill, the bill also includes proposals for improvements in other areas such as the metro-network in Bangkok and the double-tracked railway around the country.

On the one hand, the proposal could be seen as a political strategy of this Pheua Thai government. It is not too dissimilar to the previously used rhetoric of “mega-projects”, which was mobilised so often during the Thaksin years. Yet, it is also difficult to deny that there is a real need for a major improvement in Thailand’s transportation infrastructure. Bangkok is lagging far behind comparable cities in the world in terms of the availability and quality of its public transportation. The Thai rail system is in such a condition that most Thai travelers try to avoid using it. These are realities that Thais themselves are facing in their everyday life. Hence, the bill has the potential to lead to a big political success for Pheua Thai. If the associated promises are actualised, it could allow the Pheua Thai government to establish a very firm position in Thailand’s political landscape for many years to come. 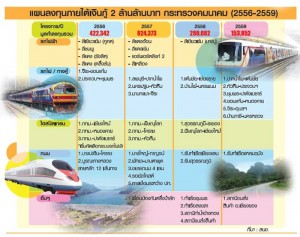 However, the 2.2-trillion-baht loan bill could face a crucial challenge from those who question it from an anti-corruption perspective. Due to the large sum of money and construction work involved, suspicions are widespread among the urban-middle class тФА particularly ones with anti-Thaksin sentiments тФА that the bill will also lead to large-scale corruption. Such a viewpoint has opened ways for further objections to the bill, and may even lead to the mobilisation of legal means to stall it.

If the 2.2-trillion-baht loan bill stumbles, then a crucial question may be raised: could the potential benefits from the 2.2-trillion-baht loan bill be seen as an example of the benefits that have to be forgone in order to satisfy the Thai vision of clean politics? Is the anti-corruption effort actually going to produce a major cost for Thailand, particularly in terms of the lost opportunities for government’s roles in building infrastructure?

Admittedly, the posing of this question seems too simplistic. Logically, there is no need for the reduction of corruption to come at the cost of rejecting the government’s expenditure: the two actions can be done at the same time without having to choose one over the other. However, I would like to argue that this is not necessarily true in the case of Thailand. To me, there seems to be elements in the Thai vision of “clean politics” that make it difficult for anti-corruption to be reconciled with the reality of Thai politics and government practices.

First, discussions of “clean politics” in Thailand tend to portray the matter merely in black and white. Corrupted practices are simply immoral and should always be acted against. This results in the lack of realistic discussion of practices of corruption. The discussion is rarely made from the perspective of those who live in a society where many forms and variations of corruption are in fact engrained in the culture. Arguably, corruption in Thailand stems from everyday practices that all Thais have been brought up with, and many may even accept the pragmatic need to engage with some corruption-related practices. Yet, most discussions on corruption in Thailand seem to be detached from this fact.

Second, and related to the previous point, corruption in Thailand is seen too much as directly associated with the individuals’ moral attributes. This leads many Thais to portray all politicians as people with low morality and high tendency to corruption. The demand for clean politics, therefore, tends to be combined with a prejudice that most politicians are “immoral people” who should always be opposed. Very little has been asked as to whether politicians really possess worse morality than the average Thais; or are they simply being observed more closely than others.

Finally, there is also an irony here. While the need to promote the importance of clean politics is continually being stressed in Thailand, the belief that anyone can fulfill the demand of the vision is at the same time fading. If there is anything that the Thais have learned through its political problems during the past decade, it is likely to be that the “extra-democratic power” such as the military has the potential to be equally, if not more, corrupt than elected politicians. To this end, what really needs to be reconsidered is the Thai vision of “clean politics” itself. Yet, in what ways should it be reconsidered? I still have no answer to this question.

Thorn Pitidol is a Thai academic at Thammasat University