The Devil’s Discus – in Thai 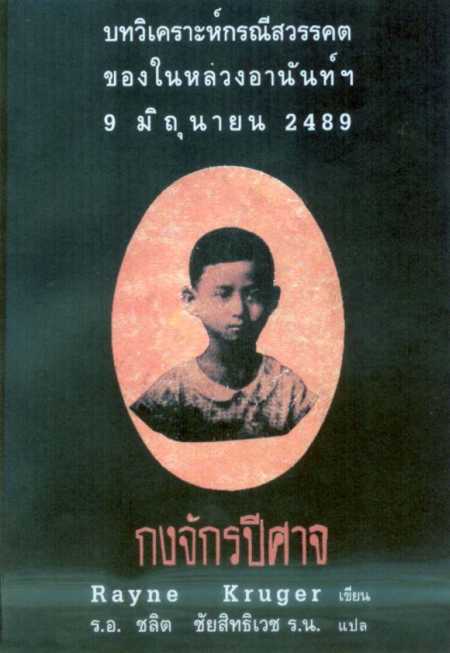 I was recently given a digital copy of the Thai translation of the Devil’s Discus by Rayne Kruger. The translation (р╕Бр╕Зр╕Ир╕▒р╕Бр╕гр╕Ыр╕╡р╕ир╕▓р╕И) was undertaken by Chalit Chaisithiwet and the publication, according to the back cover, was arranged by the “History Students Association.” I can’t see any date of publication on the version I have been sent. My brief research has uncovered various dates – all of them in the 1970s.

According to Wikipedia, the translator, Chalit Chaisithiwet, was the brother of Vacharachai Chaisithiwet who was aide-de-camp to former prime-minister Pridi Banomyong:

Pridi was brought under suspicion of regicide in the death of King Ananda by his chief political rival, strongman military Prime Minister Plaek Pibulsonggram and was forced to flee into exile with his chief aide-de-camp (and Ananda’s), Vacharachai Chaisittiwet. Vacharachai’s brother became the Thai translator of The Devil’s Discus in an attempt to clear his name.

This translation appears to have met with a more liberal fate than the original English-language version. Whereas the English-language original (published in 1964) was banned immediately in Thailand, the Thai translation was only banned in 2006. Perhaps this backs up the point suggested by Craig Reynolds at the recent panel discussion on The King Never Smiles that Thai language discussions of the monarchy may be less offensive to the authorities than those by English-language authors.

But, of course, official bans are not the only way to suppress un-welcome material, and I have been told that the Thai translation of the Devil’s Discus is hard to find in libraries throughout Thailand. Can any New Mandala readers confirm this?

I have received some interesting background on this translation from CJ Hinke of Freedom Against Censorship in Thailand:

Devil’s Discus only saw one printing in English (Cassell, London, 1964) and one printing in Japanese. The Thai translation was published by Political Science students at Thammasat University in 1977. I have only seen the black cover variant and all copies I have examined are missing the first 16 pages. There is a second cover variant in yellow, quite rare!

Kruger’s UK obituaries carried an interesting anecdote. They state that, following publication of the Thai translation, the Thai publishing house was burned to the ground. I’m still digging on this but it appears to be mythical!

The English edition saw only one printing as it was banned in the Royal Gazette in its year of publication! The Thai translation was not banned until 2006, 30 years after its publication. Someone thought it a bright idea to sell its photocopies at Sondhi’s PAD rallies at Lumpini Park. The police followed them home and it was banned shortly after.

All known English copies of Devil’s Discus in Thailand were ordered destroyed. The Siam Society resisted with the support of Princess Galyani but it is still in restricted circulation. Some university libraries have copies in rare books.

(Thanks to FACT for this information! You can sign FACT’s petition against censorship in Thailand here and here.)

If any other New Mandala readers have information or opinions about this translation, please post your comments here. In particular, does anyone know why copies of the Thai-language version (including the copy I have been given) start at page 17?

[UPDATE 3 June 2008: Ajarn Somsak Jeamteerasakul has kindly provided this image of the cover of р╕Бр╕Зр╕Ир╕▒р╕Бр╕гр╕Ыр╕╡р╕ир╕▓р╕И. Somsak provides has some observations about the cover in comment 7 below.

Here is a side-by-side comparision with the cover image I provide above: