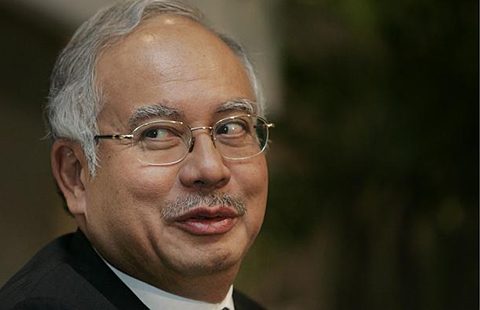 The law in Malaysia is an ass As corruption scandals plague the PM, this is the moment Malaysians should openly demand justice in their country – something the law and judiciary won’t give them.

When on 8 July defence minister Hishamuddin Hussein declared that no-one in Malaysia is “above the law”, many Malaysians would have either shrieked in horror or laughed till their stomachs hurt.

But nobody would have shuddered at the idea that Hishamuddin would shamelessly tell another bald-faced lie or trumpet yet another cockamamie from his loft.

Coming from a regime renowned for hiring congenital liars and compulsive shysters since 1969 – although one could also revisit some wild porkies told in the 1950s and 60s – Hishamuddin’s attempt at grabbing the political middle-ground, to be seen as some sort of conciliatory ‘statesman’-like figure, flatly slammed back into his face.

Most Malaysians will have experienced the crudely thwarting ability of the 58-year-old ruling UMNO-Barisan Nasional regime to make the country’s laws bendable. So pliant are they, that today Malaysia’s laws are inherently farcical. Malaysian laws, in general and specific terms, are an ass.

Malaysian laws serve UMNO-BN’s narrow, immediate, ideo-political and economic interests. Malaysians understand there is no such things as equality before the law, let alone justice in this increasingly pariah, Third World state with grand pretensions of becoming an “advanced nation” by 2020.

Najib Razak, Hishamuddin’s cousin and boss, Malaysia’s prime minister and finance minister to boot, is directly implicated in a monstrous corruption scandal, the likes of which Malaysians have never seen. Some US $700m is alleged to have been transferred to several bank accounts in his name, while 2 million ringgit has been allegedly deposited into his wife’s bank account. It is difficult to see Najib extricating himself with comprehensive inculpability, much less virtuousness, from the mounting shambles around his integrity and political legitimacy.

This is precisely the moment Malaysians should openly demand justice in their country along principles of ‘justice as fairness’. It will not happen. Hishamuddin, an UMNO vice-president who, in 2005, while clutching the traditional Malay keris (short-sword), threatened to spill non Malay-Muslim blood in the name of Malay superiority, knows this well. So, too, Malaysia’s Bar Council, which has remained peculiarly quiet. Not a squeak.

To all intents and purposes, the entire Malaysian cabinet, including Hishamuddin, would have been aware that the monies transferred into Najib’s personal bank accounts – exposed by The Wall Street Journal on 2 July – had been used to rig the 2013 elections and yet again defraud Malaysians of their right to regime change. That outcome is now history. But it is another ugly chapter in this country’s growing repulsiveness when added to its penchant to also practice racism and bigotry. No court in Malaysia will sit in judgment on these matters. If and when it does, judgment almost always never comes in a hurry, if at all.

Islamic groups – financed by taxpayers and ideologically supported by UMNO, an exclusively Malay-Muslim political party – engage in body and identity snatching: recurring episodes of forced, surreptitious and illegal conversions of non-Muslims to Islam.

Their blackguard actions are soiled in the politics of Islamising the country for purely desperate politically reasons. The greater the Muslim base of Malaysia’s 30 million population, the better the chance of the rightwing UMNO continuing to rule Malaysia under false pretenses.

Not that the regime-pliant judiciary would dare preside against the illegalities of the 2013 general elections that clearly depicted UMNO’s fraud, led by Najib. Since 2014, Malaysia’s Federal and Appeals courts have deferred the decision to declare the 2013 poll null and void to the Registrar of Societies. ROS is answerable only to the home minister, a draconian character. In historical terms ROS augments UMNO’s autocratic rule and electoral fraud alongside the regime’s handpicked Election Commission.

Ruling politicians are accorded the same treatment by Malaysia’s ‘laws’, and at a much higher level: they are effectively untouchable. Like all former Inspector-Generals of Police, the current IGP is not a public servant but a puppet of UMNO, whom he and his police force, debauchedly corrupt, protect, come hell or high water. It makes lighter work for Malaysia’s judges.

In his time as prime minister (1981-2003) Dr Mahathir did his darnedest to destroy the constitution and substantively reduce the position of Malaysia’s monarchs. They are today voiceless, powerless, and were happy to become a despotic class. To the extent that Mahathir for the most part hid behind his repressive laws and the malleable judiciary, Najib has been doing likewise in his bid to stifle popular dissent and the potential for mass revolt. Najib has learnt well from his mentor. Mahathir’s political cretins, in the Gramscian vernacular, have gotten away with some of the worst graft accusations, mostly via their business cronies. Najib and perennially bungling ministers and senior bureaucrats know they need never fear fronting a Malaysian judge. So much so, the rort has continued like an unbridled market for lecherous grubbiness.

Najib has never been before a judge for all the scandals that have erupted under his charge as either a minister in other portfolios, and as prime minister and finance minister since March 2009. His name continues to be linked to the cold-blooded murder of 28-year-old Altantunya Shaariibuu, the Mongolian model and translator in the scandalous Scorpene submarines deal when Najib was defense minister.

To be sure, Najib is most unlikely to be indicted, despite the fact that there is sufficient evidence to, at the very least, raise the possibility if not probability of corruption and electoral fraud. After all, laws in Malaysia are severely asymmetrical and deeply prejudiced. Malaysian laws serve to dispense immediate justice on behalf of its political masters, advance their self-interests as well as those of the filthy-rich class of Malaysians with direct political connections.

There is literally no dispensation or indeed chance of dispensation of credibly proper and full justice against UMNO-BN chieftains and or their business cronies regardless of the existence of irrefutable evidence of various illegalities in their depraved wealth accumulation.

This situation is not helped when the IGP refuses to investigate any of them but is happy to make chronically ill-thought political judgments on behalf of his puppet masters. His investigatory judgments based in law are non-existent.

It is also not helped by the current attorney-general, whose job description is scarcely dissimilar to the IGP’s; the foremost protection of the odiously corrupt, deceitful and treacherous UMNO-BN regime.

UMNO ministers have crawled out of their hiding holes to state and restate with hyena-like frequency that Najib is not legally bound to step down, even as various investigations into his alleged corruption proceed apace. Or that he need not step down at all because he has not broken the law.

The second claim is true – so far, and up to a point. The first one, though, is born of heightened scandalous stupidity. At stake are the names of the offices of prime minister and finance minister and of the country (already damaged goods).

But never mind, just as long as patron Najib, UMNO-BN politicians and their cronies and nepotists remain above Malaysia’s spineless laws. They need not worry in any case: there are no laws in Malaysia to speak of in the first place.