The Lost Leadership of Timor Leste 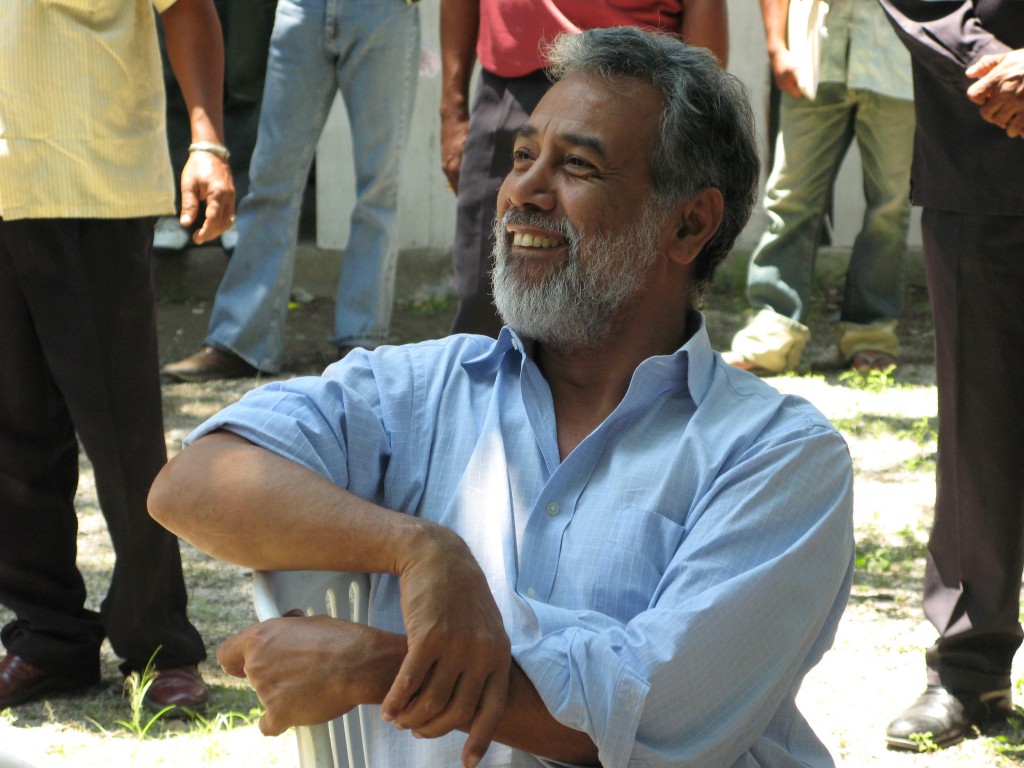 Will Xanana Gusmao ever step down? Photo: Maj Nygaard-Christensen

Earlier this year, Prime Minister Xanana Gusm├гo’s reported his intention to resign in September. Well, September has been and gone and Gusm├гo remains Prime Minister.

A recent IPAC report summarised the impediments to a transition from Gusm├гo-ian power and pointed to the way in which past alliances and rivalries play an important role in present politics. The report outlined a key threat to stability in the return of former guerrilla Mauk Moruk, who in 1984, challenged Gusm├гo’s leadership and, in 2013, challenged Gusm├гo’s leadership anew through allegations of authoritarianism. It was these critiques that triggered Gusm├гo’s announcement of a plan to step down. The report goes on to ask some very important questions about the other impediments to leadership, including the lack of a leadership replacement.

The report concludes that Gusm├гo’s departure and the replacement of the 1975 Generation by younger cadres “should help expand the political elite and make the country less prone to political problems rooted in feuds and rivalries of the distant past”. It rightly points out that any continuation of Gusm├гo’s role would postpone a real transition of leadership.

However, what kind of leadership is awaiting this transition? What’s their history? Are they really “less prone to political problems” any more than the Generation of ’75? What characterises the New Generation (Geracao Foun), as they describe themselves, of potential leaders in Timor-Leste?

The second reason lies in the failures of Generation 99 itself. Mainly the inability of Generation of ‘99 to imagine themselves as leaders and an inability to ‘capture the state’. This owes firstly to the power relationships that emerged during senior leaders and youth in the resistance movement in which compliance, rather than criticism was the modus operandi. And secondly, the political marginalisation they experienced after independence. Finally, the problem lies in the history of the Generation of ’99 itself.

The older generation of Portuguese-educated elite became known as the ‘Generation of ’75 for their role in the decolonization movement against Portugal in 1975. The most well-known members include former Prime Minister Mari bin Alkatiri, Jose Ramos Horta and Xanana Gusm├гo. Although Gusm├гo’s influence came later when he became leader of Falintil, he is still associated with the 1975-generation. The Portuguese-educated generation managed to ‘capture the state’ because they fit the international community desired model of easily recognizable and organised political parties, and were experienced leaders. The older generation pushed for Portuguese to be adopted as the country’s official language, thereby maximising their own purchase on the nation through the creation of a linguistic barrier.

By contrast, the members of the Generation of ’99, were defined by their role as activists in the clandestine movement for independence. They grew up under the Indonesian New Order and became fluent in its language and cultures of resistance. Upon independence, the Generation of ’99 expressed disappointment with the decision to prioritise Portuguese and felt it marginalised their own histories. Initially, they coalesced around the language issue.

As their marginalisation wore on however, their united front faded into the background. The Generation of ’75 dubbed them the ‘Supermi Generation’ for their apparent likeness to the iconic Indonesian brand of instant noodles, Supermi; limp and lacking the leadership characteristics of the Generation of ’75. Their exposure to Indonesia ‘tainted’ them and left with questionable loyalty to the nation of Timor-Leste.

The complexity of this position is easy to overlook, as the Generation of ’75 also forged positive state relations with Indonesia. Who has a problem with Indonesia? Nope, not us, Timor-Leste says looking over its shoulder.

Digging deeper, the nature of the post-colony has meant that the vestiges of what Indonesia represented: coloniser, invader, Asian, would not be forgotten but reformulated into the new nation-state politics of belonging and power. Within this framework, the Generation of ’99 have been diagnosed by its leaders, and populace, with a severe case of postcolonial ‘lack’. As noted in the IPAC report, “none of the political successors [to Xanana Gusm├гo] has the charisma or independent political base”.

But the reasons behind this also lie in the fact that the younger generation fail to imagine themselves as national leaders. The power relationships that developed between Timorese youth in the clandestine resistance actively suppressed critical thinking among youth leaders. During the clandestine movement, the erasure of difference for a single, unified voice was critical. Women’s voices in particular were silenced for fear that the message of unity in the face of Indonesian occupation would be forsaken. While few have openly spoken about the character of the resistance, those that do describe a top-down leadership style, with youth only allowed to act on direct orders of senior resistance leaders; Xanana Gusm├гo in particular. The resistance thereby produced a generation of politically engaged youth, but opened few possibilities for independent political decision making and leadership.

This meant that Gusm├гo was able to capitalise and centralise his power. His immense popularity and beliefs (that he also propagated) about his magical superpowers (to turn himself into a white dog to evade captors, among one of them) contributed to the power relations that developed between senior and junior leaders at the time. His authority continues to evoke such awe that even in private conversations, people are hesitant to name him directly when they are being critical. The reverence with which Xanana Gusm├гo is held fuel a kind of self-censorship of the imagination, wherein the Generation of ‘99 fail to imagine themselves as leaders.

Critics of these generational power relations are far and few between. Those who vent this viewpoint were kept out of the inner circle of the senior political power circle and have not been invited in. Those in receipt of high political positions have largely remained silent on the past and their role in the clandestine movement, as if now they are recovering their ‘debt’.

Clandestine politics in Indonesia has thereby been kept out of debates about the transition to power. Although the need for unity was prioritised, splits began to form as soon as clandestine organisations were set up. These divisions emerged according to the geographical locations of centres of clandestine resistance activities in Indonesia, and the ways in which activist operations were run.

Bali and Malang-based students thus took an institutionalised approach to their activism by establishing RENETIL, the East Timorese Students National Resistance. This changed by 1991 when RENETIL operations had moved to Yogyakarta because most of the Bali and Malang-based leaders had been arrested. Yogyakarta-based students had become more radical due to their proximity to the Indonesian-pro-democracy front. Others didn’t agree with their stance. Once RENETIL’s secretary general Fernando de Araujo ‘Lasama’, was released from jail, RENETIL’s operations slowly moved to Jakarta.

The Yogyakarta and Surabaya-based students were often on the front-lines of demonstrations in Jakarta, while the Jakarta-based students became much closer to the resistance leaders in Cipinang prison. Some considered the Jakarta-based group took a more ‘intellectual’ approach to the clandestine operation and together with the Yogya-based group, agitated for critical discussion about their role after independence. On a few occasions, they took the initiative to hold demonstrations counter to Gusm├гo’s commands.

After independence, there were initial suggestions that RENETIL would transform into a political party. Former Bali and Malang-based students went into politics. For instance, Lasama and Mariano Sabino (the head of IMPETTU, a Timor students organisation allowed by the Indonesian government) went on form to Partido Democratico and hold senior positions in the government, but they have no real popular base of support. Former Yogyakarta and Jakarta-based students went into civil society groups. The recent amendment to the media law that has serious restrictions to press freedom was most vocally criticized by this group. Understanding the history of these divisions is also a way of understanding post-independence politics and the constitution of civil society.

An interesting turn in post-independence politics has been the self-reflection of these former students who have opened up on a discussion of feeling ‘tricked’ by the leaders of the clandestine movement who captured their youthful energies but were unable to be recompensed after independence.

Now splits and re-splinters are the political norm, among senior as well as younger leaders. The 2006 socio-political and security crisis which saw the disintegration of the police also signalled a major schism within the civil society. These splinters, re-splinters – and reunions – are a major characteristic of the Timorese political climate.

If and when Gusm├гo decides to withdraw from leadership, will he continue in a senior ministerial role or in a proposed advisory council broadly referred to as the Conselho dos Katuas (Council of [Male] Elders)? The latter option, consisting of a council with Ramos-Horta, Alkatiri Lu Olo, Carrascalao and Lere in (according to Ramos-Horta) “conducting supervision and monitoring of the behaviour of the new generation of leaders in order to safeguard the national interest” (Tempo Semanal Online 2013), is widely cited in Timor-Leste as an option for future politics.

Only one thing is clear: Timor’s guerilla history is just as heavy a burden upon the young generation as it has been on its older generation. The country’s next leaders may not necessarily be any less “prone to political problems rooted in feuds and rivalries of the distant past”. They have also the added disadvantage of struggling to gain legitimacy in a political environment where senior leaders continue to be associated with political authority.

What they do have is a strong tradition of activism and democracy-building, first through their involvement in the clandestine movement and with Indonesia’s pro-democracy movement and later in the independent nation’s civil society organisations. Capitalising on this legacy of democratic participation and activism might in time benefit their transition into a new generation of leadership in Timor-Leste.

The authors thank Hugo Fernandez for his critical insights.

Angie Bexley is a Research Associate in Anthropology, School of Culture, History and Language, ANU College of Asia Pacific

Maj Nygaard-Christensen is a postdoctoral researcher at the Department of Culture and Society, Aarhus University.