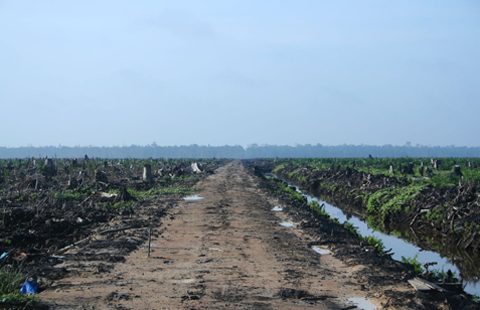 By the time the fifth and final presidential debate aired on Saturday, many Indonesians may have already made up their minds as to who they want as their next president. This debate on food, energy and the environment, however, offered interesting insights on some of the critical challenges faced by this resource-rich country and how each candidate plans to address them.

In fact, the question of managing Indonesia’s resources including land and water are fundamental. We were reminded of this in the first verse of the national anthem sung at the beginning of the debate: ‘Indonesia, tanah airku’. The phrase ‘tanah airku’ (my homeland) consist of the words ‘tanah’ (land) and ‘air’ (water).

Addressing environmental and natural resource management challenges, therefore, is not only required to sustain Indonesia’s development and improve the welfare of its population, but should also be perceived as patriotic.

In this final debate, presidential candidates tried to convince voters that they grasped relevant concepts surrounding agriculture development, energy development and environmental management, as well as natural resource management in general. Both candidates, however, shied away from answering some key critical questions.

In stating their vision and mission, Prabowo Subianto and Hatta Rajasa (PSHR) acknowledged there is a nexus between food, energy and the environment. PSHR articulated major challenges, including global climate change, and mentioned key concepts and solutions, such as sustainable development, nature conservation and renewable energy development.

In contrast, Joko Widodo and Jusuf Kalla (JWJK) emphasised the huge challenges Indonesia has faced in the last decade, such as food shortage and imports, and the crises in energy and the environment. JWJK raised detailed strategies to address such challenges, among others, by increasing agriculture productivity, converting oil use to gas, increasing the intake of renewable energy, and restoring two million hectares of degraded forests.

At this point, both candidates demonstrated that they understood the issues.

But they left out entirely one of the underlying causes of the issues, which is Indonesia’s weak governance of natural resource management.

The current governing institutional framework that oversees agriculture, energy and the environment in this country has created overlapping policies and programs. It has hindered any substantive progress needed to reach sustainable development goals.

As many reports and studies have revealed, the current governance of natural resource management in Indonesia – exacerbated by a lack of law enforcement, unclear systems of land tenure, insufficient economic incentives, and a lack of capacity and human resources – is the greatest obstacle to delivering development targets. This is what needs to be reformed.

Moreover, actors or sectors involved in the present governance system – namely forestry, agriculture, mining and infrastructure – are so diverse. It seems that without a clear institutional set up and leadership, coordination among these entities cannot be formed and the development goals may not be achieved.

For both candidates, it would have been better if any particular policy, strategy or solution formulated takes into account the governance problems and subsequently proposes fundamental reforms to the situation.

Avoiding concrete and comprehensive discussion about may lead to further doubt about candidates’ commitment to seriously address agriculture, energy and environmental challenges.

In addition to the governance issue, another key question that both candidates seem to struggle with is answering questions about fossil fuel and energy subsidies.

As reported in Indonesia-Investment, the government allocated IDR300 trillion (US$26.3 billion) on energy subsidies in 2013 (mostly on fuels and electricity). This year they will spend at least IDR282 trillion (US$24.7 billion).

High energy subsidies hinder Indonesia’s sector development, such as in education and healthcare. Worse, they inhibit the development of indigenous renewable energy sources such as geothermal, biomass, bioenergy and micro-hydro.

Both candidates made some noises about increasing the intake of renewable energy sources. But in failing to elaborate on a clear strategy to reduce fuel and electricity subsidies, however, both candidates could be seen as contradicting their policy platforms.

The failure of the two candidates to have mentioned even a ballpark figure for an energy subsidies cut was likely due to the fact that both candidates did not want to scare potential voters. The price of fuel is a sensitive issue to many Indonesians – both rich and poor.

But by not mentioning the size of the expected cut at all, Indonesians cannot predict whether the next government will have the fiscal space, capacity and sustainability to support the country’s growing development, especially if Indonesia would like to compete against other economic superpowers.

Furthermore, without mentioning any number for energy subsidies cut, there is also doubt whether Indonesia can contribute further to climate change mitigation.

Climate change mitigation and adaptation were in fact only briefly mentioned in the debate, without further elaboration.

Prabowo Subianto and Hatta Rajasa used an example of extreme weather, which has impacted the country’s agriculture sector, without explaining any strategy for climate change adaptation in this sector. Joko Widodo and Jusuf Kalla tried to explain REDD (reducing emissions from deforestation and forest degradation) without mentioning any concrete steps to support and refine it.

To date, greenhouse gas (GHG) emissions come mainly from forest and land use sectors, but emissions coming from energy and transport sectors are growing.

The cheap price of subsidised oil and dramatic increases in the use of other fossil fuels mean that these fuels will continue to dominate the future national energy mix. As a result, such situation will lead to significant GHG emissions and continue to contribute to climate change.

In general, the fifth and final debate may have at least helped voters to further understand both candidates’ attempts in addressing agriculture, energy and environmental challenges. This may have convinced the already decided voters and swung the rest.

In addition, the debate reveals that Indonesia faces a herculean task to balance economic development, social welfare and environmental protection. Even after the debate concluded, there remain key questions unanswered.

Now, it is up to voters to elect their leader and more importantly to further ask their commitment as president to policies towards a prosperous and sustainable Indonesia.