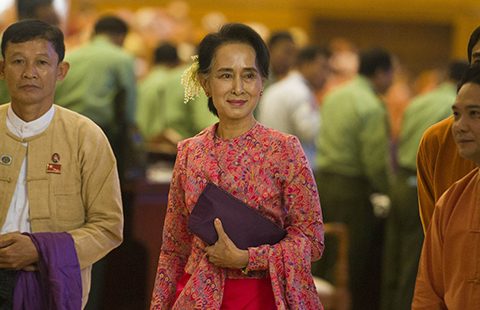 This column was published in The Myanmar Times on Monday, 1 February 2016

All the speculation about who will hold the nation’s top jobs should come to an end this month. With newly elected legislators taking their Nay Pyi Taw seats, the specifics of further compromises between the National League for Democracy and the military will become clearer.

Before long, the speakers will pick up their gavels for the first time, the president and vice presidents will take up their palatial residences, and a clutch of new ministers will try to get to grips with their responsibilities. Nay Pyi Taw will hum with the fresh energy of a government with much to do.

It will be easy to get caught up in the surge of enthusiasm; the story of the NLD’s success is one for the ages. But the busy months since the November 2015 election have already revealed a lot that will temper expectations.

For a start, there is the degree of difficulty. Since its election triumph, the NLD has been quietly getting ready for power. There is no point in sugar-coating the task. They are finding it tough.

Unravelling decades of military rule was always going to prove a frustrating and inconsistent process. Nobody could pretend that there was a simple or fast way of re-engineering the political machinery to reflect the people’s will.

Last year, I wrote that the party of democratic struggle “needs to lift the standard” if it hopes to create a long-term platform for Myanmar’s success. For now, plenty of people are prepared to make excuses on its behalf.

Mistakes are inevitable. Old habits of blaming the military for every problem will be hard to break. Where possible, the NLD should try to learn from its missteps.

Yet one of the major issues confronting the NLD will be harder to explain away.

The irony is that even at the best of times the NLD is far from a model of transparency or democratic management. The authoritarian instinct starts at the top, with Daw Aung San Suu Kyi’s iron grip on decision-making.

For the past quarter-century, she struggled, peacefully and with immense resolve, against the army’s dominance. There is no question about her courage, commitment or charisma.

The last five years have also required some adjustments in her personal approach, especially in Naypyitaw where she has got up close with senior military figures.

What has not changed is her requirement for intense personal loyalty and her need to remain the final authority. The NLD is her vehicle and, as its revolutionary leader, she makes no apologies for taking charge.

Whether or not this is good for Myanmar’s long-term development is not on the agenda for discussion. In any case, there is no short-term alternative. The hard electoral reality is that by cultivating such an intense following and an unrivalled personal aura, Daw Aung San Suu Kyi has given the people something to believe in.

Under orders from the top, the NLD has been reluctant to share details about its plans, even with the voters who elected the party. Control of the appointment strategy has been severe, even paranoid. This cone of silence isn’t exactly a departure from old-style dictatorial practice.

Then when aspects of reputed NLD plans have dribbled into the press, the party has sought to crack down on speculation, seemingly unable to comprehend the extra interest that its secrecy creates.

A further problem is that almost nobody in the top party echelon has direct experience governing. The Central Executive Committee, stacked with veterans of the struggle for democracy, has a well-earned reputation for gerontocracy.

One of the only senior NLD figures with a track record of running a major component of government activity is U Tin Oo. A long-time fixture at the party’s high table, he was the socialist regime’s minister of defence and commander-in-chief until purged from those positions in March 1976, almost 40 years ago.

The old general, decorated for gallantry in battles against the Kuomintang, is still talked about as a potential presidential proxy if Daw Aung San Suu Kyi remains excluded from that high office. It would be a remarkable final chapter in U Tin Oo’s incredible career, but also a further indication of what ails the NLD.

For its future viability, the party will benefit from a historic injection of youthful vigour among its decision-making group. Party stalwarts have resisted this revitalisation, while deference to elders makes it hard for the young guns to have their voices heard.

Among the newly elected rank-and-file – who have already been told that they are expected to make up the numbers – the party’s strict discipline will be hard to maintain. Under these conditions, new problems will emerge.

What this analysis implies is that in its elitist culture, the NLD keeps to familiar patterns of hierarchy and subservience. With time, this might change. For now, it would be good to see strong signals that the party’s mandate will mean more democracy in Nay Pyi Taw.

Nicholas Farrelly is Director of the Myanmar Research Centre at Australian National University and the co-founder of New Mandala.