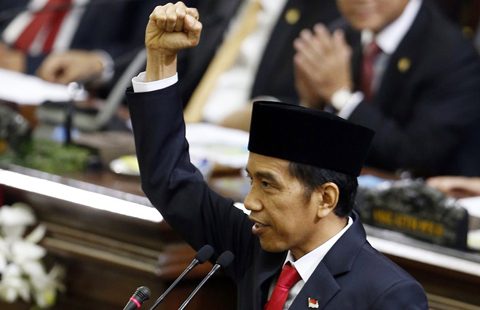 The perils of popularity A Jokowi presidency is a win for Indonesia’s democracy. But Indonesia got lucky by having Jokowi in the race, writes Liam Gammon.

During his successful Governor of Jakarta election campaign in 2012, Joko Widodo (or Jokowi) liked to tell a story.

He would recall how, shortly after being elected mayor of the small Java city of Solo in 2005, top public servants mistook him for a city hall aide. He delighted in recounting the surprise on the bureaucrats’ faces when informed that the lanky, self-effacing former furniture merchant was, in fact, their new boss.

You have to admit that at first glance, the man Indonesians chose as their seventh president in July does not look like your typical politician.

On the campaign trail, his stump speech consisted of little more than self-deprecating jokes and indignant rebuttals of smears made by opponents. He was inarticulate on television, his lack of expertise in macroeconomics and foreign policy always obvious. As one observer commented, he looked like he was running for mayor of a country town all over again.

The impression that Jokowi was unready for the presidency, along with the aforementioned smear campaigns about his religious background, took a terrible toll on his popularity during the presidential campaign. He shed 30 percentage points in the polls in the months leading up to voting day. In the end, however, for every voter who looked at him and decided he wasn’t presidential material, at least one other saw in him an honest everyman who looked and spoke like them.

It is difficult to overstate how important it is for Indonesia’s democratic development that Joko Widodo was elected president. July’s election is not important only because of who won, but because of who lost.

His opponent was Prabowo Subianto, a hot-tempered Soeharto-era military commander who made it into the innermost circle of the old regime by marrying the dictator’s daughter.

After the New Order regime fell in 1998, Prabowo temporarily left Indonesia in disgrace after being accused of the kidnap and torture of activists. But he worked for years in preparation for the 2014 polls to position himself as a champion of pro-poor policies and rapid economic development with a nationalist flavour, shrewdly staying in opposition as two-time president Susilo Bambang Yudhoyono’s popularity declined.

On top of populist rants about the foreign theft of Indonesia’s wealth, Prabowo’s authoritarian bent came to the fore during the campaign.

Observers discovered a commitment in his Gerindra party’s largely-ignored manifesto to return to Indonesia’s dictator-friendly 1945 constitution. Prabowo openly mused about the appropriateness of direct elections for Indonesia. His behaviour after the election, which has included alleging a vast conspiracy to strip the presidency from him, speaks to his readiness to bully and delegitimise independent institutions that don’t give him what he wants.

Despite justified relief that Prabowo lost, that the election was so dominated by these two men hints at deeper realities thinly papering over the vulnerability of Indonesian democracy.

As the first of a generation of reformist local politicians to turn success in the regions into national popularity, Jokowi’s career is proof that somebody who isn’t ‘part of the club’, even one reliant on a relatively underfunded and poorly organised political machine, can succeed in Indonesian politics. In one sense this is to be welcomed, given how monotonous and insular the establishment has remained after the fall of Soeharto.

But Indonesia got lucky by having Jokowi in the race. Prabowo still came too close to the presidency for comfort. What is most remarkable is not that Indonesia experienced an election in which the democratic consensus was at stake, but that it did so with such nonchalance. Inside Indonesia, the election was not typically framed as a referendum on a more authoritarian political future by the media or by establishment figures.

What remains a worry is the prospect that, at a time of economic or political crisis, voters may turn to populist leaders who combine the outsider status of Jokowi with an anti-system agenda more dangerous than Prabowo’s vague appeals to Soeharto-era nostalgia–a combination which has derailed democratic consolidation in other countries in recent decades.

Joko Widodo may be a breath of fresh air.

But as long as Indonesian politics is dominated by charismatic personalities rather than healthy political parties which maintain strong links to social bases, there is no reason to assume that Indonesian democracy is safe from a populist challenge far less benign than that which made Joko Widodo president.

Liam Gammon is a PhD researcher at the Department of Political and Social Change in the ANU College of Asia and the Pacific. This article will also appear in the next edition of ANU Reporter.