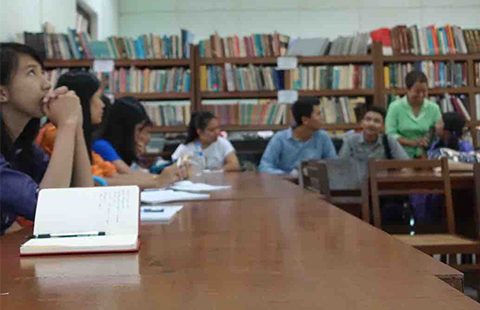 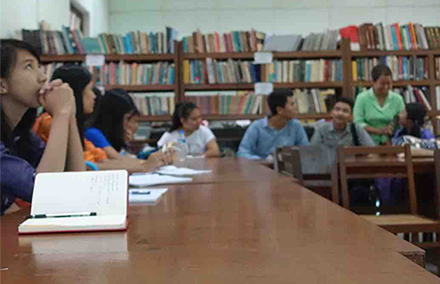 Students from the University of Yangon. Photo by Olivia Cable.

Will Myanmar’s people be key to a successful transition?

“Are we still under authoritarian rule, or are we really in transition?”

That’s what one student at the University of Yangon’s Department of International Relations asked Larry Diamond, a scholar widely known for his work on regime change and democratic development.

Diamond was at the university to speak about challenges for the 8 November election, and chiefly the importance of a constitutional election. With their own reservations about the elections, one student said:

We don’t think they’ll be constitutional. They’ll be more like the elections in 1990, where Aung San Suu Kyi won, but she didn’t become the leader. They weren’t free and fair.

With elections likely to neither be free nor fair, Diamond emphasised that Myanmar’s people are the key for a successful transition. They need to have the opportunity to balance their ideas between each other and the government.

For a democratic regime to prosper, civic cultures, tolerance and the will to negotiate differences is essential. Yet this is also where the danger lies. If the government and civil society cannot find a middle ground in their relationship, the transition can reverse very quickly.

Diamond described dilemmas for democratic civil societies, such as little will to adapt from long-held cultures of resistance and mobilisation. He also stressed the importance of building and maintaining relationships with international donors during and post-transition. Relationships in political parties must be fostered carefully.

Keeping sight of the bigger picture is crucial.

Political progress and their processes should be valued, and society must participate in the country’s development. Myanmar’s education sector is arguably the most important to reform. While the Department of International Relations is one of the few institutions which is making headway, we should not lose sight of how far the country has come and is yet to travel.

As for the department’s political science students, they have mixed thoughts about Myanmar’s political development.

“I see myself as a student of the ‘political science experiment’,” said one.