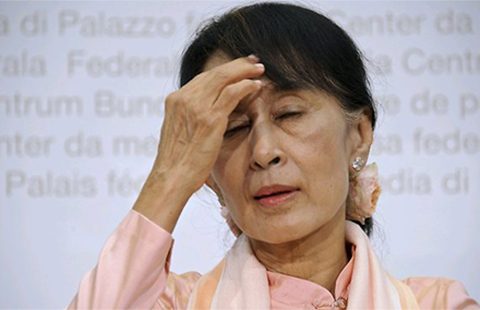 The taming of the NLD… by the NLD With the omission of several prominent figures from the National League for Democracy’s (NLD) party list for the upcoming general election, Aung San Suu Kyi (ASSK) appears to have accepted the military’s terms of engagement.

It’s another example of an unsettling trend of moderation often seen among marginalised parties.

After the release of the NLD’s list of 1,090 candidates, Myanmar’s Generals can breathe a sigh of relief, safe in the knowledge that their road map to ‘discipline-flourishing democracy’ is being followed as planned.

In another telling sign, ‘the Lady’ has rejected the nominations of all but one aspiring candidate from the so-called ’88 Generation’ group – activists who took part in 1988’s mass student protests against General Ne Win’s misguided Burmese Path to Socialism.

Of the 88 Generation activists still alive and active – and who weren’t forced into exile, murdered by the army, or had their voices silenced otherwise – over a dozen applied for her patronage. They form a vanguard of opposition against the regime.

Moreover, their visibility continues to serve as a powerful reminder of even darker times of that brutal crackdown, which continues to hang over the moral conscience and integrity of the military, and its search for redemption.

The 88 Generation Group’s bravery in the face of persecution juxtaposes the concessions made by ASSK. The omission of key activists is extremely significant.

Among the rejected hopefuls, perhaps most surprisingly, was the student leader of the 1988 protests, Ko Ko Gyi, who had previously confirmed that he would stand for election in the NLD. Many other loyal party members, assured of support in their local townships, have also been questionably stripped of patronage by the NLD’s central committee.

However, there is a silver lining; there are still some notable candidates on the party list, including Susanna Hla, a women’s rights activist, and Nay Phone Latt, a champion of free speech. Yet, the promises of AASK in nominating more ethnic minority and female candidates have also appeared contradictory in practice: only 15 per cent of the candidates are women (with the ethnic minority figure being unavailable).

While many supporters and rank-and-file members of the NLD are said to be outraged by the selections, some going as far as resigning, including 12 candidates who managed to make the list, the decision represents a predictable pattern of behaviour undertaken by leaders of radical, counter-elite parties when bestowing patronage.

What we see now is the dissociation and isolation of many of the more radical elements of ASSK’s party who would potentially otherwise refuse to collude with the Union Solidarity and Development Party (USDP) in the National Parliament, the hluttaw.

It is also worth noting that the very design and features of the hluttaw itself, including a lack of private offices for its representatives and the encouragement of cross-party committees, favour coalition-building and consensus decision-making.

Evidently, the last thing ASSK wants are trouble-makers who will try and push the Generals too far in her new parliament, which could ultimately lead to a repeated cycle of military action against the NLD.

Earlier this year, acknowledging the existential threat that she might pose to military interests, and subsequently, to her own party as a result of pushing the envelope too far, ASSK went out of her way to pledge that she would not be a ‘bully’ if she won by a landslide.

So what’s to be made of all this? Well, it is clearly an indication of an emerging ‘discipline-flourishing democracy’, as espoused by the military 10 years ago. But on a deeper level, the most interesting assessment is provided by political thinker Michel Foucault, author of Discipline and Punish.

The power of ‘discipline’, according to Foucault, is an overbearing means of surveillance over populations (he imagines discipline working like the modern ‘panopticon’ prison system). It establishes subtle forms of control in modern society, and maximises utility; making modern societies more productive without the need of carrying out actual physical torture.

Arguably these processes can be likened to the aesthetic changes that are gradually taking place in modern Myanmar. In turn, everyday political and social life becomes subjugated by mere reminders of punishment.

Later in his life Foucault brought in another mechanism of power into his critique, ‘governmentality’. This roughly represents a type of power in which ‘a conduct of conduct’ is established – teaching others to govern themselves.

These are the processes by which governments set the bounds of acceptable conduct in society and opposition forces by embedding disciplinary techniques into their subjects’ social psychology (the interaction between individuals and groups and the effect of society on behaviour).

Once established, individual, societal and political processes self-regulate and realign themselves to concepts and reasoning prescribed to them by ruling powers. The ultimate aim is that rulers don’t need to intervene as directly with their subjects as they did before in order to regulate dissent.

The NLD’s recent ‘toning down’ of its candidate list raises serious questions.

Could it be that ASSK is demonstrating Foucauldian mechanisms of modern control by realigning her party’s stance? Could her actions – of excluding potential candidates that may have constituted thorns in the side of the USDP – be attributable to her party’s inclusion in the democratic process? Do these latest actions indeed expose a successful, and seemingly passive, internalisation of the USDP-led agenda into the NLD leadership’s conscious decision-making?

There are still 30 candidates who haven’t been named, mostly from peripheral regions. ASSK may still pull out a surprise number of radical hardline and minority voices.

This, however, is doubtful; meanwhile, the questions are mounting.

The latest candidacy selection saga overwhelmingly shows the success of the Generals in engineering ASSK into a lame duck in wolf’s clothing.

Myanmar’s various post-independence regimes have frequently looked for new and innovative ways to establish a united front and crush dissent.

Perhaps their foray into parliamentary democracy may prove to be the most efficient and overtly bloodless way to neutralise, normalise, and regulate society.

Timothy Simonson is a master’s student at the School of Oriental and African Studies, University of London.