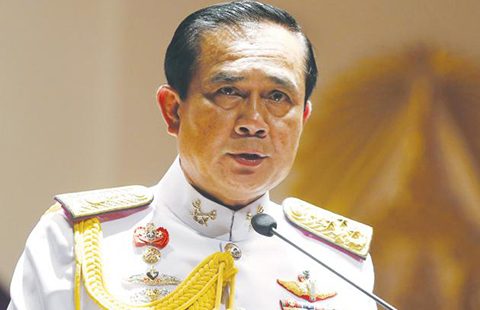 Thailand’s rulers have made doublespeak a central strategy of its rule and turned it into an art of absurdity.

During the first year following the coup by the National Council for Peace and Order (NCPO) on May 22, 2014, the junta in Thailand summoned at least 751 people, including a large number of intellectuals, leaders of local political networks, and those whom the junta considered opponents. These people were variously detained, interrogated, intimidated, or simply warned to cease their opposition to the coup. Some were subsequently charged, but most were released after signing a document that they would not engage in any political activities against the junta.

The junta told the Thai public that the purpose of the summons was “attitude adjustment”.

During the first year under the junta, domestic criticism has been swiftly and, often publicly, punished. Academic and public forums on politics are disrupted or cancelled, or at the very least subject to surveillance. Highly-politicised prosecutions against those accused of lèse majesté and politicians associated with the previous government take place with little attention to due process. Resource grabs across the country at the expense of rural citizens’ land and livelihood are widespread. All of this takes place in the name of “reconciliation”.

“Reform” is another keyword used by the regime to describe the changes enacted via junta order or envisioned in the draft constitution. But rather than improvement, these measures amount to winding the clock back 30 years with respect to democracy, decentralisation, and the role of the military in politics.

This “reform” is pushed ahead under the slogan “Marching Forward Thailand” in order to “Give Happiness Back to People” despite ongoing suppression, injustice and gloomy economic news.

For the NCPO, reconciliation means the elimination of apparent social or political conflict. Attitude adjustment means accepting indoctrination by the junta obediently. Reform means going back to a time before democracy. Orwellian doublespeak is rampant in the NCPO’s Thailand.

Doublespeak is neither new nor specific to Thailand. In 2010, the government under Abhisit Vejjajiva ordered a violent suppression of red shirt demonstrations in central Bangkok and referred to the crackdown as “taking back the space”. During the ‘New Order’ regime in Indonesia between 1965-1998, tens of thousands were sent to prison islands under the “Humanitarian Project”. Then, as now, eloquent words do not mask the violence behind the need to obfuscate.

First, the junta’s doublespeak is effective primarily because their supporters, the powerful and wealthier sectors of Thai society, share similar understandings of these key concepts. To the junta and its supporters, democracy means rule by uncorrupt and virtuous people who can bring “harmony,” another ubiquitous term in Thailand. They believe in the uniqueness of “Thai-style democracy” with governance by “good people” ruling in the name of the benevolent monarchy. The means by which this kind of rule is achieved is less important than its moral integrity. They contrast this with Western democracy, which they argue results in the election of corrupt politicians by ignorant people.

This is the legacy of age-old Buddhist Dharma politics. After all, “good governance” in Thai is translated literally as “governance by Dharma,” or governance by divine law. “Harmony” which means the maintenance of social order and the absence of serious conflict, is the hallmark of governance by Dharma. Within this framework, reconciliation does not involve truth or justice, but rather the appearance of harmony with dissent swept neatly under the rug.

Second, there is a huge gap in the understanding of these keywords between the junta’s domestic supporters on the one hand, and its domestic dissidents and the international community on the other. The junta knows that a large sector of population opposes their rule and is not fooled by doublespeak, not even for a moment.

The junta is aware of this failure, but continues to employ doublespeak to consolidate its domestic supporters. The junta thus must deal with the gap between their supporters and opponents, particularly the international community. Domestic critics face intimidation, arrest, and detention. In response to criticism from the United Nations, Amnesty International, Human Rights Watch, and democratic governments around the world, the junta flatly denies carrying out human right violations, restricting liberty and tampering with democracy. Heavy suppression domestically and the disregard of criticism by the international community serve the same purpose to reaffirm and strengthen domestic support.

Third, and most important, the repetition and extension of doublespeak over time, combined with the criminalisation of criticism of the junta, denies the truth and produces impunity for state violence. When the current regime misnames detention and torture as “attitude adjustment,” they are following a well-worn path. There have been many previous incidents in which the Thai state suppressed its citizens, including killing them, without any concern of being held to account.

Most recently, when a historic process meant that Abhisit Vejjajiva and company were charged in late 2013 in the criminal court with premeditated murder for their role in the 2010 bloodshed, they maintained that they did not order a crackdown, but aimed to “take back the space” occupied by the protestors. Under legal conditions that remain murky, the charges against them were dismissed following the most recent coup.

The current junta continues to insist that they are reformers working tirelessly for reconciliation in order to return happiness to people, not dictators. They know well that the judiciary is either firmly on their side or at their disposal to legalise their doublespeak and to absolve their wrongdoings.

But as opposition grows, most recently the peaceful protests on the one-year anniversary of the coup that led to the arrest and detention of more than 50 students, cracks are appearing in the fa├зade of normalcy created by the junta’s doublespeak. Although they were released without charges being pressed at the time, the delayed summoning of at least 11 students to hear charges against them on 8 June is another example of doublespeak in action. The junta may hope that they can ride out the discontent. They may hope that the history of impunity will ensure that time is on their side.

The current junta has made doublespeak a central strategy of its rule and turned it into an art of absurdity. It is incumbent upon all of us who are concerned about the Thai people to name “Thai-style democracy” by the more correct name of old-fashioned dictatorship.

Thongchai Winichakul is a Professor of History at the University of Wisconsin-Madison.

Tyrell Haberkorn is a Fellow in the Department of Political and Social Change at the Australian National University’s Coral Bell School of Asia Pacific Affairs.

Read a Thai version of this article at Prachatai.