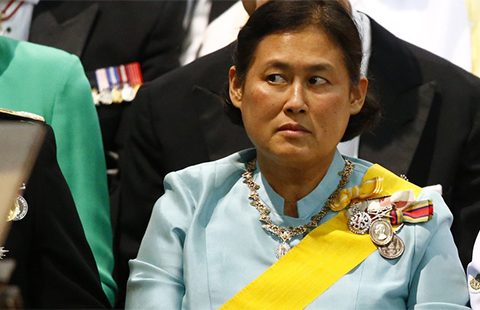 The Thai princess and her loo by the lake When nature calls waste is no issue for a royal.

Thai Princess Maha Chakri Sirindhorn, who is visiting Cambodia for three days this week, has had her own personal bathroom constructed for the one night she spent at Yeak Lom Lake on Monday.

The eight-square metre building lies on the shore of the popular lake and was constructed at the request of the princess using imported materials from Thailand, complete with its own air conditioning system.

The manager of construction for the company tasked with building the Princess’ powder room, Mr Pursat, stated “I don’t know how much we spent for the bathroom… actually, I do know, but I’m not permitted to tell you.”

The Thai company received special design instructions from Bangkok, including a command that the toilet be thrown out after the Princess’s departure. Additional toilets were also constructed for the Princess’s delegation, despite public toilets being available in the area.

Critics have lashed out at what is perceived to be wasteful extravagance in a country where many lack access to adequate sanitary facilities — particularly since the cost of construction was estimated to be 66 times greater than the average yearly income. Others argue that the episode highlights a deep disconnect between Thai royalists and reality.

Mish Khan is New Mandala’s Associate Editor and a third-year Asian studies/law student at the Australian National University. This article is part of her regular Southeast Asian snapshots.

Editor’s update (25 February): According to this report in The Guardian the loo remained unused.