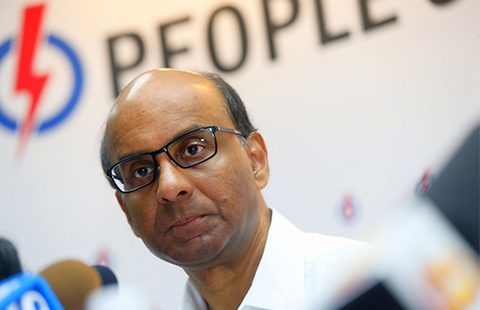 Is Singapore ready for a non-Chinese leader?

After storming to victory in this month’s elections, Singapore PM Lee Hsien Loong was quick to address one key issue; the need for leadership renewal in his new cabinet.

Almost immediately, the recurring question of the prime minister’s successor was raised by the public, news and social media.

What stood out in all this ‘buzz’ was Deputy Prime Minister Tharman Shanmugaratnam’s popularity and appeal.

Unsurprising, considering his constituency garnered the biggest winning margin of 79.3 per cent in the elections. This is in comparison to PM Lee Hsien Loong’s 78.6 per cent.

Mr Tharman is somewhat of an outlier. In a cabinet dominated by ministers who were recruited from the military, he has spent most of his professional life in the finance sector.

But in the 2015 election campaign it was Mr Tharman, more than any other cabinet minister, who was able to win over the hearts and minds of an electorate that had grown disenchanted with and increasingly cynical of the government.

He was able to defend the government’s stand on social welfare and explained how the government is moving away from its authoritarian nature to one that moves with the people.

Whether one agrees with Mr Tharman or not, his delivery was so persuasive that even the staunchest critics and members of the opposition could not help but take notice, with one opposition candidate stating that he is the ‘most brilliant’ of our current ministers.

Despite his appeal, the issue of whether Tharman could be Singapore’s next Prime Minister puts the ruling party in a predicament. First it raises the possibility of an individual from an ethnic minority (he has Tamil ancestry) becoming leader of a country where the majority are ethnic Chinese. Second, it has clear implications for the long-ruling People’s Action Party (PAP).

As early as 1988, long-time leader Lee Kuan Yew raised the possibility of a non-Chinese prime minister for Singapore. However, with its Chinese majority, in the years after independence all of Singapore’s leaders have been Chinese.

The world is very different now. In less than a decade, we have seen the likes of Barack Obama elected as the first African American president of the United States and Julia Gillard becoming the first woman prime minister of Australia.

Singapore is also a very different society from 20 years ago. The common spaces that we share – like the education system and national service – have changed and grown stronger. It is arguable that our mindsets have changed and we have become more open-minded and accepting of a leader from an ethnic minority. Surely, this society is both open and progressive in its attitudes toward the idea of a non-Chinese PM.

Perhaps the biggest obstacle to Mr Tharman becoming prime minister is his own party. Leadership in PAP is very much ‘top down’, based on the long-standing cadre system that was put in place to prevent attempts at ousting those at the apex of the pyramid. As Michael Barr points out, this system is ‘extraordinarily brittle’.

On top of this, historically PAP leadership transitions have never taken place cleanly. In 1990, when Mr Goh Chok Tong succeeded Lee Kuan Yew as Prime Minister, it was not a complete transfer of power.

Mr Lee remained in the cabinet as Senior Minister, and more importantly did not relinquish his post as Secretary-General of the PAP. It would be a further two years before Mr Goh would take over as Secretary General.

Instead of handing over power and enabling a new line of leadership to take over, Mr Lee continued to remain in the cabinet, retaining influence and authority and undoubtedly shaping policies until his resignation in 2011.

It would be rather unfortunate if a similar situation plays out with Mr Tharman.

He may be from the same generation as PM Lee Hsien Loong, and only serve as a stopgap until the fourth-generation of leaders are ready, but it is clear that Mr Tharman will set a different tone and disposition for the PAP leadership and for Singapore. But he can only do this if he is able to operate without hindrance and constraints.

Singaporeans are living through a time of significant social and economic change both at home and around the world. It offers us both challenges and enormous opportunities.

What we need is a different style of leadership, one that is less conservative and more audacious, enabling us to take advantage of opportunities and set a course of action to mitigate the challenges Singaporeans face.

Prime Minister Lee Hsien Loong is expected to unveil his new cabinet in coming weeks. Speaking to business leaders at the Singapore Summit 2015, he stressed that succession planning would be pursued ‘deliberately and aggressively’.

It would be interesting to see the shape and form that this cabinet takes and the role that Mr Tharman will play.