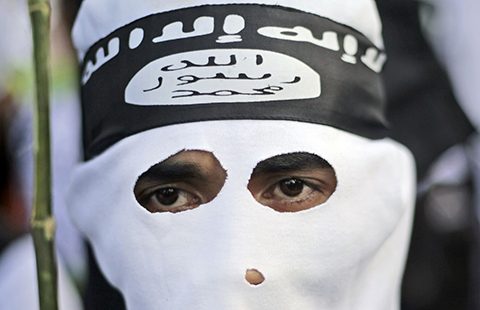 The ties of terror that bind A city worker paints over an IS flag on a wall in Surakarta, Indonesia. Photo by AAP.

Countering Islamic State is a way to strengthen Australia-Indonesia relations.

The emergence of the Islamic State (IS) in Syria and Iraq in early 2014 has refocused Australian government attention on terrorist threats abroad, particularly in Indonesia.

IS has dramatically changed the dynamics within Indonesia’s jihadist communities. It has had a deeply polarising effect on jihadist attitudes, with some well-established jihadist leaders and groups committing themselves to the new state and its caliph, al-Baghdadi, while others emphatically declare their opposition to it.

What has attracted many of these jihadists to IS is its ability to defeat ‘infidel’ forces in battle, to conquer and hold territory, and to establish a functioning caliphate within which Islamic law is comprehensively implemented. These practical and symbolic aspects of IS give it great potency in the minds of many jihadists.

According to the latest Indonesian police figures, 202 jihadists are known to have joined the conflict in Syria and Iraq. Of these, more than 30 have been killed in action and 11 have returned home.

Several major concerns arise from IS’s activity. First, IS has succeeded in re-legitimising the concept of attacking foreign non-combatants, especially non-Muslims. Most Indonesian jihadist groups had moved away from this foreigner-centric viewpoint since the mid-2000s and had concentrated their efforts either on Indonesian officials, such as police and prosecutors, or on non-violent outreach and educational activities.

Following IS’s emergence last year, web and blog-sites espousing its views have quickly sprung up, often featuring translations into Indonesian of IS publications such as its glossy online Dabiq magazine. This has fostered discussion in jihadist circles that foreigners in Indonesia are valid targets.

Second, there is a heightened risk that returning fighters from Syria and Iraq will pass on their technical skills in fields such as bomb making, sniping and covert operations to less experienced recruits. In recent years in Indonesia, many of the newly emergent terrorist cells have comprised young, ‘clean skin’ jihadists who are highly motivated but lack the expertise to mount large attacks. Thus, IS veterans might enable a new generation of Indonesia-based terrorists to acquire the highly lethal capacity that the perpetrators of the 2002 Bali bombing – most of whom were Afghanistan veterans – possessed.

Indonesian government responses to IS threat have been far more concerted than earlier efforts against terrorist groups such as Jemaah Islamiyah (JI) and the Noordin Network. Senior government figures from the president down have condemned IS and the movement was outlawed in mid-2014, something that never happened to JI. Police have arrested several dozen people for suspected IS-related activity but most have been released without charge.

Government funding has also been forthcoming for community-level anti-IS campaigns, resulting in many hundreds, possibly thousands of villages across the country displaying anti-IS banners and posters.

It should be noted, however, that much of this government and community opposition to IS is more a product of the perceived threat which the movement poses to Indonesian nationalism rather than an objection to its advocacy of terrorism or revulsion at its acts of brutality within its own borders. Much of the official discourse against IS focuses on its seditious impact rather than its extreme violence. For the Australian government, the rising threat of terrorism in Indonesia poses serious concerns. Pro-IS jihadists probably regard Australian citizens and assets as suitable targets, and indeed, Australia is often mentioned as an enemy in jihadist literature. Almost one million Australians visit Indonesia annually, mainly to Bali, and there are thousands more who are resident in the country.

Unlike a decade ago, there are now fewer opportunities for Australian police to assist their Indonesian counterparts with new technology and in-the-field collaboration. Indonesian police now have sophisticated databases and computer analytical tools, as well as vastly improved forensic capabilities compared to the time of the 2002 Bali bombings.

Perhaps the single most effective option remains that of maximising counter-terrorism cooperation between the two nations’ police forces. In particular, greater effort could be made to improve the effectiveness of the National Counter-Terrorism Agency (BNPT).

At present, BNPT’s de-radicalisation and terrorist disengagement programs are patchy and ineffective, and its analytical capacity in tracing ideological and organisational trends in the jihadist community is also limited. As a result, much of BNPT’s counter-terrorism outreach fails to target those groups most susceptible to terrorist recruitment and instead gives too much attention to mainstream attitudes.

Broader Australian-sponsored programs for exchange between the Muslim communities of both countries will also serve to undermine some of the negative stereotypes that exist about Australia’s treatment of its Muslim citizens.

Australia should also resist efforts by the Indonesian military (TNI) for a greater counter-terrorism (CT) role. The current Defence Minister, ex-general Ryamizard Ryacudu, and the TNI commander, General Moeldoko, have declared their interest in TNI sharing or leading CT efforts with the police. This would be a regressive step as the military have little expertise in terrorism investigation and analysis and are inclined to heavy-handed approaches that may well exacerbate tensions between the state and hardline Islamic groups.

By contrast, Indonesia’s police have an excellent record in detecting and apprehending terrorists, as well as managing released jihadists. Unfortunately, in one of his few public remark on terrorism since becoming president, Joko Widodo warned police that he would hand over counter-terrorism operations in the trouble province of Central Sulawesi to TNI if the police failed to catch the MIT leader, Santoso.

In responding to the rising IS threat in Indonesia, the Australian government should seek to avoid some of the mistakes of the immediate post-Bali bombing period. At that time, much our public diplomacy was simplistic and condescending.

Australian political leaders regularly lectured Indonesian Muslim leaders regarding the nature of their faith and need to combat terrorism within their communities. Muslims were boxed into simple moderate versus radical categories and foreign non-Muslim leaders often sermonised about the ‘true nature of Islam’ being peaceful, despite knowing little or nothing about the faith. This often irritated Muslim leaders and reinforced impressions that Australia was using counter-terrorism to cloak strategic or ideological motivations.

Australia should rightly maintain counter-terrorism as a high-priority in its relations with Indonesia. But avoiding glib or reductionist rhetoric on the matter will ensure a more sympathetic reaction. In the domestically focused Widodo era, Indonesia can be expected to respond best to Australian initiatives if they are seen as serving a national interest.

Countering IS in one field where both nations share a clear mutual interest.

This article is based on the latest paper in the ANU Strategic and Defence Studies Centre’s Centre of Gravity series, ‘A strategy towards Indonesia’.