Every Friday, New Mandala’s Indonesia Votes editors and guest contributors will bring you something different, something we wanted to highlight, something a little bit off-the-wall. In a week dominated by news of Jusuf Kalla, here’s four bits of news that you may have missed…

In news that won’t have shocked a nation, Indonesia’s ‘Dangdut King’ Rhoma Irama has officially relinquished his presidential ambitions. He made the announcement during a press conference held last Friday at the ‘Rhoma Irama for the Republic of Indonesia’ headquarters in Jakarta.

Rhoma’s presidential bid, undertaken through the National Awakening Party (PKB), was widely dismissed as little more than a bit of lowest-common-denominator populism on the party’s part. Yet it would appear that the singer popularly known as ‘Bang Haji’ believed himself a genuine contender in the presidential race, citing his disappointment at PKB’s skewed ‘vision and 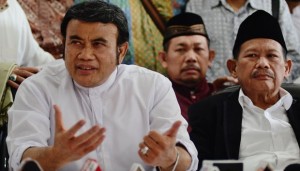 mission’, and its failure to credit his contribution to a strong electoral result, as the reasons for his abandonment of the party.

After PKB won 9% in the national legislative poll, plenty of observers joked that the ‘Rhoma effect’ had surpassed the much-anticipated ‘Jokowi effect’ – a claim that Rhoma himself seems to have taken at face value. Following his ‘withdrawal’ from the race, Rhoma predictably threw his support behind the Prabowo-Hatta campaign: only a few days previously, his daughter Debby claimed she would leave the country if Jokowi were ever to become president. 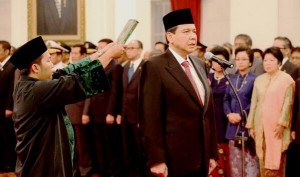 This week saw another of Indonesia’s media moguls, Transcorp’s Chairul Tanjung (owner of TransTV, Trans7 and Detik.com) become a minister. Chairul has for years been rumoured to be close to SBY and Partai Demokrat, but always responded by saying he wasn’t interested in politics (they always say that, don’t they?). Chairul is now Chief Economics Minister in SBY’s government, after being nominated as Partai Demokrat spokesman earlier this year. Forbes magazine (2012) estimated his wealth at USD3.4 billion, and Indonesia’s 5th richest person. If Partai Demokrat was worried about where they might get their money from in the post-SBY era, they no doubt are looking more directly at Chairul. But Partai Demokrat already has a media mogul – Jawa Pos group’s Dahlan Iskan, after he ‘won’ PD’s Convention late last week. Is there room for two powerful media moguls in the one party? The Surya Paloh – Hary Tanoe NasDem disaster suggests not. But let’s face it, with only 10% of the vote in the April 9 elections, PD needs all the help it can get. The politics of flying have been an amusing sideshow in this election. Joko Widodo made it a part of his down-to-earth schtick to be seen travelling economy class on domestic flights. Choosing a seat at the back of the plane maximised the chances of his being photographed by starstruck passengers, who often shared the pictures on social media. His volunteer team’s account even used this image to illustrate his concern with ‘staying in touch with the people’:

But Jokowi’s style of campaigning has changed, and so has his choice of air travel. After Jokowi took a chartered flight to campaign stops in Kalimantan and Malang along with PDI-P officials, a photo of the aircraft taken by yours truly briefly became a minor PR annoyance for the campaign when Golkar politician Indra Piliang tweeted it as evidence of Jokowi’s hypocrisy.

Prabowo Subianto is also accustomed to flying in luxury, as a long-time user of a Brazilian-made Embraer Legacy for his travels throughout Indonesia and abroad. No word yet on how Hatta Rajasa (the ‘poorest’ of the candidates after Jokowi) will be travelling, but we can presume that it will be both comfortable and expensive.

What’s the bigger story–that the vast expense of chartering aircraft inevitably has to be picked up by rent-seeking campaign donors, or that so many of Indonesia’s politicians are wealthy enough to possess their own jets?

4. End of an underworld The only news bigger than the presidential elections this week in Indonesia was the closure of Stadium nightclub by defacto Jakarta governor Basuki Tjahaja Purnama after a low ranking police officer died of a drug overdose. The club’s notoriety was amplified by its 24 hour open door policy on the weekend and the wash of amphetamines that were accessible inside. Social media received the news with mixed emoticons; happy faces from the middle class killjoys who thought the club was a blight on the city’s moral mores, sad faces from all of Jakarta’s trance-loving denizens.

Stadium’s egalitarian door policy was remarkable given the club’s significance to the political elite. My own final visits to Stadium were in what I would call a “professional research” capacity. The last was with some mid ranking police officers. The time before that was with a shadowy Bulog broker and a bunch of Betawi gangsters. For the state elite, Stadium was a central hub to chew the fat, to meet and greet, to work out deals and to make networks that cross sectors and institutions, but most importantly, Stadium to create the experiential bonds that fruit political and economic career benefits later. Gifting amphetamines and girls are part that emotional knit. In this way, Stadium was less the source of the city’s corruption than just another symptom of it.